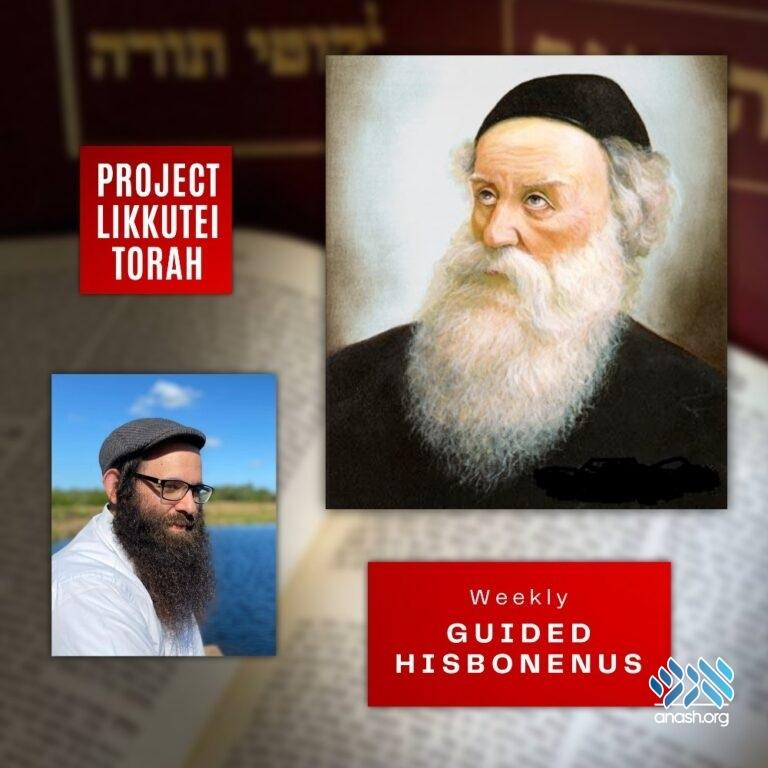 Starting today, Lag Baomer, the Matan Torah of Penimius HaTorah, Project Likkutei Torah (PLT) will be producing a weekly 5-10 minute Guided Hisbonenous. It will take a few concepts from that week’s (Torah Or/Likkutei Torah) and have a distinguished chossid share how he personally does Hisbonenous on those topics.

PLT has been creating daily content to learn one Daf per day of Torah Or and Likkutei Torah and finish both seforim over a one year period. 500 daily participants have joined since the project was launched a few months ago.

To receive the weekly episode of Guided Hisbonenus:

The presenter is Rabbi Yirmi Caspi. We sat down with Rabbi Caspi and asked him some questions on this project.

Tell me about your background and how you got into chassidus chabad and hisbonenus?

As a seeker of truth I found in Chassidus Chabad a clear, methodical path of spiritual practice, a derech in avoidah that transformed me from the inside out. This was refined by learning the  darchei chassidus and “eating the kasha” in Tomchei Temimim of Melbourne, Tiferes Morristown and Tsfas, enhanced in Kollel Menachem, Melbourne and continues to this day.

Hisbonenus and avoidas hatefillah was always a natural emphasis from the beginning of my learning, taking at face value the fact that it is the explicit emphasis and spiritual practice of Chabad chassidus. Without it, Chassidus felt to me like a bunch of important ideas that are not being put into practice. With it, Chassidus  becomes G-dly realities that are lived and breathed. It was always a no brainer for me.

It seems like for dor ha’shivii the Rebbe emphasized hamase hu ha’ikar more than perhaps anything else. Should there still be an emphasis on hisbonnenus for our generation?

From Hayom Yom to the sichos of Nun Beis, and throughout all the sichos, Igros and Maamorim in between, there are hundreds of places where the Rebbe speaks about the avoidah of Hisbonenus and avoidas hatefillah without qualifying that it is not relevant today. True there is an emphasis on action and working with others, but that doesn’t mean that one should no longer speak or think, or work on oneself. On the contrary through working on oneself through Hisbonenus and avoidas hatefillah a chasid will have a more profound impact on others and one’s thought, speech and action will become united to achieve the practical responsibilities that the generation, hiskashrus to the Rebbe and moment requires.

Is just learning chassidus enough, or is hisbonnenus a necessary follow up?

Hisbonenus helps to internalize what one learns, translates it to the nefesh behamis so it too can be transformed, and to connect to the Elokus that lays under the surface level of the intellectual ideas. If a person can achieve that without Hisbonenus and avoidas hatefillah then fine, but for most people that will not be the case, and Hisbonenus and avoidas hatefillah is the tried and tested method in Chabad  to achieve these goals.

How will regular hisbonenus help me in my avodas Hashem (and mundane affairs)?

What is a Guided Hisbonenous  and how is it different from guided meditation?

Most guided meditation tends to be variations of relaxation meditation such as focus on breath, present moment or a pleasant scene, etc. They tend to be repetitive, boring and insubstantial. Guided hisbonenus is content rich contemplative meditation based on applying the fundamental  themes of Chassidus, engaging the mind, heart and jewish neshama.

What are your goals for the guided hisbonenus weekly podcasts?

To make Hisbonenus accessible for all Chabadniks who know they are meant to be doing Hisbonenus based on the directives of all the Chabad Rebbeim, but who for whatever reason don’t know how to do it. And to open up chassidus to the wider public in a positive and experiential way that can be a meaningful and kosher alternative to the various forms of goyish meditations that are popular today.

I heard the shiur on meditation during davening. It has the power to influence and inspire others to develop more in their spirituality.

Rabbi Yirmi Caspi is well versed in the study of Kabbalah from the original texts and their explanations in the writings of Chabad Chassidus. In addition to his scholarship, Rabbi Caspi strives to internalize and apply Chassidus in עבודה שבלב זו תפלה – the service of the heart or prayer, as was intended by our Rebbeim.

Rabbi Caspi shlit”a is known for his broad knowledge of Kabala and Chassidus as well as his friendly personality. May his shiurim be an uplifting  experience.

Project Likkutei Torah is a grassroots initiative to learn one daf of Torah Ohr / Likkutei Torah, the “Chassidishe Parsha,” each day, while learning an additional daf of Likkutei Torah Shir Hashirim each Shabbos.

Following this study one will complete the entire Torah Or and Likkutei Torah in roughly one year!

The Rebbe suggested many times including parshas Chayei Sara 5752 that Chassidim make a goal to complete the entire Torah Or & Likkutei Torah.

This Project is making this learning cycle more approachable and accessible by creating shiurim shared via various podcasts and online videos, in addition to curating summaries and daf with nekudos from other sources clearly presented in an accessible cloud drive.

To join the WhatsApp group for the material on the shiurim for the Daily Daf click here.

Project Likkutei Torah is sponsored in part by a generous donation from Rabbi Meyer and Shaindy Gutnick.

The Weekly Guided Hisbonenous is sponsored in memory of Sprintza bas Hershel.

“We are also excited to announce that a new 3-year track will begin this coming Tishrei bezras Hashem” – Says Rabbi Betzalel Bassman, who spearheaded this project in memory of his mother, מרת פיגא בת בצלאל הכהן הכ”מ.

“I am blown away with the excitement and positive feedback about this project” says Yaakov Cahnman, Project Manager.

Project Likkutei Torah is a project of the Hilchasa K’Rav Institute directed by Rabbi Betzalel Bassman and Rabbi Avrohom Jacks.

Yasher koach to Rabbi Avrohom Rotban and his organization Irgun Torah for assistance in the promotion of this project.