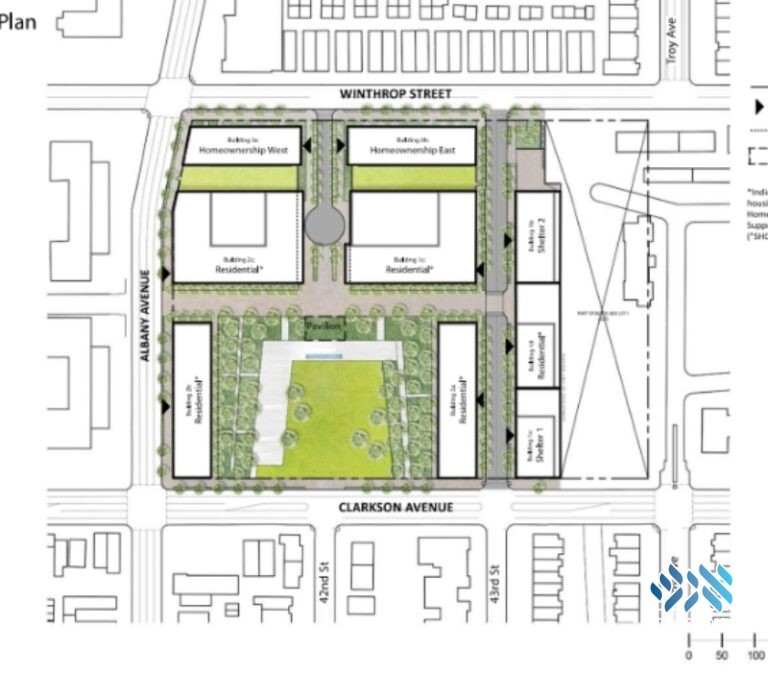 A new affordable housing development is being planned at 681 Clarkson Ave (NE Corner of Albany and  Clarkson) in Crown Heights. Community members are expressing concern that it will take away parking spots and bring more homeless people to the neighborhood.

NYS Empire State Development  (“ESD”) is in the process of bringing affordable housing to the Crown Heights Community, at 681 Clarkson Ave (NE Corner of Albany and  Clarkson). The project is also called Kingsboro West aka Sparrow.

New Parking Problems – As per NYS ESD’s Draft Scope, 681 Clarkson aka Kingsboro will create 764 units of general housing, consisting of approximately 101 homeownership units with 663 affordable housing rentals. That’s the good news.  The bad news will be ZERO parking spots for 764 units, which is unfortunately allowed according to the NYC Zoning Code.

New Homeless Dumping – As per NYS ESD’s Draft Scope, 681 Clarkson aka Kingsboro will have 326 units of new supportive housing units for the formerly homeless or homeless.  The two old existing homeless shelters will be rebuilt and contain 364 beds.  Add them up, and you have at least 690 homeless beds, or four homeless facilities on just the east side of Albany and Clarkson. There will be open entrances to 681 Clarkson Ave from Winthrop, not just Clarkson.

Across the street, on the west side of Albany and Clarkson, there are already two existing CAMBA Buildings containing 328 units of supportive housing.

At 781 Clarkson Ave, between Utica and Albany, Breaking Ground built a 110 unit transitional residence for homeless individuals in 2017.

At 329 Clarkson ( NY Av & Clarkson),  CAMBA will soon be building 146 units for the formerly homeless.

At 599 Utica Av, across from Dunkin Donuts, just north of Winthrop, is the Utica Hotel css, which is listed on google maps as a homeless shelter.

NYS AG Letisha James has to sign off and approve this project.

Environmental & Land Use Process for 681 Clarkson

Because this is NYS land and a “blighted neighborhood”, there is no ULURP which means no NYC Council approval is needed for this.  This project is going to create parking problems and the developers know it.  That’s why this project requires an Environmental Impact Statement(“EIS”). The Public Meeting for the Draft EIS will be this Jan 19, 2023 from 6pm to 8 pm on ZOOM.

If unchecked, the development on Albany & Clarkson will repeat itself until it gets to Utica Ave.

The oversaturation of homeless presents an existential problem that will be around for generations if ignored.  The addition of 764 units with zero parking at Kingsboro will take away vital off-street parking.

Legal Ways to Fight this

The Request for Proposal for this project was based upon former Assemblywoman Diana Richardson Community Advisory Meetings for the 43rd District – All the public meetings were held on Saturdays which is a due process issue for Orthodox Jews.  Additionally, the majority of the Community Advisory Members of the 43rd Assembly District Council did not live in the 43 District, based upon my searches on whiepages.com – that could be a due process reason to force this back to ULURP and NYC council review.

The deed for 681 Clarkson contains a right of reverter which is a real property interest which according to the NYS Urban Development Act Section 14 requires that the City Council approve the sale of any NYC real property interest. I recently asked NYS Assemblyman Cunningham at a BK CB9 Housing Committee meeting to ask the NYS AG  for a legal opinion on this issue.  NYS AG sent the NYS Assemblyman Cunningham an unsigned email with a link on unrelated topics of foreclosure defense for homeowners  and deed theft, which was then forwarded to me, since I asked the question.

So, to those big machas in CH who held the fundraisers for Tish James in the past, now is your chance to collect some dues by getting in touch with her and continue the vision of Greater Crown Heights.

There is strength in numbers.

You don’t need the politicians “thoughts and prayers” when something happens in the future.

You need the politicians to start choosing advocacy over party loyalty.

Tell NYS AG James to fight against NYS eminent domain law, like she did when she was in City Council.

Tell Mayor Eric Adams, that there needs to be more affordable housing for 3 bedroom apartments for families, not his “City of Yes Housing Plan which requires more studios and one bedrooms for real estate developers pocketbooks.

Tell City Councilperson Darlene Mealy that she should have never signed off on Mayor Diblasio’s ZQA in 2016 that made all of Crown Heights a transit zone which does not require on-street parking for affordable housing.

Follow the Chinese example in NYC – they protested a proposed NYC Homeless Shelter and got the City to cancel it.

If you believe in the concept of Am Yisrael Chai, show up tonight on Zoom, and let the politicians know that you know what they are doing, and Crown Heights will not be sacrificed for their political ambitions.