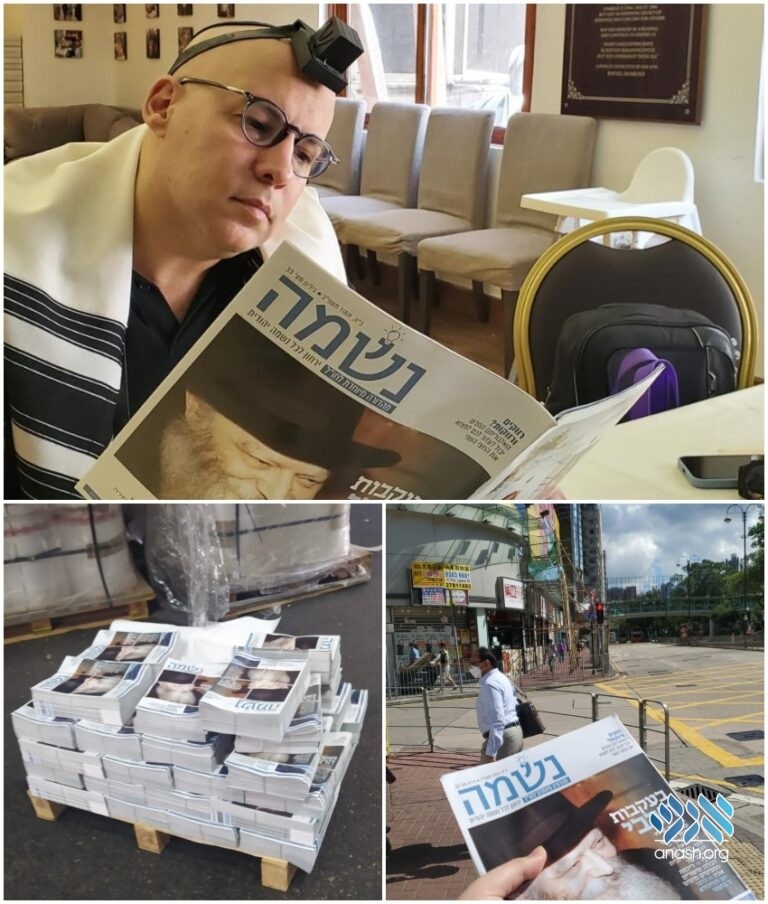 A popular Israeli Chabad magazine has been adapted and brought abroad by the Hebrew Desk at Merkos 302 for Hebrew-speaking communities outside of Israel.

The first issue of a new magazine was delivered to Shluchim around the world just before Gimmel Tammuz. Entitled ‘Neshama,’  the magazine is geared toward the Israeli communities located outside of Israel. The first of its kind, the magazine dedicated its inaugural issue as a tribute to the Rebbe.

The original Neshama Magazine has gained great popularity in Chabad Houses across Israel since it was introduced on Chanuka just two years ago. Produced by the Kfar-Chabad Weekly Magazine in conjunction with Tza”ch of Eretz Yisroel, the magazine offers quality Jewish content to the general Israeli population on a monthly basis.

In honor of Gimmel Tammuz, the Hebrew Desk at Merkos 302 partnered with Tza”ch to adapt and bring the magazine to communities across the world. Inspirational and educational articles, advertisements, and entertainment were all adjusted to appeal to the unique character of Hebrew speakers living abroad. The magazine showcased the work of Shluchim around the world, including a feature article about the Israeli community in Las Vegas. A full lineup of highly regarded Israeli authors and speakers contributed to the magazine with inspiration and thoughts regarding Yiddishkeit and the Rebbe.

“While the Hebrew-speaking community has adopted much of their local culture and interests, they maintain their strong Israeli identity,” explained Rabbi Shimon Binshtok, Director of the Hebrew Desk at Merkos 302. “We crafted all the content to appeal to this unique crowd, in their native Hebrew.”

Over 2000 copies of the new magazine were printed and distributed to Shluchim and their communities in nearly thirty locations, spanning North America, Asia, and Europe. Special subsidized prices and completely free shipping were secured for Shluchim by the Hebrew Desk, allowing them to bring the magazines to their communities at minimal costs.

“I distributed the Neshama magazine to many members of my community,” shared Rabbi Yisroel Liberman, Shliach to Kowloon Hong Kong. “It is very powerful to be able to share vibrant and authentic Jewish content; everyone loved it! They were impressed by the ideas that were covered and the beautiful design. We look forward to distributing hundreds more copies of the next issue here.”

Organizers envision the magazine being published multiple times a year, with the next issue in time for Tishrei.

“Shluchim continue to identify and address each demographic, bringing Yiddishkeit to every single Jew.  We are driven by the importance and need for high-quality tools and resources to be available to the Shluchim,” said Rabbi Mendy Kotlarsky, Executive Director of Merkos 302. ”Adapting the Neshama magazine to better relate to the communities in Chutz La’aretz speaks volumes towards this vision.”

Since its inception at this year’s Kinus Hashluchim, the Hebrew Desk has worked to create a cohesive network of Shluchim serving Hebrew-speaking communities abroad. In addition to creating new marketing materials and tools for the Shluchim, many popular resources such as CKids and CTeen have been translated and reworked for the Israeli communities. They have also worked with Shluchim to collaborate on speaking tours and joint larger events.