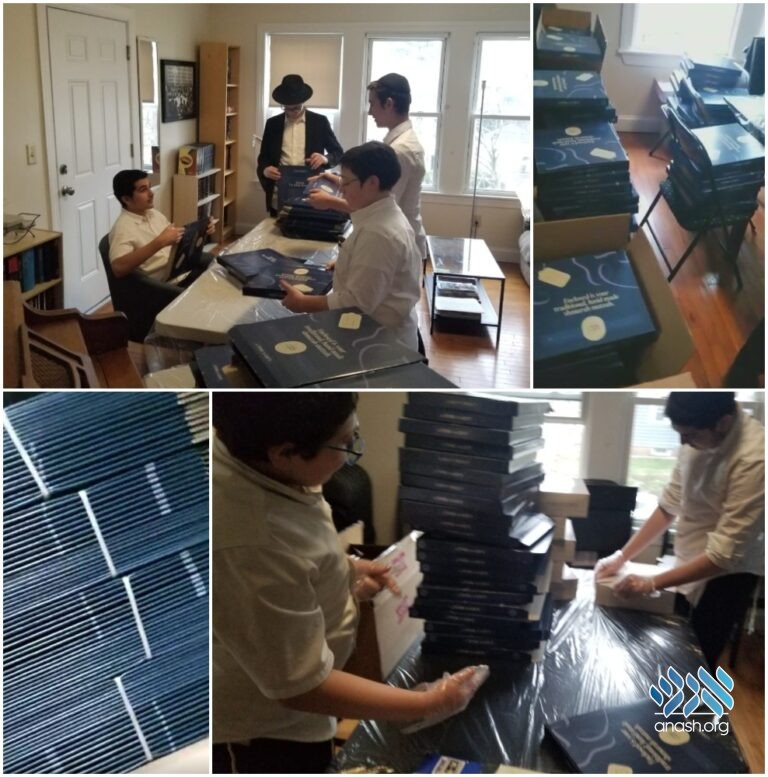 The New Haven anash community is launching a major communal initiative in conjunction with Vaad Or Vechom HaHiskashrus: to distribute shmura matzo to as many Jews as possible, especially those in the Greater New Haven area.

In anticipation of Pesach, the New Haven anash community is launching a major communal initiative in conjunction with Vaad Or Vechom HaHiskashrus: a universal campaign to distribute shmura matzo.

The goal of the project, funded generously by Ohel Yosef Yitzchok and organized by Rabbi Menachem Cadaner, is to get a portion of kosher matzo for each seder night into the hands of as many Jews as possible, especially those who live in or have a connection to the Greater New Haven area.

To date, over 30 families have each committed to distributing five individually wrapped matzo portions to their Jewish friends, coworkers, neighbors, and associates. It’s not too late to join!

The initiation of this groundbreaking campaign responds to a call to action that remains as relevant today as when the Rebbe first announced it over 75 years ago. In 1954, the Rebbe reinvigorated the custom of distributing shmura matzo. In the past, local rabbis had taken responsibility for supplying community members with high-quality matzo, but over time that practice fell into desuetude.

To reach Jews in need of kosher matzo and a seder invitation across the globe, the Rebbe called all hands on deck, tasking each of us to bring the bread of healing and faith-–round, handbaked, shmura matzos—to our Jewish brothers and sisters. This has since been adopted as an official Chabad minhag.

The Rebbe funded many of these efforts and especially encouraged sending matzo to soldiers. Similar efforts followed around the globe. The Rebbe repeatedly emphasized the importance of reaching every single Jew-–including der finfter zun, the fifth son who does not even know about the seder to attend it—and the transformative impact of distributing shmura matzo for both the giver and the recipient.

Mivtza matzo—the campaign to distribute matzo to every Jew in need—was also a foundation on which the Rebbe continued to build over the years. The Rebbe introduced it well before the other mivtzoim and incorporated it into two other landmark projects: community shluchis and Tzivos Hashem.

First, the Rebbe’s urgent and universal request in 1954 for distribution of shmura matzo prefigured the Rebbe’s broad conception of every Jew as a shaliach to help fellow Jews and promote Torah observance. And over the years, the Rebbe specifically tasked regional shluchim with distributing matzos and organizing public seders. Second, the Matzah Ball contest in 1980, which stemmed from an explosive campaign to involve children in Pesach preparations, gave rise six months later on Sukkos to the establishment of Tzivos Hashem.

The above history is an important reminder that the Rebbe made distributing shmura matzo a top priority from the beginning of his nesius. When a wealthy individual approached the Rebbe and insisted he wanted to make a large donation towards an important and lasting cause such as the dedication of a new building, the Rebbe is reported to have told him that there was no greater contribution than supplying a fellow Jew with shmura matzo.

It is the fervent hope of the New Haven Shmura Matzo Campaign that our efforts will realize the tremendous brochos the Rebbe promised, uniting our community and klal Yisroel through the bread of healing and faith.

Wherever you live-–and especially if you live in New Haven!—please join us in carrying out the sacred responsibility of ensuring that every Jew has an appropriate portion of matzo in time for each seder night. Then may we merit to see the ultimate fulfillment of the Rebbe’s Torah, marching triumphantly out of exile to greet Moshiach.