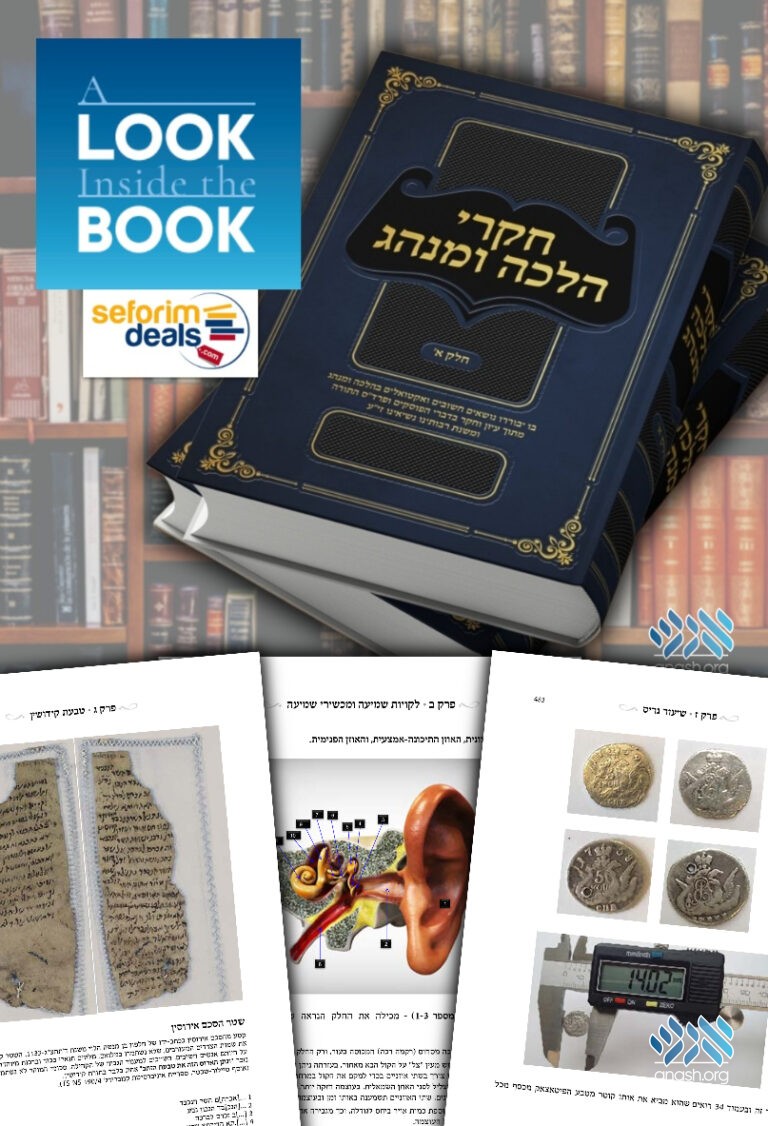 A Look Inside the Book: The genre of articles summarizing halachic discussion of contemporary issues is very popular, and many such volumes are published every year. Nonetheless, Chikrei Halachah Uminhag, a new work by an Australian rov and shliach, still manages to stand out.

Chikrei Halachah Uminhag, by R. Nir Gurevitch, a shliach and Rov in Gold Coast, Australia, is a two-volume collection of essays on practical halachic matters.

The genre of articles summarizing halachic discussion of contemporary issues is very popular, and many such volumes are published every year. These works of summary and analysis are enjoyed both by Rabbonim, who use them to help develop their own halachic positions, as well as laymen who wish to broaden their understanding of halachic issues they regularly encounter. Within Lubavitch as well, where authors naturally devote more attention to the opinions of our Rebbeim on the topics, many such works have been published in recent years.

Chikrei Halachah Uminhag is a work in this broad category that stands out due to a number of unique features. Firstly, the chapters are more thorough and comprehensive than usual. These are not brief essays or articles summarizing the key points of the halachic discussion, but extensive monograph-length works, covering the topics from multiple angles and citing a broad range of opinions. The combined 1200 pages of the two volumes of this set cover 16 different topics.

A second unique feature is the emphasis the author places on a full understanding of the background and nature of the issues he addresses. The chapters regarding medical issues such as hearing aids and prostate surgery explain the various medical issues and treatments in detail, with full color diagrams for illustration. The chapter regarding coffee and bishul yisrael explains the different types of coffee and their production processes, and the chapter regarding the size of the halachic measurement of the gris contains an incredible amount of pictures of the ancient coins and coin catalogues the author used to arrive at his conclusions.

This systematic approach and affinity for realia is not limited to the practical background for the halachic discussions. R. Gurevitch is an expert in ancient manuscripts and books, which he combs for information and variant readings that may have a bearing on the halachic issues. In appendices to the chapters, our author provides high quality color scans of the manuscripts and rare editions he used, adding a fascinating historical element to the halachic discussions.

Biographical information about the lesser known authors cited is also provided, and the history and content of particular seforim are explained where relevant.

The title page states prominently that this work is intended for study, and not to give definitive rulings. The author elaborates in the introduction on his goal: assembling sources and organizing, explaining, and clarifying them to make them easily understandable for informational purposes. Readers are cautioned not to pasken halachah from the book, but rather to consult its sources.

We will now turn to survey the content of Chikrei Halachah Uminhag. The range of topics is quite broad and eclectic. Some are about specific halachic issues, such as the question of bishul Yisrael for coffee; others present all of the halachah, minhag, kabbalah, etc. discussion related to a general matter, such as the extensive article on all things related to teeth and dental care; and yet others focus on lighter topics, such as the rule of mesaymim betov, concluding on a positive note.

In this review we will survey the content of some of the more notable chapters, highlighting the unique contributions of this work.

One important chapter is devoted to the instructions and strictures of R. Yehudah Hachasid in his tzavaah and other sources. R. Yehudah Hachasid is the source of a number of unique strictures, many of which have achieved widespread acceptance. At the same time, these stringencies are little understood, and there is much confusion about their application.

The chapter begins with an introduction about the structure and content of Sefer Chassidim and Tzavaas R. Yehudah Hachasid, and a discussion about the various versions of the tzavaah. The author then addresses the question of whether the strictures of the tzavaah were intended to be normative or perhaps only for the descendants of R. Yehudah Hachasid, concluding that the tzavaah is generally seen as normative and binding.

Some of the better known strictures of the tzavaah that are addressed include the issues of uprooting fruit trees, identical names in, shiduchim, multiple shiduchim between the same two families, and serving as a sandak for multiple children in the same family. Lesser known strictures addressed include not polishing one’s shoes on the day a person plans on embarking on a journey, and not backtracking to fetch an item forgotten behind after having already embarked on a journey.

For all of these topics, the opinions of the poskim about when and how these strictures apply are analyzed in detail, with primary importance given to the guidance of our Rebbeim on the matter.

While R. Gurevitch’s treatment of the topics is very thorough, some additional sources could have been quoted and discussed. Shivim Temarim is one of the most important commentaries on Tzavaas R. Yehudah Hachasid, written by R. Chaim Shimon Dov of Horki, a chasid of the Tzemach Tzedek. This commentary provides a detailed analysis of the tzavaah, and also includes unique shemuos from the Rebbeim and R. Hillel Paritcher.

While our author makes extensive use of Shiviim Temarim, one important shemuah is missing. In siman 33, R. Chaim Shimon Dov quotes a letter he received from his father, the well-known Rov and chasid of the Tzemach Tzedek, R. Aryeh Leib Zivov. R. Aryeh Leib writes that the Tzemach Tzedek personally told him that in two areas he did not adhere to Tzavaas R. Yehudah Hachasid, and he was punished as a result.

A practical conclusion that R. Chaim Shimon Dov drew from this report is that the Tzemach Tzedek retracted his lenient ruling allowing multiple shiduchim between the same two families. This specific conclusion is debatable, and for us the lenient rulings of the later Rebbeim on this issue are definitive, but this firsthand report from the Tzemach Tzedek is important for establishing a general attitude towards the Tzavaah, and should have been quoted prominently in our book.

To the shemuah quoted by R. Gurevitch (p. 146) from Shivim Temarim (siman 44) in the name of the Alter Rebbe about not polishing shoes before embarking on a journey, the similar but slightly different versions reported in Reshimos Devarim, p. 57 (new edition) and Likutei Sipurim, p. 44 should be added.

Another important chapter addresses prostate surgery. This is a very common issue, and it involves serious halachic questions. The Rebbe was one of the first to note the problem, and he worked to raise awareness about it. R. Gurevitch explains the medical problems and the different methods of surgery with the help of full-color diagrams, and then proceeds to present the various halachic opinions on the matter, with a focus on understanding the Rebbe’s opinion. This chapter concludes with a very important section about new methods of treatment that avoid the halachic issues.

The most unique chapter in Chikrei Halachah Uminhag is the one exploring the size of a gris, a halachic measurement used in Hilchos Taharah. The chapter focuses on the report of the Sheeiris Yehudah (siman 11) that his brother the Alter Rebbe measured the size of the gris as equal to the “silver pyatachok coin used during the time of the Empress.”

But the size of this coin varied over the years, leading to confusion about the precise size of the gris. R. Chaim Naeh (Shiurei Torah 3:20:2) wrote that the measurement is 14mm, and many Lubavitcher Rabbonim used this size. But R. Yekusiel Farkash (Taharah Kahalachah, p. 34) quoted research about old Russian coins that states that the coin in question is larger, around 16.5mm.

R. Gurevitch takes readers on a tour-de-force through the halachic sources and the sizes of ancient coins. His extensive research, presented in full-color images of ancient coins and coin catalogs, leads him to the conclusion that the coin the Alter Rebbe was referring to is indeed 14mm in circumference.

Chikrei Halachah Uminhag is an excellent and unique work. The range of topics is fascinating, the writing and presentation is in a clear style, and the full color diagrams, historical and manuscript information given makes this a uniquely valuable work.

These seforim are an important resource for Rabbonim to help them form a position on the contemporary questions raised, and laypeople will also enjoy learning more about these issues in a clear and engaging manner.