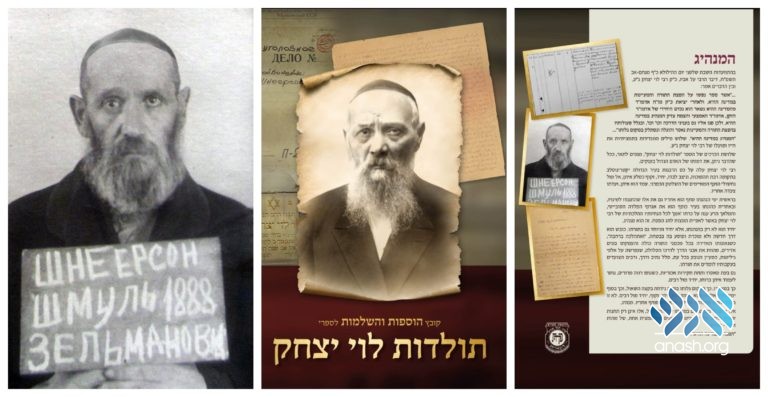 In preparation for Chof Av – 75 years – a booklet with additional information about the Rebbe’s father, Harav Levi Yitzchok Schneerson, is being published.

Last year, the administration of Kehos in Eretz Yisroel published a new edition of “Toldos Levi Yitzchok,” which is the comprehensive biography of Harav Levi Yitzchok Schneerson, first published in 5737/1977. That edition contained many additions and new revelations.

Over the past year, more material and revelations have surfaced, including unique documents pertaining to his life. All of these have been compiled into one booklet.

One fascinating revelation is the interrogation file of Harav Shmuel Schneerson, Rav Levi Yitzchok’s brother (and brother-in-law – as he was married to Rebbetzin Chana’s sister) and later Rov of Nikolayev. He too was arrested and sent into exile by the Communists.

The Russian file is 80 pages long, and it was translated into easy to read Hebrew by Rabbi Elkonoh Shmotkin and the JEM team. The file sheds much light on the rabbonus and life of Reb Shmuel, little of which was known until today. It also brings to light the relationship between the two brothers and the Rebbe, who at that time was already out of the country, as well as the dates of passing of the family patriarchs, Reb Boruch Schneur and his wife Zelda Rochel, which was previously uncertain.

One letter in the file gives the reader a peek into Reb Shmuel’s dining room. The agents that came to arrest him searched his home and scanned his library, hoping to find incriminating evidence. The interrogators were “helpless” in front of his massive library – some 1,500 seforim – it would be impossible for them to haul them all away. Instead, they sealed off the seforim room and placed Rebbetzin Rochel Yanovski, his shvigger (and Rebbetzin Chana’s mother) in charge of that room, to assure that nobody would enter…

To order the three volume set of Toldos Levi Yitzchok, the comprehensive biography of the Rebbe’s father, click here.