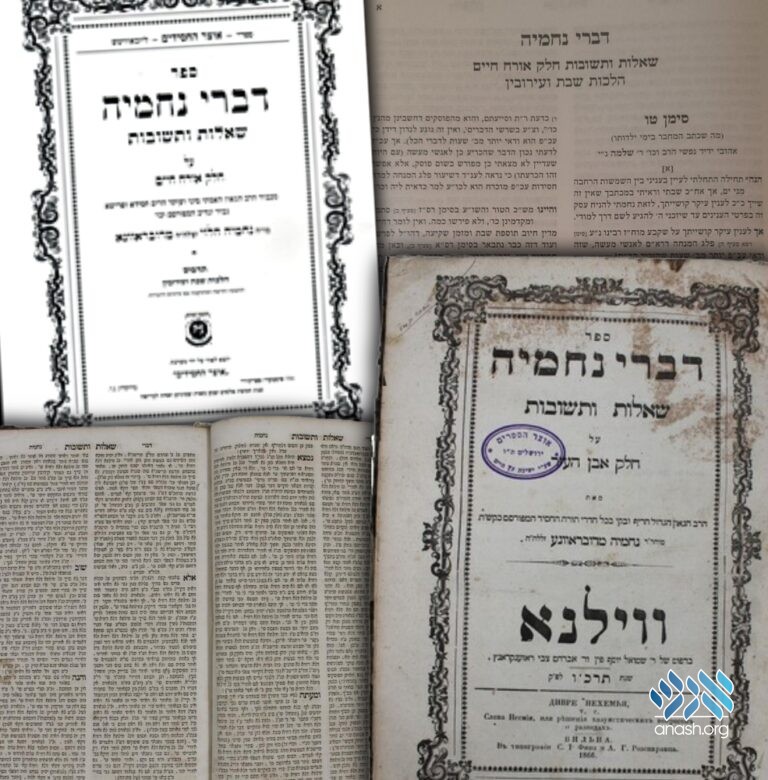 In honor of the new yeshiva year, Kehos published an excerpt from a new edition of Divrei Nechemiah, a sefer of Halachic responsa by Harav Nechemiah Ginzburg of Dubrowna, a renowned talmid chochom who was a chossid of the first three Chabad Rabbeim.

An excerpt of a new edition of a famed chossid’s responsa was published in time for the new yeshiva year, with the goal of enhancing the study of Maseches Shabbos in Chabad Yeshivos worldwide.

The new publication is an excerpt from ‘Divrei Nechemiah’, a sefer containing the halachic correspondence of Harav Nechemiah Ginzburg of Dubrowna, a renowned talmid chochom who was a chossid of the first three Chabad Rabbeim.

The author was born in 5548, one year before the Tzemach Tzedek. His father, Reb Avrohom Berach, was a chossid of the Alter Rebbe and educated his son in that path as well. After reaching marriageable age, he married the daughter of Reb Zalman Velkes, but his wife tragically passed away shortly after. He later remarried the granddaughter of the Alter Rebbe, daughter of his son Harav Chaim Avrohom.

Throughout his life, as despite being a renowned scholar, Harav Nechemiah never wanted to be supported by serving in rabbonus and chose to go into business instead. He also refrained from issuing piskei Halacha or sending responsa until the Tzemach Tzedek strongly urged him to begin.

The Tzemach Tzedek himself would send Harav Nechemya questions in Halacha, and praised his answers, once remarking that “he has the ability to be mechadesh in Torah.” On another occasion he said that he was a chariot to the Torah.

Despite his extensive writings, Harav Nechemiah did not publish any seforim during his lifetime, and the sefer Divrei Nechemiah was only published after his passing. The sefer contained responsa in Shulchan Aruch, as well as supplements to the Alter Rebbe’s Shulchan Aruch, filling in portions that were destroyed before the Shulchan Aruch was printed.

For many years, the sefer, once a staple for Chabad rabbonim and chassidim, was out of print. In recent years, Rabbi Yehoshua Blasenstein has been working on a new edition, where the responsa will be printed together with extensive footnotes. In honor of the new yeshiva year, Kehos printed an excerpt of the new sefer, containing the sections of the sefer relevant to Shabbos.

The excerpt, spanning 124 pages, contains 13 responsa, 8 simanim of likkutim and explanations on siman 345 and 363 in the Alter Rebbe’s Shulchan Aruch. The hope is that the new publication will encourage bochurim and teachers to add in the study of the practical application of Hilchos Shabbos alongside the study of Mesechta Shabbos.

“In a yechidus to the hanhala of 770 yeshiva in 5723, the Rebbe expressed his displeasure that Chabad yeshivos don’t study the chiddushim of the Alter Rebbe and the Tzemach Tzedek. The Rebbe said ‘meila Divrei Nechemiah is a sefer that can’t be found, but the others should be studied. Baruch Hashem, with the publication of the new edition, the sefer is once again available after decades, and yeshivos can fulfill the Rebbe’s hearful request,” Rabbi Blasenstein told Anash.org.

The sefer is available at Kehos and at seforim stores in Crown Heights.