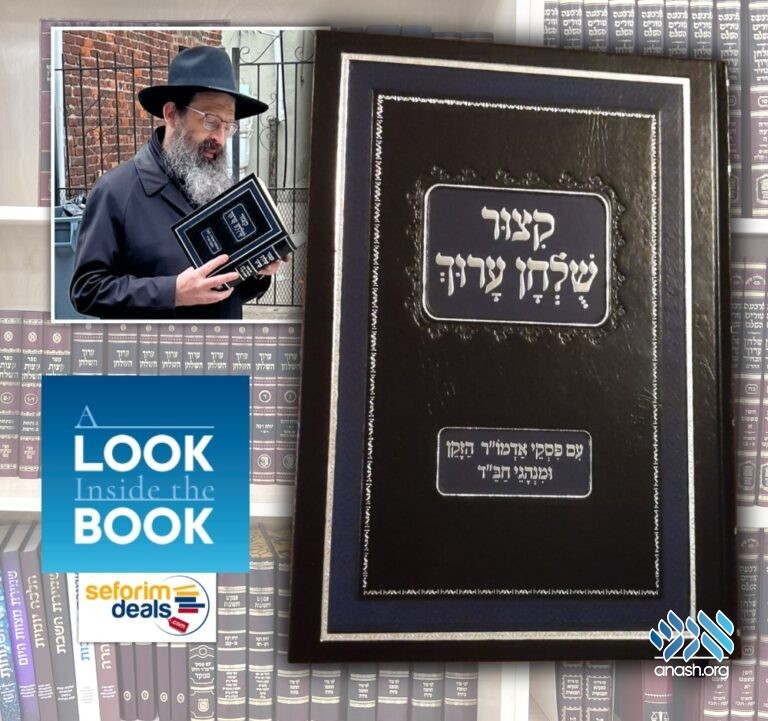 A new edition of Kitzur Shulchan Aruch with the addition of minhagei Chabad brings this classic sefer fully into line with actual Chabad practice, making the already popular sefer even more practical for Lubavitchers.

From the day it was published in 5624, Kitzur Shulchan Aruch has achieved incredible popularity. Written by Harav Shlomo Gantzfried (5564-5646), a Rov in Ungvar, Hungary (now Uzhgorod, Ukraine), the Kitzur has been published in hundreds of editions, translated into many languages, and dozens of commentaries have been written on it.

Fifty years ago, bibliographers estimated that over one million copies of the Kitzur had been published to date. With the Kitzur still as popular as ever, that number has surely since doubled and tripled (see Hamaayan 11:3 for further biographical and bibliographical information).

There is hardly a frum Jew in the world that hasn’t learned from the Kitzur. It is used by schoolchildren—both boys and girls—first beginning to learn halachah, adults looking to quickly review basic halachos, and baalei teshuvah taking their first steps in halachic observance.

The Rebbe often recommended study of Kitzur Shulchan Aruch, to youth and adults alike, as a method of gaining the basic knowledge of halachos hatzerichos for everyday life and reviewing them (see Nitzutzei Rebbe, Hiskashrus 444)

It may not be an exaggeration to state that the Kitzur Shulchan Aruch is the most popular sefer ever written (leaving aside Tanach and works of Chazal that do not have an individual author).

How did this sefer achieve such extraordinary popularity? The basic explanation lies in the author’s ability to summarize all the halachos a regular Jew needs to know concisely enough to fit into a single volume.

Kitzur Shulchan Aruch accompanies a Jew’s daily schedule from waking up in the morning and performing netilas yadayim, through the halachos of tzitzis, tefillin, and davening. It covers the entire Jewish calendar, from hilchos Shabbos to all of the Yamim Tovim, and the everyday halachos of kashrus, berachos, and interpersonal monetary affairs. And it guides the reader through the lifecycle, from bris milah to marriage, and through to aveilus.

The author is able to condense all of this into one volume by focusing on the main practical details the regular layman encounters, and delivering just the bottom halachic line, without exploring reasons and variant opinions.

Yet, the Kitzur is not just a dry technical work. The author has a broad view of halachah, similar to that of the Rambam, which also encompasses matters of midos, ethical conduct, and lashon hara—halachos that the regular Shulchan Aruch omitted.

Within individual simanim as well, the author often includes a brief explanation of the importance of the given topic, words of chizuk and hisorerus (e.g., 1:1-4 and 12:23), and pointed mussar regarding common lapses in halachic observance (see, for example, 6:3 and 10:1).

This flavor of authentic yiras shamayim that suffuses the entire Kitzur may also be one of the reasons for its great success.

The incredible popularity of the Kitzur, and its widespread use as the standard work for studying halachah in schools has resulted in many editions with notes to where other poskim, considered final authorities in various communities, differ from the Kitzur’s ruling. This genre includes editions with the pesakim of the Mishnah Berurah, Harav Ovadiah Yosef, and Harav Mordechai Eliyahu.

In Chabad circles, the final authority in halachah is, of course, the Alter Rebbe’s Shulchan Aruch. While the Kitzur Shulchan Aruch used the Alter Rebbe as one of his three primary sources (alongside the Sidur Derech Chaim and Chayei Adam), his rulings don’t always follow the Alter Rebbe (see R. Gantzfried’s letter, published in Sinai, Nisan 5743, and mentioned by the Rebbe in Toras Menachem 5744:4, p. 2483).

One of the early seforim published as a commentary to the Kitzur—still in R. Gantzfried’s lifetime—was the Misgeres Hashulchan, written by Harav Chaim Yeshayahu Halbesberg, a Chassidishe Rov in Poland. One of the focuses of the Misgeres is highlighting the Alter Rebbe’s opinion when the Kitzur paskened differently.

But since the Misgeres didn’t point out every minor difference between the Kitzur and the Alter Rebbe, and the pesakim of the Alter Rebbe are scattered throughout the much larger sefer, there remained a difficulty for Chabad Chassidim—especially younger students—to learn halachah from the Kitzur while still adhering to the Alter Rebbe’s pesakim.

To fill this need, Harav Levi Bistritzky, the Rov of Tzfas, published the original Kitzur Shulchan Aruch im Piskei Admur Hazaken in 5752. This edition of the Kitzur adds glosses with the pesakim of the Alter Rebbe from his Shulchan Aruch and Siddur when they vary from the text of the Kitzur.

The glosses are added not only when there’s a direct machlokes between the psak of the Kitzur and the Alter Rebbe, but also when the Alter Rebbe adds a qualification or phrases the halachah with different wording that implies minor differences in his understanding of the halachah.

Kitzur Shulchan Aruch im Piskei Admur Hazaken was an instant success, instantly becoming the standard Kitzur used in Chabad schools. In 5766, a new edition was published, with nikud added and abbreviations spelled out, making it more accessible for younger students.

The absence of these minhagim from the original Kitzur with piskei Admur Hazaken meant that despite the significant step forward in making the Kitzur Shulchan Aruch a useful practical guide for Chabad Chassidim, there remained a certain gap that the student had to fill based on his own knowledge of minhagei Chabad.

The best example of this issue is in hilchos mezuzah. As the Alter Rebbe’s Shulchan Aruch and Siddur do not include hilchos Mezuzah, the original Kitzur with piskei Admur Hazaken contains virtually no glosses to the Kitzur’s presentation of these halachos (siman 11).

But minhag Chabad has a major chidush in hilchos mezuzah—using heker tzir, the direction to which the door opens, as the primary factor to determine the right doorpost onto which the mezuzah should be affixed. A student learning from the original Kitzur with piskei Admur Hazaken would not get this information, rendering much of hilchos mezuzah in the Kitzur not practical.

The editor of this edition is Harav Levi Yitzchak Raskin, the Rov of the Chabad community in London, England. R. Raskin is eminently qualified for this role, as the author of a comprehensive commentary to the Alter Rebbe’s Siddur, and a series of practical halachah sefarim, Nesivim Bisdeh Hashlichus.

Rather than weave the minhagim into the text of the Kitzur, these notes appear as footnotes in a separate section at the bottom of the page titled horaos uminhagim. The minhagim included are drawn only from definitive sources, such as the sefarim of the Rebbeim and Sefer Haminhagim. Personal minhagim of the Rebbeim not clearly stated as public directives are omitted.

The introduction to the new edition states that it will only include those minhagim directly relevant to the text of the Kitzur. An examination of the sefer shows that this isn’t strictly adhered to, such as when the segulah of learning shiras Haazinu by heart, and the Rebbe’s instruction to children to learn the yud beis pesukim, is provided when the Kitzur mentions the issue of reciting parts of Torah Shebichsav by heart (1:6). However, since the minhagim are located in a separate section of the page, this will not interfere with the concise study of practical halachah.

Lengthy se’ifim in the Kitzur have been broken down into multiple paragraphs, and the punctuation has been significantly upgraded. These external improvements will be very helpful to younger learners.

Illustrations have been added on the page where this can clarify the halachos. For example, the highly technical discussions of what forms of damage render tzitzis pasul, and which doorways require a mezuzah, become clear as a result of the illustrations provided.

Additional quotes from the Alter Rebbe have been added, and some quotes deemed mistaken or unnecessary have been omitted. The language of the quotes has also been edited to increase the clarity. These changes are usually of minor halachic significance, but they raise the level of accuracy significantly.

Most of the occasional mistakes in the previous edition have been corrected. For example, in siman 129:11 the old edition quoted the Alter Rebbe from Shulchan Aruch concurring with the Kitzur that Avinu Malkeinu chatanu lefanecha is recited on Rosh Hashanah. The new edition corrects this based on the Alter Rebbe’s instruction in the Siddur to omit this passage.

In siman 33:5 the Alter Rebbe’s ruling, contrary to the Kitzur, that in modern times when snakes are not common in residential areas it is no longer necessary to refrain from drinking water left uncovered, is now included.

While both the old and new edition of the Kitzur with piskei Admur Hazaken state that they have used the nusach of the text of the Kitzur of the Frankel edition, the new edition has apparently been proofread and corrected.

The previous edition contained a mistake found in a number of editions of the Kitzur, where a line in 52:9 was skipped, resulting in a mistaken psak about the berachah to be made on a particular food. The new edition reinserts the missing line, correcting the error.

Interestingly, the new edition also makes minor grammatical changes from the original text of the Kitzur, in matters of lashon zachar and lashon nekeivah (see the changes to 9:10, following the lead of the Mosad Harav Kook edition of the Kitzur).

One editorial change from the previous edition regards the citation of psakim from Alter Rebbe’s Shulchan Aruch when the Alter Rebbe later revised his position in the Siddur. The old edition would cite both the Shulchan Aruch and the Siddur, contrary to the Kitzur’s style of only presenting the halachic bottom line. The new edition has changed this, and generally only quotes the Alter Rebbe’s final ruling in the Siddur (see, for example, 102:1, 129:9, and, for an extreme example, 10:4).

One way in which this excellent new edition of the Kitzur could have been further enhanced would be the addition of English translations for some of the less common foods mentioned in hilchos berachos. The mechaber of the original Kitzur saw the need for this and provided Yiddish translations for his audience, and in our time translations to the English vernacular should be added.

It would also have been a good idea to outline in the introduction the methodology used for the collection of the Alter Rebbe’s psakim. The previous R. Bistritzky edition contained such an introduction, but the new edition made some changes to the methodology and omitted this introduction.

The new edition of Kitzur Shulchan Aruch im Piskei Admur Hazaken Uminhagei Chabad is an aesthetically designed and meticulously edited work. The addition of minhagei Chabad now brings this classic sefer fully into line with actual Chabad practice, and schools and individuals that use the Kitzur regularly would be well advised to upgrade to this wonderful new addition.