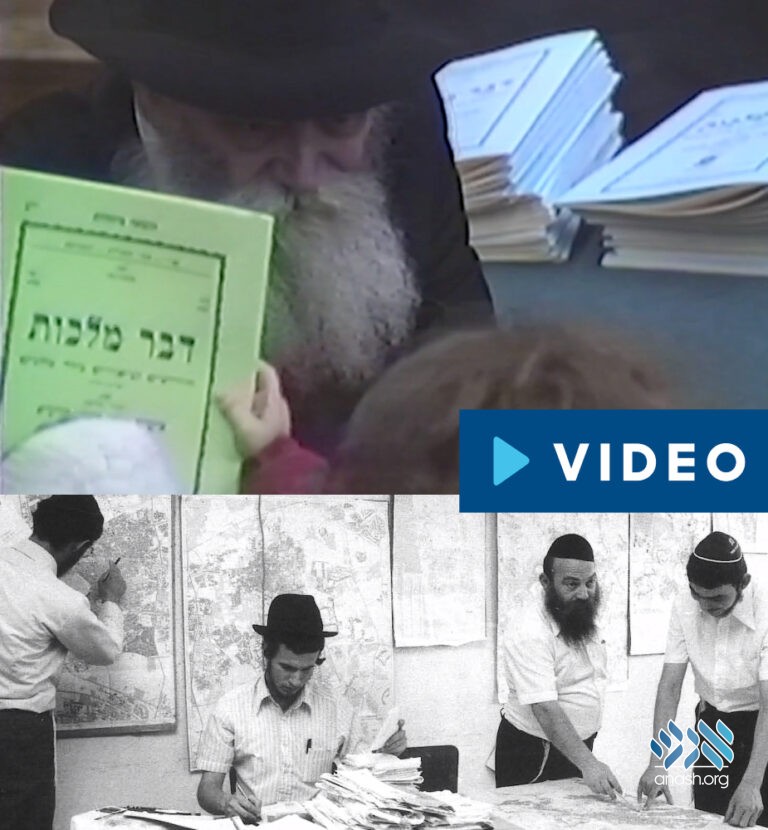 30 years ago on Iyar 15, thousands of Chassidim received a booklet of Sichos called ‘D’var Malchus’ directly from the Rebbe’s holy hand. Discover fascinating and little known details of this event in a new documentary released by Merkos 302.

It was a monumental and historic moment, 30 years ago, as thousands of Chassidim stood in line waiting to receive a booklet of Sichos called ‘D’var Malchus’ directly from the Rebbe’s holy hands.

What exactly is contained within this Koivetz – booklet, and how did this distribution come about?

As part of the project “It’s Time To Know” under the Tut Altz initiative, the Merkos 302 Moshiach Office with valuable footage made available by JEM, are releasing a documentary covering the fascinating and little known details of this event.

The video is narrated by Rabbi Eliezer Zaklikovsky, shliach in Monroe, New Jersey, who was a bochur in 770 during that time.

One of the highlights and most powerful moments is his description about the impact this had on himself and fellow Chassidim to live with Moshiach in a completely new way.

The presentation begins with the build up to the Rebbe giving it out, the feelings and reactions during the distribution and the period following it.

“In just a few days, on 15 Iyar, we will be marking 30 years to the day from when the Rebbe gave out the Dvar Malchus, it’s an appropriate moment to recommit ourselves as a united family of Chassidim to heed the Rebbe’s call to learn about Moshiach,” said Mendel Ehrenreich of the Moshiach Office. “Perhaps take the Dvar Malchus YOU received from the Rebbe and learn it with family or a friend”!

The four Sichos included within the booklet discuss the final chapters of Rambam which cover the topic of Moshiach. This year the Siyum HaRambam will be on Gimmel Tammuz itself and therefore it is most fitting that these Sichos are learned, relearned and committed to memory.

To date, thousands of individuals have signed up and committed to joining this learning initiative along with hundreds of schools worldwide and tens of communities as well.

Join anash worldwide in learning all or part of these sichos, with six unique tracks geared for men, women and children, materials in five languages, in this unprecedented unified learning initiative.

For info on how your community, school or Yeshiva can join, email info@tutaltz.com