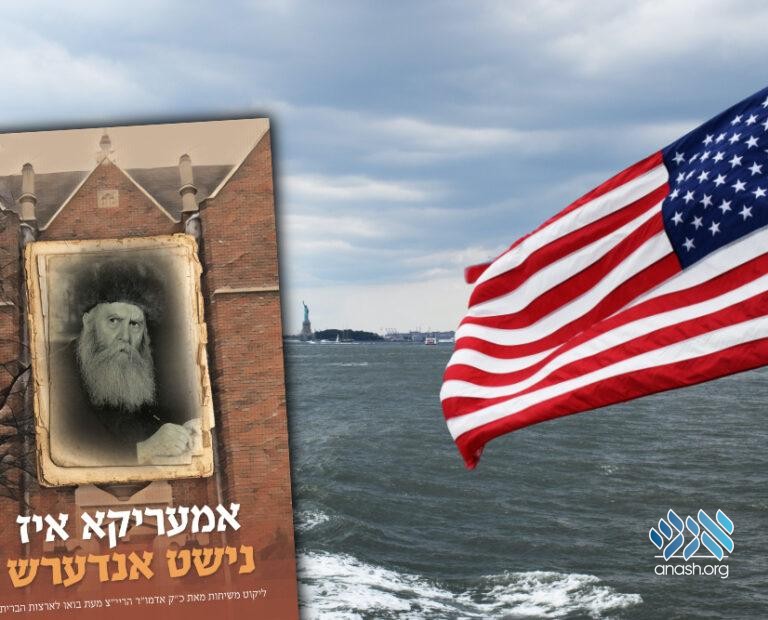 A new publication, released in time for the 81st anniversary of the Frierdiker Rebbe’s arrival in America, takes a fresh look at the struggle to implant authentic chassidishe values in the land of opportunity – the United States of America.

A new publication, released in time for the 81st anniversary of the Frierdiker Rebbe’s arrival in America, takes a fresh look at the struggle to implant authentic chassidishe values in the land of opportunity – the United States of America.

Eight decades ago, when the Frierdiker Rebbe arrived in the USA, Yiddishkeit around the world was facing hardships unlike any it encountered in centuries. In Europe, the fire of the Holocaust was decimating generations of tradition dating back thousands of years. Across the ocean, Yidden were free of persecution, but the prevailing attitude was of apathy and coldness towards Yiddishkeit.

It was to this scene that the Frierdiker Rebbe arrived in 5700 after escaping Nazi-occupied Poland. The local Jewish communities greeted him warmly, but the expectation was that the “old-fashioned” and “archaic” way of European Yiddishkeit would be discarded as part of the assimilation into the American culture.

But the Frierdiker Rebbe had a different point of view. Immediately upon arriving he declared “America iz nisht andersh” – America is no different! He then immediately set out to lay the foundations for the transfer of pure Chabad ideals and conduct to “the land of the free.”

Over the next ten years, until his passing in 5710, the Frierdiker Rebbe endeavored to continue that mission, to pass down the flame of unadulterated Chabad Chassidus to the next generation of chassidim. In his trademark fashion, the Frierdiker Rebbe in his Sichos vividly described the previous generations of chassidim and their way of life, painting a picture of genuine devotion to Yiddishkeit and Chassidus.

Today, eight decades later, as yeshivos across America are filled to the brim, chadorim educate tens of thousands of children a year, and thousands of shluchim reach out to their brethren to bring them back to Yiddishkeit, one can confidently say that the Frierdiker Rebbe won the battle for the soul of American Jews.

Chinuch, farbrengens, Torah study, Rebbe and chossid and kabalos ol are just some of the topics covered in the new book. In each, the Frierdiker Rebbe teaches and explains, shining a light on the subject from the teachings of predecessors and lives of their chassidim, passing the torch on to the American chassidim who would become the base of Lubavitch.

Aptly named “America Iz Nisht Andersh”, the new book will give readers an appreciation for the depth that can be found is so many of the ideas and concepts we come across on a daily basis. A nigun will be a different nigun, a davening will be a different davening, and even the way we approach society will be changed beyond recognition.

Published just days ahead of the 81st anniversary of the Frierdiker Rebbe’s arrival on Tes Adar, the book will undoubtedly rouse the reader to continue the struggle against the modern-day American assimilation – the feeling of indifference and apathy to the warmth of Torah and Chabad Chassidus.

The book “America Iz Nisht Andersh” is available on SeforimDeals.com, and is available for purchase in all Crown Heights stores.