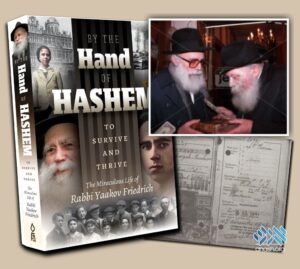 ‘By the Hand of Hashem’, a new book by Rabbi Yaakov Friedrich, one of the elders of the Chabad community in Antwerp, tells the story of his survival from the Nazis while hiding in plain sight, and his subsequent connection with the Rebbe.

‘By the Hand of Hashem’ is available for purchase at Seforimdeals.com. Free shipping, or free delivery in Crown Heights, with code ‘Anash’.

‘By the Hand of Hashem’, a new book published by Feldheim Publishers, tells the story of elderly Chabad chossid Rabbi Yaakov Friedrich, in his own words, describing his youth, his miraculous survival of the Holocaust and his subsequent years in Antwerp.

Reb Yaakov’s life story is an intriguing one, even before the tumultuous years of World War II. His childhood was far from typical, with his father abandoning Yiddishkeit shortly before he was born, and then abandoning his wife and children a few short years later.

Through a series of events that can only be described as clear hashgacha protis, Reb Yaakov ended up being adopted by a frum family in Antwerp, instead of remaining by the Catholic family where his father had left him.

He quickly grew into a budding talmid chochom, only to be forced to become an apprentice to a goldsmith by the Jewish community council who would no longer fund his yeshiva studies.

As his life slowly began to settle, the winds of World War II began to blow. After his attempt to escape from Belgium failed, Yaakov found himself back in Nazi occupied Antwerp, and witnessed the beginnings of the deportation and extermination of Dutch Jewry.

Yet, as the majority of the community followed the Nazi’s instructions, ultimately leading to their murder, Yaakov ran his own system. Having heard of the horrors perpetrated on Polish Jewry from the Nazis themselves, he did not follow any instructions given by the occupiers or the Judenrat, thereby allowing himself to remain hiding in plain sight as thousands of others were rounded up.

The author continues to relate the series of miracles that allowed Reb Yaakov to survive the years of horror, and live with new wife in the center of the city as the Nazis attempted to make the country Judenrein.

The book gives a glance into the vibrant pre-war Jewish community of Antwerp, describing many of the personalities and institutions, and of the Holocaust in Belgium, a country that, for the most part, resisted the Nazi’s wicked plans, allowing 40% of the country’s Jewish population to go into hiding.

Rabbi Friedrich then goes on to describe his subsequent years in Antwerp, where he lives to this day. Never being satisfied with simply resting, he established numerous mosdos and shiurim over the years, helping rebuild the community devastated by the Germans.

Today, Rabbi Friedrich is one of the respected and elderly Chabad chassidim in Antwerp. The book relates some of the stories and encounters he had with the Frierdiker Rebbe and Rebbe, including a miracle he experienced with the Rebbe after a doctor gave him the wrong medicine.

All in all, the book is an enjoyable read, both covering intriguing topics and written in an easy style, allowing one to finish the entire book in one sitting, if he so desires. With the entire world undergoing challenges that haven’t been seen in decades, the book is a refreshing story of emunah and hashgacha protis, an inspiring memoir of a chossid who saw the ‘Hand of Hashem’ even in the harshest of times.

‘By the Hand of Hashem’ is available for purchase at Seforimdeals.com. Free shipping, or free delivery in Crown Heights, with code ‘Anash’.