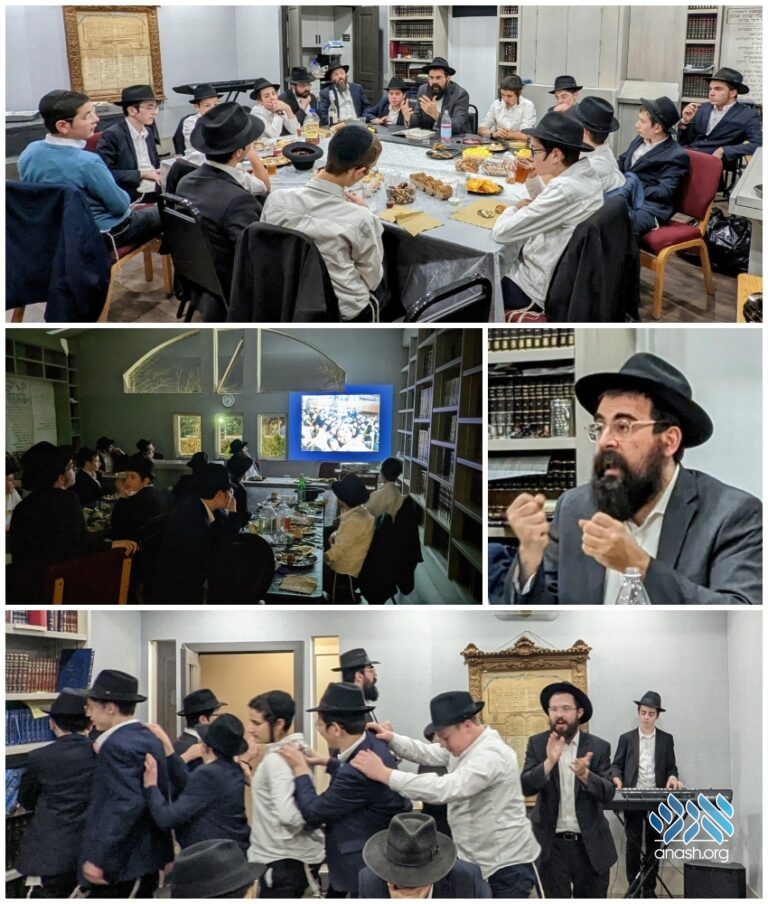 The Talmidim of the new Mesivta Lubavitch Baltimore spent the days of Rosh Chodesh Kislev with inspiring farbrengens, meaningful Hachlotos, and a grand seudas hoda’ah.

Leading up to Rosh Chodesh Kislev the Talmidei Hashluchim printed special booklets going through the entire story leading up to the Rebbe’s heart attack and the chain of events that followed in 5738. The Talmidim who studied it thoroughly and took a quiz on the material were awarded with a lavish breakfast.

On Thursday night Rosh Chodesh Kislev, the bochurim and Hanhalah gathered for a grand Seudas Hoda’ah celebrating this special day when the Rebbe left 770 for his home for the first time since the heart attack.

As the Talmidim entered, they were greeted with live niggunim being played by fellow Talmid Sholom Osdoba, as they sat down to a catered festive seudah.

The Talmidim were addressed by the Yeshiva’s Menahel Rabbi Mendy Kaminker, and Mashpia Rabbi Aaron Goldberg, and a special video was played showing clips of the Rebbe and glimpses into the scenes that took place during the first Rosh Chodesh Kislev, concluding with an address by the famed Dr. Ira Weiss.

Towards the end of the seudah, the crowd broke out into a joyous dance, celebrating the Yom Tov of Rosh Chodesh Kislev.

After the Seudah, the Bochurim farbrenged late into the night with Rabbi Sender Geisinsky, shliach to Bethesda, MD, who spoke at great length about the special day and what it means to us today. He also encouraged everyone to take upon themselves Hachlotos Toivos.

The Yeshiva would like to thank the Talmidei HaShluchim and eltere Bochurim of the mesivta for arranging the event, and ensuring this day is celebrated with a shturem!