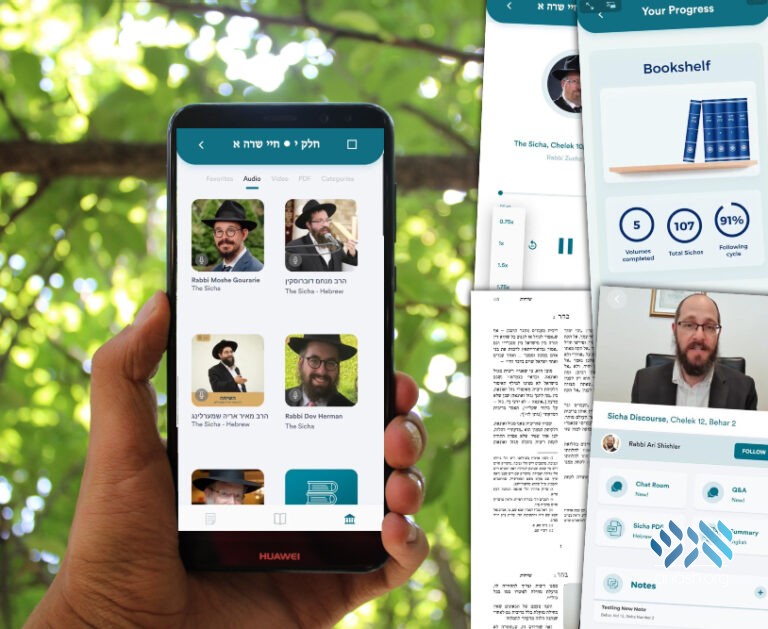 Likkutei Sichos is heading to your smartphone. The plethora of resources compiled by Project Likkutei Sichos is being packaged into a user-friendly, crystal-clear, tasteful app. The Beta version is set to be released on Yud Shvat.

Project Likkutei Sichos began one year ago with the ambitious goal of opening up the Rebbe’s sichos to every Jew.

To that end, they enlisted dozens of accomplished scholars, men and women, to build a comprehensive library of study aids on each sicha in Likkutei Sichos. Audio and video presentations in five languages, translations, flow charts, and countless other materials are geared towards every level of sophistication—from advanced students of the Rebbe’s Torah, to the uninitiated neophyte, to children.

It began with the modest goal of recruiting seventy sign-ups. Today, by the end of every week, about 10,000 people have studied two sichos in some form and fashion.

According to Rabbi Shmuli Nachlas, a Shliach in Toronto and part of the team behind Project Likkutei Sichos, the new app is “Uber for Likkutei Sichos.”

“We’re really just facilitators, we want to provide as many different avenues and opportunities for people to learn the sichos,” he said. “The desire of the chassid to learn has always been there. Project Likkutei Sichos enables the masses to finally act on that desire. Just like Uber.”

The app is aimed at closing the gap between good intentions and action by offering portability.

“Fact is, everyone is on their phone, everyone is mobile. A lot of people find it hard to carve out time to sit and learn a sicha,” Rabbi Moshe Gourarie of Project Likkutei Sichos observed, “the app removes that impediment.”

The driving vision behind every feature of the app is to make the sicha as easy as possible to study. The landing page is customizable; you select your preferred lecturers and they will be displayed on your home page. If you need to stop in the middle of a lesson, the app saves your progress and picks up where you left off. The video can be minimized so you can follow along in the PDF of the sicha, or in the slideshow or flowchart based on the sicha.

A clever “Library” graphic tracks your progress as you complete each sicha and eventually, each volume of Likkutei Sichos.

Menachem Frank, co-owner of BerryTech, the software development firm that produced the app, was particularly proud of the ‘notes’ feature.

“With the notes, you have the ability to catalog your thoughts as you learn in the app and link it to a specific passage in the sicha,” he said. “So if you ever visit that sicha again, your notes will be there to look back at or to aid you in future learning.”

What stood out to Rabbi Levi Jacobson, a Shliach in Toronto who was one of fifteen preliminary testers of the app, was the smoothness of the user experience. “The team has clearly invested a lot into making a highly usable app. The features are clean and intuitive to use. It really is a huge stride in making the sichos accessible to anyone with a smartphone.”

Yosef Mintz, the lead developer of the app, is pleased with his teams’ work, but stresses that the app is in its Beta version, and it will continuously be updated and upgraded.

Amongst the planned future improvements are a hyper-linked sicha text, where clicking on a citation in a note opens the full source, a side-by-side English/Hebrew translation, and live in-app classes.

The timing of the release coincides with the completion of volume 10 of Likkutei Sichos, the fifth volume to be completed, and the launch of the “Project Likkutei Sichos Campaign Day” on January 3rd, aimed to raise critical funds to continue and expand PLS’s growth.

With the new app, the world of Likkutei Sichos is a tap away.