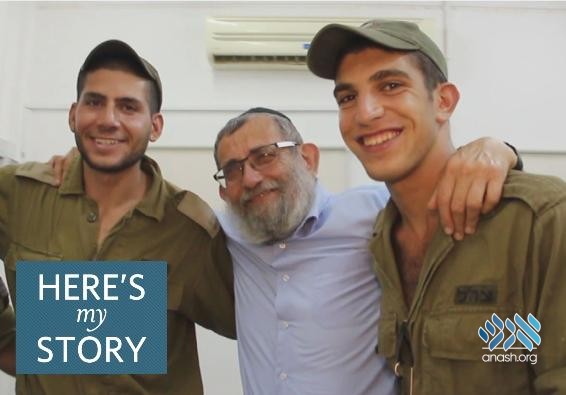 Rabbi Yaakov Spitezki, shliach to Brussels, was waiting outside the Rebbe’s room to receive a blessing for a safe trip home, but the Rebbe did not say anything. Later, the Rebbe’s secretary explained why.

For thirty years, Rabbi Yaakov Spitezki served as a Chabad emissary in Brussels. Presently he resides in Jerusalem with his wife Chaya, a high school teacher. They are both actively engaged in outreach on university campuses and IDF bases. He was interviewed in November of 2015.

When I graduated high school, my parents gave me a present — a ticket to fly from Paris to New York, where I could visit with the Rebbe. Although my parents were religious, they were not chasidic, but I had been connected to Chabad since my early teens and they knew this present would make me very happy.

I remember that, upon entering the Rebbe’s room, I felt very cold because the air conditioning was on high, but as soon as the Rebbe looked at me with his bright blue eyes, I warmed up. He spoke to me softly, in French, and he put me totally at ease. I felt calm and serene — as if I was meeting with a loving father.

During the audience — which took place in July of 1968 — the Rebbe asked me many personal questions. He also answered questions I asked him, both my own and those that my friends from high school wanted me to ask. In particular, their questions concerned issues of faith. For instance, they wanted to be reassured that the Torah is the word of G -d and that it was given to the Jewish people on Mount Sinai — that these things really happened.

“You can tell your friends,” the Rebbe said, “that just as we know and accept as historical fact that Columbus discovered America, we also know that there was a revelation from G-d at Mount Sinai.”

Then he recommended that we study the Kuzari, the 12th century work by Yehudah HaLevi, in which a rabbi explains Judaism to the king of the Khazars. “Try to read it in Hebrew, but if that’s too complicated for you, then go to the Bibliothèque Nationale in Paris where you’ll be able to find a French translation.” When I returned to Paris, I told my friends about what the Rebbe said and they were satisfied with his answer.

All this had an impact on my decision to enroll in the Chabad yeshivah in Israel, headed by Rabbi Schneur Zalman Gafne. But after a while, my parents became concerned that I was not acquiring a college education which would allow me to earn a living. They knew that the Rebbe had told one of my friends to return to college, so they decided to visit him in New York and discuss the issue with him personally.

My mother later described to me everything that had happened during that audience. My parents told the Rebbe that I was doing well in yeshivah, but enough is enough: “We want him to come back to Paris and enroll in college.” The Rebbe responded, “I know what college is all about, because I went to college myself. I can tell you this: You will have more satisfaction from him if you leave him in yeshivah for a longer period.”

The Rebbe also brought up some problems that I might face at university, in particular mentioning the violence of May 1968, when French students attempted to foment a revolution. My parents were persuaded by what the Rebbe said, and they allowed me to continue in yeshivah.

Before I left for Belgium, the Rebbe counselled me: “Rabbi Azriel Chaikin arrived in Brussels before you, and he knows a lot of people. He will help you and give you good advice.” As it turned out, I worked in close cooperation with Rabbi Chaikin all the years that I served as an emissary in Belgium. During that t time, I established a Chabad House just in front of the Brussels University campus, which was a big success largely thanks to the efforts of my late wife, Eta Feiga, who was a gifted speaker and a stellar example to our many students.

On a number of occasions, the Rebbe gave me specific and confidential directions regarding particular community matters, as well as good advice regarding my personal spiritual growth. For instance, he advised me to use Thursday night to take stock of the past week, to engage in deep self-examination — what is called cheshbon hanefesh (literally, “an accounting of the soul”).

Another time, at the end of a trip to New York for the holidays, I was about to return to France and was waiting to say good-bye to the Rebbe as he left the synagogue after afternoon prayers. Others were also waiting, and the Rebbe blessed each of them to have a safe trip, but to me he didn’t say anything. Afterwards, Rabbi Leibel Groner, his secretary, enlightened me. He said, “Yaakov, the Rebbe asked me to tell you that because earlier this morning he gave you a blessing to return safely to Paris, he did not give you another blessing just now. Rabbi Yehudah HaChassid famously said that one should not say good-bye twice.”

The Rebbe sent that message via Rabbi Groner because he wanted to make sure that I wasn’t hurt — that I understood there was a good reason why he didn’t wish me a good trip like all the other visitors. Despite all that was on his mind, the Rebbe took pains to ensure I didn’t feel bad. That’s how much he cared.

These are the encounters that I remember most vividly. I was privileged to experience the Rebbe’s greatness personally in the many ways he advised me on the road through life. He always had a reason for everything and, although he could be exacting, he was driven by one thing above all — the love of every Jew.