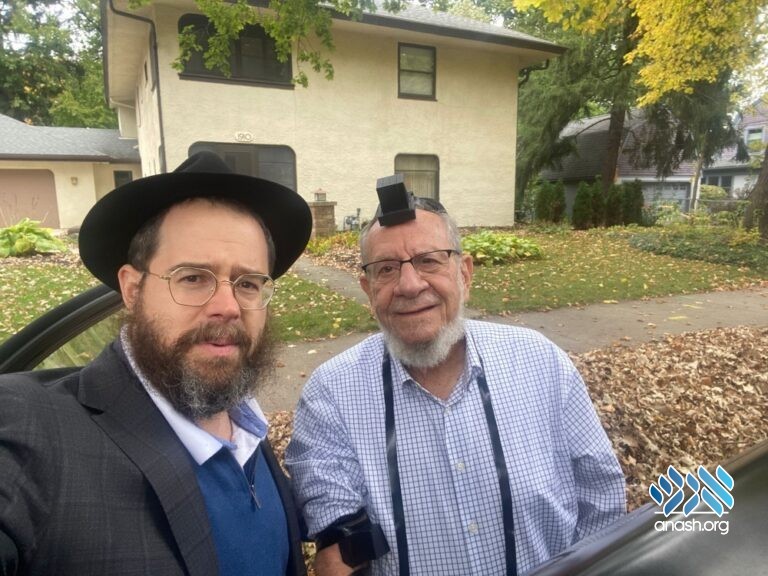 My sister Mushkie and her husband Avremel Matusof serve as the Rebbe’s emissaries in Madison Wisconsin.

They were blessed with a (premature) baby boy a few weeks ago, and finally, the baby came home and had a beautiful Bris yesterday.

Eager to be part of this miracle and great simcha, I arrived at LGA at 7 AM yesterday.

I greeted the nice couple behind me at the security check and continued on my way. Around 20 minutes later, I spotted the couple again— sitting on the next row in the gate lounge.

At 8:30 it was time to board, and once more I nodded greetings to the couple who are now seated two rows behind me. Seeking more space to possibly rest, I moved to an empty row right across the aisle from this same lovely couple.

I said hello and as we got talking, it turns out that they’re a Jewish couple who moved to Madison 12 years ago. Steve described growing up in the lower East Side 81 years ago which of course was fascinating to me.

As we were chatting, I asked Steve if he had wrapped Teffilin to which he responded: ‘I have never laid Teffilin in my life! When I was bar mitzvah, that wasn’t the custom at the local temple.’ Of course, being a Chabad shliach, I ask him to give me a minute while we would put on Tefillin and say the shema.

Steve respectfully declined. I tried to be more persuasive—to no avail. Eventually (maybe to get me off his back), he says: ‘I guarantee you that within one week I will send you a picture of me wrapping with one of my friends at the temple.’

The plane arrived to Wisconsin and as we were walking through the airport and passed a quiet area, I decided to try one last time but disappointingly, the answer was still a no.

As we made our way downstairs and said goodbye, Steve and Bobbie headed to luggage claim and I went outside to call an Uber.

As I was waiting for the car, I heard somebody call my name. I turned around and there was Steve and Bobbie offering me a ride.

It turns out that their daughter had come to pick them up and they had been unsure as to whether or not she would bring her dog along but since she hadn’t , there was now space for me. ‘We’d love to take you to your sister’s home.’

As I climbed in to the car, they asked me if I’d mind detouring a little as they showed me around the beautiful lakes and the state capital.

Suddenly, Steve turns to me and asks to wrap Teffilin!

So in the middle of Madison Wisconsin in the 48° weather, Steve wrapped Teffilin for the first time in 81 years!

Bonus side note: I had the enormous honor of being sandek for the Bris!