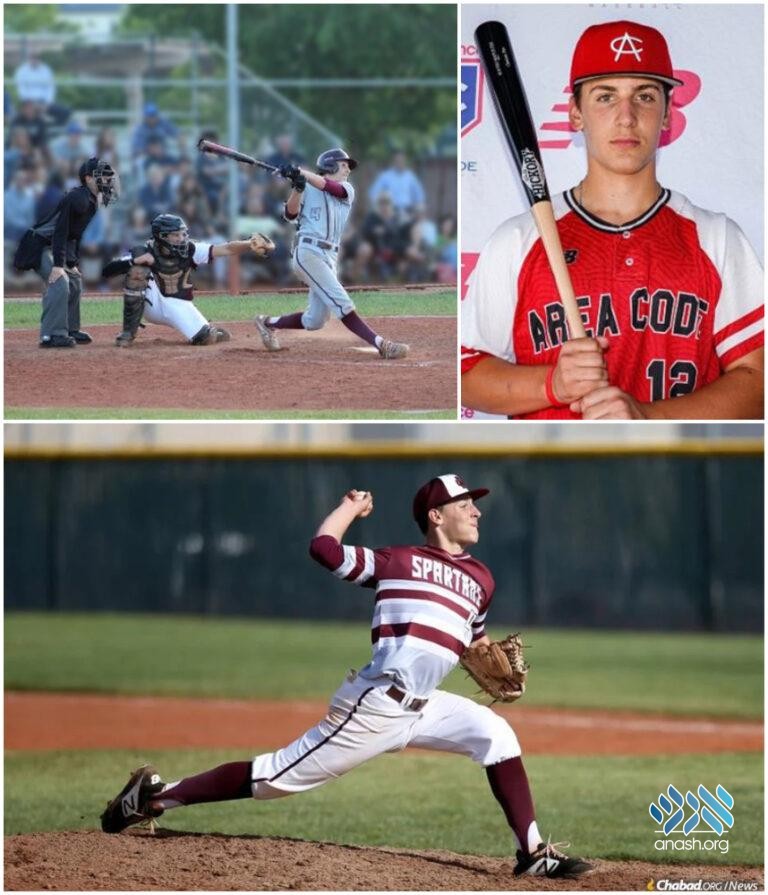 Elie Kligman, a high school senior from Las Vegas, hopes to play baseball professionally one day. But he never comprises on his Yiddishkeit, and he says shluchim in Nevada and Arizona help him stay strong.

For decades, Jewish baseball fans have looked to Sandy Koufax as a role model for refusing to pitch in game one of the 1965 World Series because it fell on Yom Kippur. While that stood out as an example for Jews everywhere, one Nevada teen is hoping to take it a step further and become the first Shabbos-observant, kosher-food-eating professional baseball player.

“My dream has always been to be a Major Leaguer. I never thought of anything else—baseball has always been what I’ve wanted to do,” says Elie Kligman, a high school senior from Las Vegas who plays as both an infielder and pitcher.

The 18-year-old has been playing ball his entire life. After years of competing at all levels, Elie, who is on his high school team and one of the top-ranked players in Nevada, was one of only 175 high-schoolers from across the country—and the first Orthodox Jew—to take part in the Major League Baseball-scouted “Area Code Baseball Games.”

He does all this without compromising his Judaism. Elie has never played on Shabbos, makes time to pray three times a day and keeps the Jewish dietary laws of kashrut.

In fact, he adds, people are actually interested in what he eats and what he does on Shabbos.

Guiding him in his life and career has been his father, Marc Kligman, an attorney and professional sports agent who has coached Elie and younger brother Ari in the finer points of baseball over the years. He has also worked hard to provide his boys with opportunities to compete at a high level.

“We’ve had a lot of help along the way,” he says. “People have been kind and helpful. Our head coach at the high school makes sure we don’t schedule any games on Saturday.”

But there have been plenty of times that the Kligman boys have had to sprint out of the house right after Shabbos ended to make a Saturday-night game, as well as “plenty of Shabbosim alone in a hotel so we could be local” for a game, say their dad.

The Kligmans, including mom Laura and Elie’s twin sister, Tova, are members of Chabad of Summerlin, a suburb of Las Vegas. Their involvement with Chabad has made things easier over the years, as wherever they find themselves traveling to for a ball game, they make sure to visit the local Chabad House, where they can find kosher food or catch a prayer service.

“It’s a taste of home,” says Kligman. While Elie notes that other Chabad Houses have all been “awesome, especially the Chabad of Phoenix, we know a lot of the community because we go there a lot” for tournaments.

According to Rabbi Shea Harlig, director of Chabad of Southern Nevada, “It’s wonderful to watch Elie balance his commitment to a Torah-observant lifestyle and baseball at the same time, but when there is a conflict, his Yiddishkeit takes precedence.”

In fact, Elie and Ari both make time to study Torah, learning with Rabbi Chaim Ozer Metal, the youth director at Chabad of Summerlin, who says the family’s love of Judaism has even impacted others.

“Because of Elie and his family’s strong sense of Judaism, even when being out there playing baseball, they once encouraged a family to meet with me, which together resulted in the family putting mezuzot on their doors and enrolling their children in Hebrew school,” relates the rabbi.

For now, Elie is waiting to hear where he’ll be going to college, and if he will break new ground as the first Orthodox Jewish baseball player at a Division 1 school. (There have been several Orthodox teens who have played Division 1 basketball, starting with Maryland native Tamir Goodman in 2000.) If Elie does get recruited to a Division 1 school, then he’ll be ranked as one of the country’s best college baseball players, moving him one step closer to his dream of playing in the Major Leagues.

One thing that won’t change, though, is his Judaism.

“People always ask me what I’m going to do in college,” says Elie. “The answer has always been I’m not playing on Shabbos. It’s for G‑d, and I’m not changing that.”