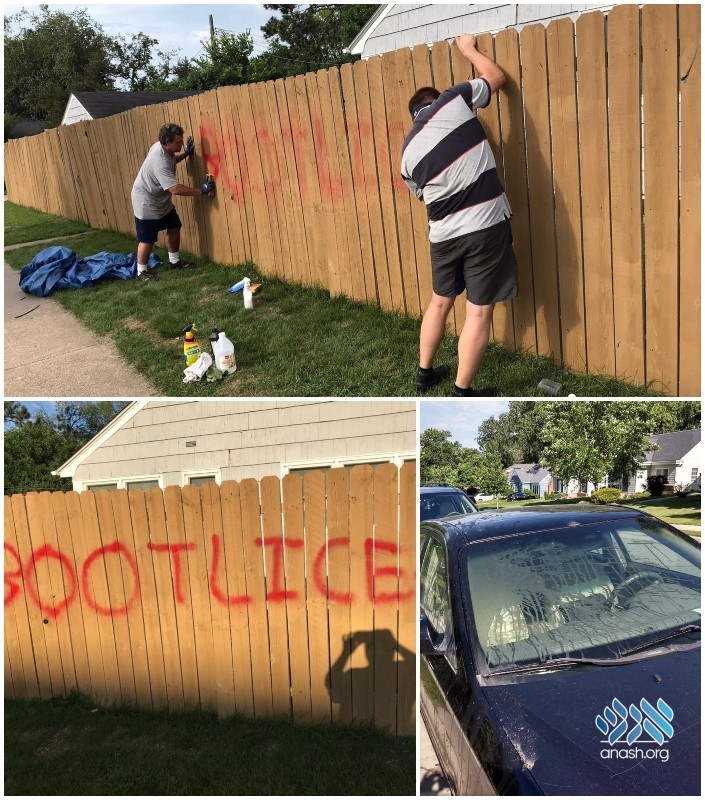 After vandals sprayed graffiti on the home and car of Rabbi Mayer Rubenfeld, Minnesota shliach and chaplain in the S. Paul Police Department, neighbors rallied to clean the paint and repair the damage.

A Minnesota shliach was touched by his neighbor’s response to vandalism to his home and car.

Rabbi Mayer Rubenfeld, shliach and chaplain to the S. Paul, MN Police Department woke up one morning this week to a shocking site. Vandals, noticing that his car displayed symbols marking him as a chaplain, sprayed graffiti on the gate around his house, vandalized an American flag, and dumped repulsive liquid on his car.

With the anti-police sentiments sweeping Minnesota and the country, unfortunately the vandalism did not come as a shock. What did move the shliach was the response of the neighbors.

“I was unable to clean up the mess, due to a foot injury,” Rabbi Rubinfeld told Anash.org. “But almost immediately, neighbors showed up and began cleaning up.”

Locals brought hoses, special graffiti removal spray and other cleaning materials. Before long, the house and the car were back to normal.

“The people who showed up were from all ends of the political spectrum,” Rabbi Rubenfeld said. “Neighbors with had all sorts of lawn signs came and expressed their dismay at the vandalism.”

“It was touching to see that despite all the buzz, decency is still stronger in this country,” he said.