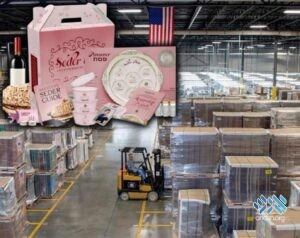 After a freak winter storm damaged Texas plants, the ensuing national glue shortage almost had thousands of seder-to-go kits canceled. But a philanthropic New Jersey company stepped up to fill the urgent void.

In a year of a global pandemic, you might think that an unexpected national glue shortage would not be that big of a deal—after all, the year has seen a range of odd shortages. But for 20,000 Jewish families isolated in their homes for Passover, it could have spelled the difference between having what they needed for a Seder or not.

Glue is among the raw materials needed for packaging boxes. With the approach of Passover, Chabad-Lubavitch emissaries around the world were preparing hundreds of thousands of Seder-to-Go kits so members of their communities would have everything they needed to celebrate the Passover Seder. As part of that effort, Chabad’s Merkos 302 office in Brooklyn had ordered 20,000 boxes from a New Jersey-area supplier. The glue shortage placed the entire order in peril.

The problem started back in February when a freak winter storm in Texas caused manufacturing plants to shut down temporarily.

“The additives used to make the adhesives and plastics come out of two or three plants in Texas, and when they had the freeze, pipes at the plants burst,” causing major damage, said Lisa Hirsh, president of Accurate Box, a N.J.-based, family-owned packaging manufacturer.

Because the adhesive is critical in the creation of Accurate Box’s materials, its sudden shortage meant that the company had to prioritize its clients and their needs based on what was available.

“Given the conditions, Accurate Box had every reason to say, ‘I’m sorry, we can’t come through for you,’ and chances are with other companies that would have been what happened,” said Rabbi Zalman Grossbaum, co-director with his wife, Toba, of Friendship Circle in Livingston, N.J., who helped make the introductions between the company and Merkos 302. “But here is a family, the Hirshes, who not only produce boxes but care passionately about the Jewish community, enough to not only give philanthropically but to act philanthropically.”

Accurate Box was founded by Lisa Hirsh’s grandfather, Henry, in Newark, N.J., in 1944. The Hirsh family are longtime supporters of the Chabad-affiliated Friendship Circle in Livingston, and so when Friendship Circle wanted to create a Shabbat Box with candles, kiddush cups and more for individuals who were in a local hospital over Shabbat, they turned to Accurate Box for help.

Having seen the Shabbat Box kits, staffers from Merkos 302, which provides centralized services for Chabad centers worldwide, knew they needed something similar to house the Seder-to-Go packages they wanted to provide to Chabad emissaries to help streamline the process. The holiday packages were to be filled with everything necessary to conduct an at-home seder, including all the items that go on the seder plate, shmurah matzah, a Haggadah, a guide for leading the seder, and more.

But for that to happen, they would need sturdy, well-designed boxes, as well as individual containers for all the items. Chani Goldberg, who directs Chabad on Call, a project of Merkos 302, and who helped create the Seder-to-Go packages, reached out to Friendship Circle for help and was put in touch with Accurate Box.

“We did this last year with a different company, but it was at the beginning of quarantine, and our orders were either canceled or didn’t get delivered,” she said. While the orders eventually did get delivered and sent out to the Chabad centers, they decided this year to go local. They had high hopes for working with Accurate Box, though didn’t know that the company was facing its own challenges at the time.

‘It Was a Mitzvah’

According to Samara Ronkowitz, Accurate Box’s director of sales and marketing, and Hirsh’s daughter, the request for 20,000 Seder-to-Go boxes came at a “crazy” time due to the whole glue shortage. “However, we knew Passover was coming, and that these boxes would need to be out by a certain date. It was time-sensitive,” she said.

Not only did Accurate Box agree to make tens of thousands of Seder-to-Go boxes, it made them a priority, even rescheduling some of the company’s main clients to do so. “We were telling some of our biggest contract companies that we wouldn’t get to them right away,” recalled Hirsh.

“Everyone internally knew that this account [Chabad] needed to be protected because of the holiday,” added Ronkowitz. “We were happy and honored to be able to contribute and produce the boxes that would help so many people.”

Goldberg said the company was very responsive and constantly updating her—so much so that even though some Chabad emissaries were getting concerned as Passover was nearing and the boxes would need to be shipped from the East Coast across the country, Goldberg herself was not.

Initially, she wasn’t even aware that there was what amounted to a huge issue with getting the boxes delivered. “One of the employees called me and told me, we have a little hiccup, but I’m going into a meeting to work it out.”

“I was very thankful, but I did know they were a Jewish-owned company and that they took pride in creating the Shabbat Kit, so I guess I wasn’t surprised,” she continued. “I was just happy they were working with us.”

For their part, everyone at Accurate Box was glad to help.

“It was a mitzvah,” said Hirsch. “It feels more valuable when you realize that something you are producing is so helpful to others. It’s different than just a box … .”