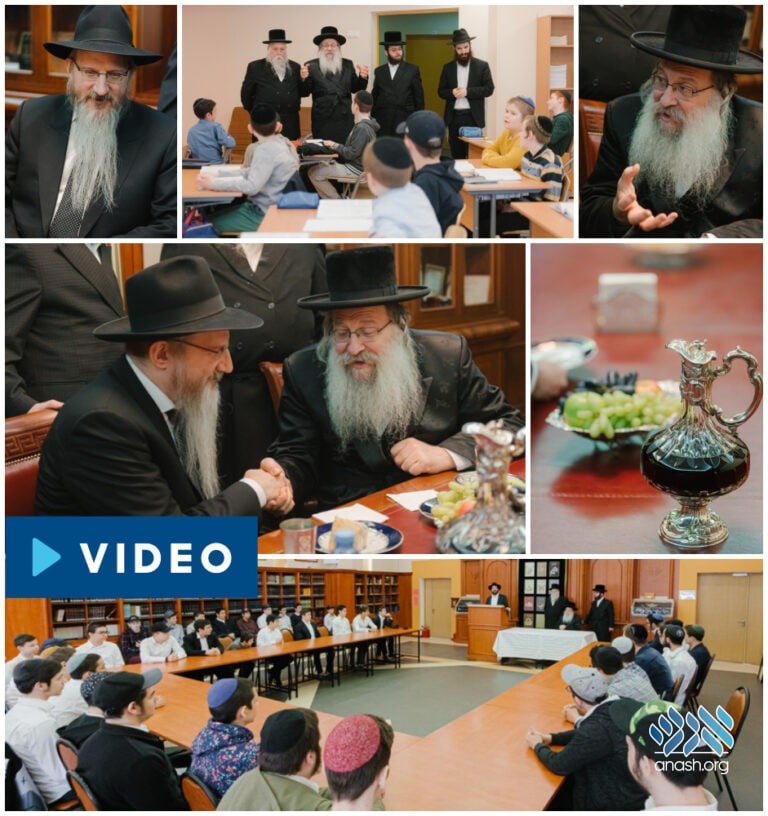 On a quick visit to Moscow, the Nadvorna Rebbe meet with Russia’s Chief Rabbi Berel Lazar and toured the local institutions, expressing his amazement at the empire of chessed and chinuch.

The Jewish community of Moscow was hosted the Nadvorna Rebbe, during which he met with Chief Rabbi of Russia Berel Lazar in his offices at the Jewish Community Center in the famous Marina Roscha district of Moscow.

The two personalities had a lengthy conversation in Torah and Chassidus, during which the guest reminisced about his “Yechidus” with the Rebbe together with his father, the “Be’er Yaakov”.

The Admor praised the revival of Yiddishkeit in Russia, and the multifaceted activities of his host. After saying “lechaim” together, they wished each other continued success in spreading the wellsprings and bringing the redemption.

The esteemed guest continued on to visit some of the educational institutions that were established by the Chief Rabbi.  In the “Mesivta”, he gave an uplifting talk to the students, which was translated by Rabbi Efraim Bloy of the Mesivta’s leadership.  At the “Cheder Menachem” Talmud Torah, he was accompanied by the principal Rabbi Avraham Gewirtz, where he warmly spoke to the hundreds of excited students.

An additional stop was at the “Shaarey Tzedek Chesed Center” where he got a close-up glimpse of how hundreds and thousands of Moscow’s Jews receive assistance, financial aid, and a listening ear to any of their problems by the many dedicated workers and volunteers.

The Admor davened at the central “Marina Roscha” shul, as well as in the “Bolshaya Bronaya” shul, where he met with the “Tzadik of Leningrad”, Rabbi Yitzchak Kogan, who also gave him an historic overview of the place, and of Russian Jewry in general.