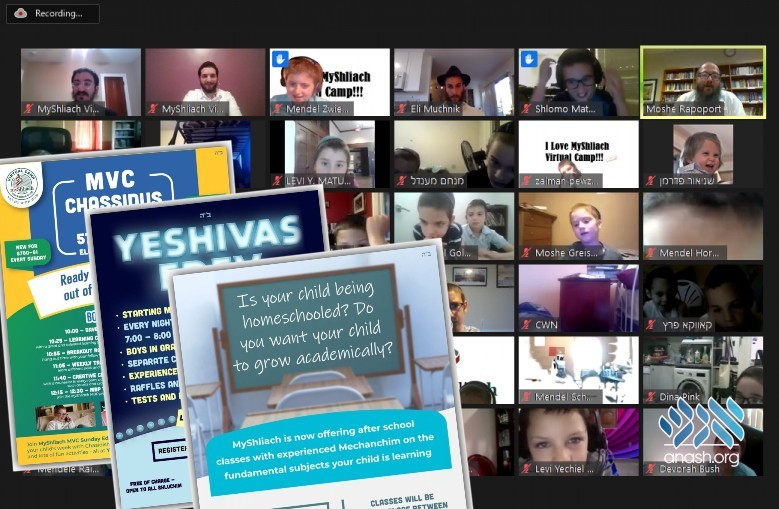 With much of society adapting to virtual programming, MyShliach announced the launch of daily extracurricular classes, nightly Yeshivas Erev and much more.

MyShliach, a project of Merkos 302, was founded with the goal of assisting Shluchim with providing Chassidishe Chinuch for their children. As the family of Shluchim continues to grow, MyShliach continues to expand its programming to fill the needs of Yaldei Hashluchim worldwide.

This summer, hundreds of Yaldei Hashluchim joined a top notch virtual camp that entertained, inspired and connected young Shluchim and Shluchos with their peers. Building off of its success, MyShliach is now gearing up for a year that will surpass the quality of care and programming extended to the Rebbe’s young soldiers on the front lines.

With the newfound ease with which society has adapted to virtual programming, MyShliach is excited to announce the launch of daily extracurricular classes, nightly Yeshivas Erev and every child’s dream; summer camp all year. MyShliach Virtual Camp will continue to run every Sunday.

Recently, a new Chinuch support system was launched to assist Shluchos with navigating the previously uncharted territory of homeschooling. It is a place where Shluchos can turn to for resources, guidance, and support from Shluchos who have experience in this area.

All of the aforementioned services are in addition to the great work that MyShliach does with its preexisting programs such as the Ach/Achos Sheli Chavrusah Program, Farbrengen in a Box, Mishnayos Baal Peh Program, Online Farbrengens, The Yaldei Hashluchim Book Library and enabling young Shluchim and Shluchos to join Tzivos Hashem and Chidon Sefer Hamitzvos.

“We are looking forward to a year of unprecedented success with our mission of enriching the lives of Yaldei Hashluchim across the globe” said Rabbi Mendy Kotlarsky, Director of Merkos 302.

For the thousands of young Shluchim and Shluchos around the world, 5781 is looking up!