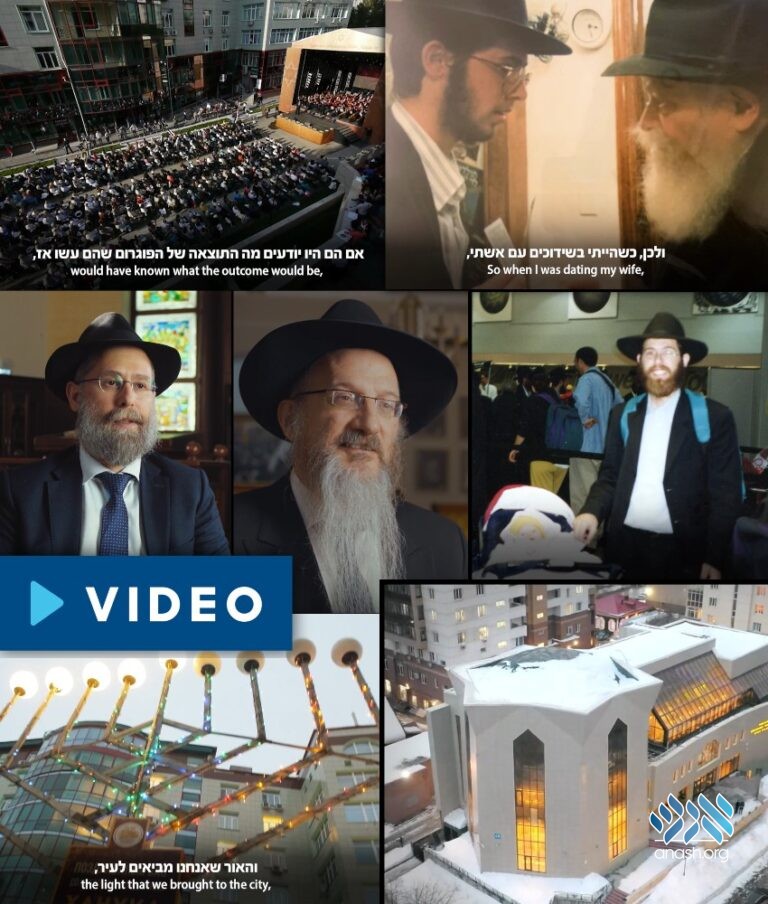 Watch: When Rabbi Schneur Zalman and Miriam Zaklos first visited the Siberian city of Novosibirsk they couldn’t envision moving to the city permanently. But 2 days before they were scheduled to depart, something unexpected happened that changed their lives forever.

The year was 1998. Rabbi Schneur Zalman Zaklos was 24-years-old, newly married to his wife, Miriam. They both dreamed of becoming Chabad emissaries anywhere in the world, with one exception.

“When I was dating my wife, I told her my destiny is to be a shliach,” Zaklos shared during a presentation at the 38th annual conference, held on Oct. 31 at the New Jersey Convention Center in Edison, N.J. She responded: “’I am ready to go … with you anywhere, except Russia.’”

Together, the young couple deemed Russia too far, too cold and too difficult. Still, when friends suggested that they meet with Rabbi Berel Lazar, the chief rabbi and head Chabad emissary of Russia, they took the meeting.

Lazar urged them to at least visit the city, all expenses paid, before declining the offer. This way, he contended, they could know what they were turning down. The Zakloses took Lazar up on his offer and flew to Novosibirsk, the third largest city in Russia, to spend Purim with its local Jewish community. The city was everything they were afraid of—the thermometer read -22 Fahrenheit the day they landed. The synagogue they were shown was a broken shell frequented more often by homeless elements in the city than local Jews, with bathroom facilities consisting of a frozen bucket in the courtyard. The young couple arranged a Purim program to the best of their ability and prepared to leave.

Two days before their return to Moscow, from which they planned to head on home to Israel, there was a break-in at the synagogue. Local thugs broke into the modest prayer room and tore it apart, strewing Jewish books around the room and depositing the Torah scroll on the floor. By the time Rabbi Zaklos got there the thugs were gone, leaving behind antisemitic graffitti threatening more.

“Sure enough, I get a call,” recalled Lazar. “It was the middle of the night and he was frantic.”

Lazar told Zaklos that the local government would not do anything unless there was media attention, so he asked the young rabbi to just show up at the synagogue and show the media what had taken place inside. Zaklos did as he was asked, and before long found himself facing TV cameras and microphones in an impromptu press conference.

“The first question I was asked was if I am the rabbi of Novosibirsk,” Zaklos recalled. At that moment the Conference screens flashed an image of a young Zaklos, an Israeli Lubavitcher Chassid who had gone to Novosibirsk with his wife for nothing more than a short visit, being asked by local Russian media how long he had lived in Novosibirsk and what brought him there.

“I haven’t been living here long,” the archival footage showed him responding. “I’ve only been here a short time, in order to the rabbi for the Jews here in Novosibirsk.” He then addressed the municipality directly: “You must truly do everything in your power that something like this should never happen again. When something like this occurs in a city, it is terrible and shameful. And the only way to ensure this is by finally having a place where it will be possible to build a large synagogue … .”

Even as the story went viral in Russia, the couple returned to Israel, where they were met with a barrage of congratulations from friends and family on their new position as Chabad emissaries and leaders of the Jewish community of Novosibirsk. One evening a month or two later Zaklos was sitting at the table with his wife.

“I tell her, ‘Listen, everyone in the world has decided and is sure that we are the shluchim to Novosibirsk aside from us,” remembered Zaklos.

The obstacles were many: Siberian isolation, antisemitic sentiment, and most of all, their own fear. Yet it was precisely these setbacks that propelled the Zakloses to accept their positon in Novosibirsk and set about kindling Jewish life in the frozen city, including the 2013 construction of a gleaming 375,000 square-foot Jewish center, a far cry from the dilapidated structure they had been met with.