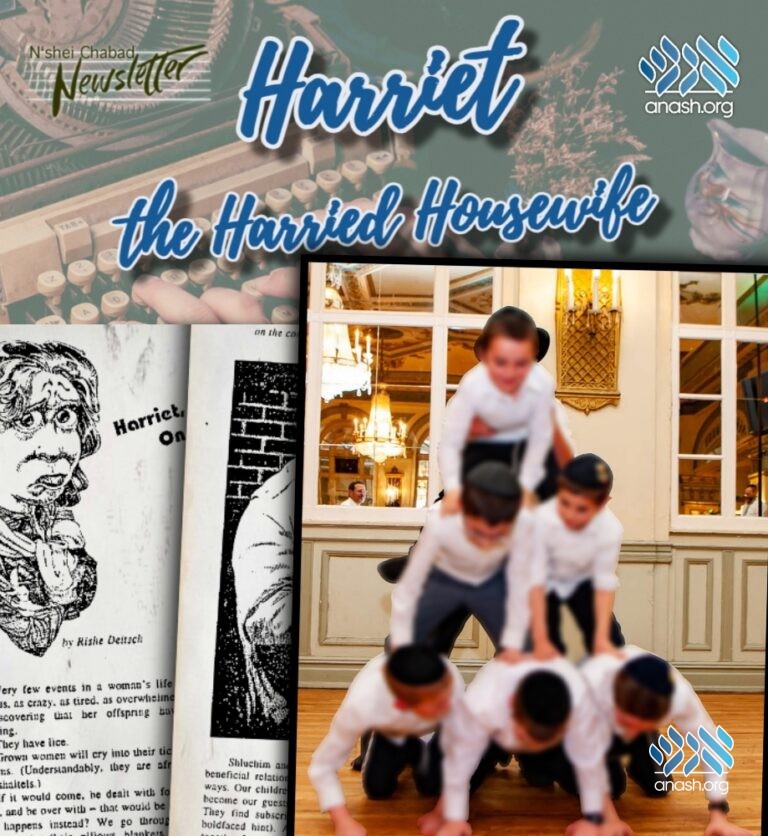 Installment 8 of N’shei Chabad Newsletter’s nostalgic Harriet the Housewife columns: Harriet writes of her friend, Millie, her previous parenting standards, and how that all changed when her mezinikel came along.

Millie’s in her 40’s now. When she had her first few kids, she was young, idealistic, and tough as cold broiled steak. She was unflinching about bedtime (7:01 P.M., come what may). She offered one type of hot cereal for breakfast, take it or leave it. No toppings. And if you wanted to get carried around on Millie’s person, well, either prove you have a fever of higher than 103, or you can forget about it, buddy.

And, wait! Did you think there was any point at all in tantrumming for a candy in the grocery store? Don’t even bother, babe – Millie knows that once she gives in once, it’ll be an everyday candy-buying affair. Toy store? You must be kidding. Millie wouldn’t even check her shaitel in the front window. Kvetching? Begging? Pleading? All the other mothers do? Can it, pal. This woman’s going straight home because 2:00 is nap time, and she means all four of you.

But now, 25 years later, NOW you should see Millie with her mezinikel, her baby son, her youngest, who is now close to four years old!

First of all, she refers to him as “the baby” which causes those of us with bona fide babies (diapers, non-ambulatory, teething, etc.) to look around and ask, “Who? Where?”

Then, she has gone from tough to soft in the extreme. The word “soft” just doesn’t do justice to how Millie treats Mezinikel. Just to be sure I wasn’t imagining things  I checked with Millie. The following are direct quotes.

“I asked him today if he was planning on taking one, and he didn’t answer me. But at least he didn’t throw his plate on the floor at the suggestion.”

“I struck a deal with him the last time we went on Kingston; If I bought him two lollies and a donut at the grocery, I would only have to buy him one bottle of bubbles at the toy store, so long as I let him ride at least two 25-cent sidewalk rides.”

And wait! There’s more! This two-ton Charlie, this almost-four-year-old Mezinikel, who cannot, physically, sit in a stroller because his feet will drag , this very same young man sometimes decides he is TIRED. When that happens, Mommy picks him up on those 45-year-old hips and carries him around.

Not for windows that work and a dishwasher would she have done that with her first few. But now, aahh yes, now things are different. No wonder the older kids, now in their 20’s, slink around the house muttering things like “These kids gets away with murder” and “Ha! I tasted my first chocolate when I turned eight and then only because I found it under a bed” and “What’s that kid doing up at 11:00 at night?” and other such long-suffering comments. No wonder they’ve started calling the Mezinikel “His Royal Dryness,” ever since he got trained, miraculously, at three and a half. (They were all trained before turning two, no monkey business, no negotiations whatsoever.)

And why do you think Mezinikel made an appearance at his sister’s forshpiel in Shabbos pants but a red and yellow polo shirt? Millie explains:

“Because he wanted to.”

No chance the other ones would have gotten away with that.

To quote Tevye, “Why? I’ll tell you why. I don’t know.” But that’s just the way it is. It’ll happen to us younger moms, too, just wait and see, says Millie with a knowing wink. And Millie’s not often wrong.

(This column is dedicated to my good buddy Millie, who is a real person. Her name has been changed to protect the embarrassed. Any resemblance to actual persons living in Crown Heights is not accidental.)