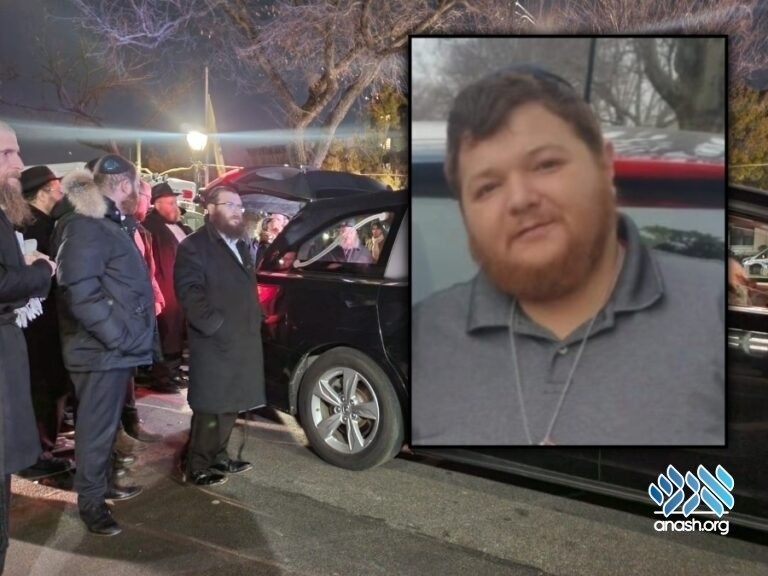 Oped by Rabbi David Debow: With a glimpse behind the scenes of what transpired in the time between Tzvi Kriegsman’s a”h passing in New York and his kevura in Tzefat, Eretz Yisroel, I learned a lesson in ahavas yisroel and an appreciation for Am Yisroel’s capacity for kindness.

Just a few days ago, on Monday morning, I was witness to a tremendous example of Chessed Shel Emes. From attending the funeral, I understood the tragic loss of a young father of 46 being laid to rest while his two wonderful daughters, his brother, his sister, and his mother along with friends and extended family felt an overwhelming loss.

However, with a glimpse behind the scenes of what transpired in the time between Tzvi Kriegsman’s a”h passing in New York and his kevura in Tzefat, Eretz Yisroel, I learned a lesson in ahavas yisroel and an appreciation for Am Yisroel’s capacity for kindness. I learned what kind of kiddush Hashem is possible when a dedicated group of determined people, in partnership with a supportive broader community, opened possibilities and created realities as they set about to fulfill Tzvi’s dying wishes.

Tzvi did not have an easy life. Escaping from Chernovtzi, Ukraine, shortly after the Chornobyl disaster, Tzvi’s family emigrated to America when he was just nine years old. This was to be just one of the many challenges he would face in his life. Barely after his arrival on American soil, Tzvi was diagnosed with Lupus. His mother, a pillar of emunah, fought for the best care possible. His condition seemed bleak and on his bar mitzvah, his friends were instructed to bid their goodbyes.

As Lubavitch Chassidim, the family, held fast to the Rebbe’s teachings and, defining the word b’tachon, they knew it was only Hashem who could determine Tzvi’s fate. As would happen several times in his lifetime battle with illness, HaKadosh Baruch Hu sent a refuah and his doctors oversaw a nes, as they regained control of his illness. Still, Lupus, and a host of complications remained present. Nonetheless, Tzvi was zoche to not only grow to see adulthood, but then, marry and father two wonderful daughters, Devorah Bracha (Devo), and Bayla. Challenges from the disease remained, and at times, Tzvi suffered such intense pain that he could not walk.

For much of his married life, Tzvi lived in Detroit, working for Superior Meats and One Stop Kosher, as much as his physical condition would allow. Despite their financial struggles, the Kriegsmans created a haven for many who would come and spend Shabbos and Yom Tov in their home, enjoying the relaxed and hospitable atmosphere. Tzvi never turned away a yid and could make friends with almost anyone. He would even make sure to regularly stock the foods his friends most appreciated. Tzvi overcame many nisyonos, as the disease and its complications could hospitalize him for months, yet he never lost faith.

Some years ago, after a severe round of complications that brought Tzvi close to death’s door, HaKadosh Baruch Hu determined once again that it was not his time. He pulled through and, soon after, as the situation dictated, found the koiychos necessary to pack up his family and move to Philadelphia.

As his illness continued to worsen, he would suffer memory issues so severe that, at times, he could not recognize his own family. But even then, in such darkness and confusion, yiddishkeit was etched in his neshoma. When told it was Shabbos, Tzvi recited a perfect kiddush for a nurse, though he couldn’t repeat to you what day followed. As his mind would clear, he considered his circumstances.

Though Tzvi had been stable for some time, he recognized he had limited time remaining. It was just a few short months ago that Tzvi made his dying wish: that he be buried in Israel. Understanding the financial reality, he recognized that, in all likelihood, he would have a modest burial in a cemetery close to home. Nevertheless, he felt the need to express this sincere plea to please make his final resting place on holy ground.

Tzvi always wanted the best for his two daughters, Devo and Bayla. When Devo finished high school, last year, she carefully considered her options. At the impetus of her NCSY director, Devo made the decision to spend a year in Israel learning Torah and focusing on personal growth.

Despite the financial and logistical challenges, as her family did not have the means to make this happen alone, a team of caring mechanchim came together. With NCSY in the lead and help from the Detroit Jewish Federation and the Midreshet Emunah v’Omanut Fund, a plan to get Devo on a plane succeeded.

When Devo came to us, barely two months ago, Tzvi’s condition was difficult but stable. No one expected that this would be their final parting. However, as his condition quickly deteriorated early last week, the doctors told the family that they did not expect him to survive much longer. A devoted friend pulled out a credit card and sent Devo on the next flight back to New York. What I did not realize at the time, nor could I have imagined, was that quietly, a team was being formed. A network of doers, of people who do not understand the meaning of “can’t be done,” people who know that when tragedy and crisis strike, ahavas Yisroel must rein. This is how I came to meet this incredible network of ba’alei chessed who worked a miracle to bring Tzvi home to Eretz Yisroel.

Tzvi passed away Thursday afternoon. Within hours a Charidy.com campaign was set up raising hundreds of dollars by the minute. As the challenges arose, so did the determination of this team. Renewing and obtaining passports, the logistics of the levaya and kevura were just the beginning. They woke up officials and accountants, booked flights, changed flights, secured documents in Philadelphia, driving those documents, overnight, to New York. But everywhere, kind, mission-oriented, people answered the needs of a family in crisis and rose to the challenge. Donations poured in from so many who were touched by Tzvi’s kindness.

As the challenges, and costs mounted, the team kept moving. Before they had a clear idea what would be raised, these ba’alei chessed, some of whom never met Tzvi, made a commitment to honor the wishes of another yid and to ensure the yisomim would fulfill their father’s final wish b’kavod. They offered their personal assurances, banked on siata d’shamaya, and the amazing generosity of Am Yisroel. With less than an hour before Shabbos, the preparations were largely complete: six new passports processed, a death certificate obtained, documents finalized, and nine family members booked on El AL Flight 8 departing JFK at 11:50 pm Motzi Shabbos.

After the heart-wrenching kevura Monday morning, Devo, Bayla and their mother came to, what has become Devo’s home in Israel, her midrasha in Yerushalayim. Her new friends, madrichot and teachers met her many old friends who travelled to the kevura and came to comfort the girls at their brief shiva in Israel. Together, tearfully, we listened and learned about the emunah, fortitude and devotion Tzvi and his family exemplified. It gave me and this amazing network of doers, who worked tirelessly from behind the scenes, a tremendous sense of relief to see the menuchas hanefesh of the yisomim, knowing they were enabled to give their Tatty the final chessed shel emes he wanted but never expected.

In last week’s parsha, Chaya Sorah we read how Avraham’s request from the B’nie Ches was to secure a burial cave in Eretz Yisroel so that he could bury his wife “from before my face” (Bereishit 23:4). What is added by the word “milfanai” (before me)? When a meis, a corpse, is before a person, it is all-consuming. Before the burial, the mourners are exempt from all positive mitzvos; an onein has no mental space for any concerns other than the burial of the beloved. Once that burden is lifted, once the meis has been removed from “before the face” of the mourners, only then can one begin the process of healing and returning to everyday life. We see this in the parsha, as only after Sorah is buried does Avraham tend to the business of a shidduch for Yitzchak. As I heard from the words of the yesomim, this wonderful team had removed a burden from their shoulders, knowing that their beloved father was properly attended to according to his own highest wish.

As the campaign continues and we hope to secure more funds to help the yisomim past the somber days of shiva, we wish they be comforted together with all the mourners of Tzion and Yerushalayim. May we soon witness the final redemption and be reunited with all of Am Yisrael, past and present.

Who is like your nation, Israel, one people in the land

Please Note: The Kriegsman Family Trust has been set up to ensure that all donations go directly to support the yisomim. Please open your hearts and wallets and let’s join the mechzikim and do our part to help these wonderful girls.