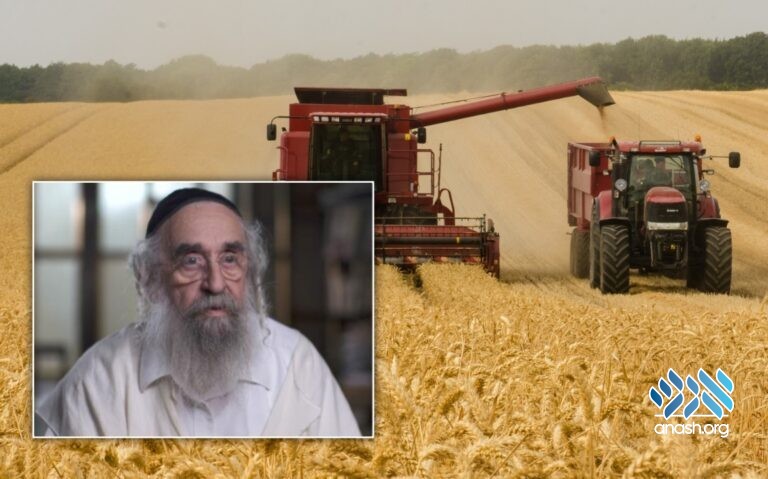 When Rabbi Avraham Kliers of Keren Hashvi’is asked the Rebbe for a letter of support for the fund, the Rebbe said “My Chasidim don’t need letters.” Instead, the Rebbe offered something else to show them.

The first time I was there, I asked him for a letter of support for the fund, in which he would call on others to contribute. However, as he explained, he did not put out letters of that nature. Instead, he suggested giving a donation to the fund in the form of a check.

“My chasidim don’t need letters,” he explained. “When you show them my check, they will understand on their own the need to give to the fund.”

And so it was: When people saw the check that we received from the Rebbe – a substantial donation of $750 – they responded in kind.

Rabbi Avraham Kliers worked for nearly forty years at Keren Hashvi’is raising funds to support farmers observing Shmitah. He was interviewed at his home in Bnei Brak, Israel, in September of 2018.

This story concerns Shmitah, the agricultural sabbatical mandated by the Torah once every seven years in the Land of Israel. It is now the middle of a Shmitah year, when thousands of farmers are refraining from working or profiting off the land.

I began working for the “Keren Hashvi’is,” (the Sabbatical Fund) in 1970. The fund was established by a couple of Jewish communal groups, the Agudas Yisrael and Jerusalem’s Edah Hachareidis, in order to support farmers in the Holy Land who were observing Shmitah. Rather than relying on any Halachic loopholes that allowed them to continue working, these farmers were letting their land lie completely fallow.

In 1972, before the Shmitah year was due to commence, Rabbi Binyomin Mendelsohn of Komemiyut, a religious village, asked that we promote the vision of the fund and expand its activities.

The subject of religious agricultural law in general, and Shmitah in particular, was very close to Rabbi Mendelsohn’s heart. In fact, it was the reason that he turned down a prestigious job offer from the community of Kiryat Ata, preferring the rabbinate of a small agricultural settlement.

When we first met, he inquired about my great-grandfather Rabbi Moshe Kliers, who had served as the Ashkenazi rabbi of Tiberias while working extensively with the Jewish farmers in the surrounding Galilee, encouraging them to observe Shmitah and other agricultural laws.

In 1913, my great-grandfather, alongside Rabbi Avraham Yitzchak Kook and Rabbi Yosef Chaim Sonnenfeld, took part in a famous rabbinic tour of the agricultural communities of the Land of Israel. Over a month and a half, they visited twenty-six young villages in the North of the country reaching out to and inspiring the pioneering settlers there. The farmers had arrived in the Second Aliyah wave of immigration, and most of them had adopted a socialist outlook while straying from traditional Jewish life. The rabbis struck a chord with them, encouraging them to return to the fold and to strengthen their religious observance, especially in the fields of kosher, Shabbat, family purity, Jewish education, and the agricultural laws.

Following in their footsteps, in 1972, Rabbi Mendelsohn wore out the soles of his shoes as he did the rounds among the villages, speaking with the farmers, and promoting full Shmitah observance. My job was raising the funds necessary to support “those mighty in strength, who perform His word,” as the Midrash, citing Psalms, calls the Shmitah-observant.

During every Shmitah year, I would travel to the United States, going around Jewish communities, visiting the great heads of the Lithuanian yeshivot, and the chasidic Rebbes of America. These rabbis were interested in the activities of Keren HaShvi’is and were delighted to hear that, with every seven-year cycle, the ranks of the Shmitah-observant were steadily swelling. They opened their doors to me, supported our work, and called upon the members of their communities to assist us.

On every one of these trips, I spent several months in America, and of course I also visited the Chabad headquarters on 770 Eastern Parkway, and even attended the Rebbe’s public gatherings. The first couple of times, in the summer of 1973, and later in 1979, I also had the privilege of having a private audience with the Rebbe. My first one was just a few short minutes, but the second one was much longer – some three-quarters of an hour.

I was invited to come at 2:30 AM, but it was close to a quarter to four by the time I actually met the Rebbe. First, he wanted to hear about my great-grandfather, Rabbi Moshe Kliers, and then inquired about Rabbi Mendelsohn from Komemiyut and his Shmitah activities. The Rebbe asked about the connections he had with farmers outside of Komemiyut, and how he was influencing them to observe Shmitah.

Then the Rebbe wanted to hear about developments in the fund since our previous meeting, and whether its scope of work had expanded since then. He was amiable, he clearly cared, and his numerous questions about our activities displayed his penetrating insight into the subject.

“What do the farmers do throughout the year, when they are refraining from agricultural work?” asked the Rebbe. “Every other year, they are busy, and have little free time to learn Torah. Do they devote more time to study in the year of Shmitah?”

“Definitely,” I answered. “We have set up special institutions for ongoing Torah learning for those farmers to attend. They can designate times to study, listen to lectures, or set up private study sessions with young Torah scholars – each according to his level of knowledge and ability.”

The Rebbe waxed lyrical about those who observed Shmitah and the self-sacrifice – as he put it – that they displayed in keeping the Torah’s commandments in their straightforward meaning and to the fullest extent. I related to him that among our recent recruits were some older farmers, in their fifties and sixties, who were beginning to observe their very first Shmitah.

“And what pushed them to take such a step?” the Rebbe asked. I could see the deep satisfaction he felt when I told him that the main motivation of these farmers was simply keeping G-d’s commandments at the highest possible level. Certainly, the motive wasn’t financial; the assistance we provided them wasn’t even enough to cover their losses.

Every time I visited him, the Rebbe expressed his desire to become a partner in our project and to support the fund. “Every additional person keeping Shmitah is a tremendous thing,” he remarked. “And if we have the ability to assist and encourage them, that is worth doing.”

The first time I was there, I asked him for a letter of support for the fund, in which he would call on others to contribute. However, as he explained, he did not put out letters of that nature. Instead, he suggested giving a donation to the fund in the form of a check.

“My chasidim don’t need letters,” he explained. “When you show them my check, they will understand on their own the need to give to the fund.” And so it was: When people saw the check that we received from the Rebbe – a substantial donation of $750 – they responded in kind.

When I came again seven years later, the same thing happened. After discussing the Fund’s activities at length, the Rebbe asked how much he had given last time, and then asked his secretary to prepare a check of $768 – an $18 addition to the previous sum. The Rebbe handed the check to me, and blessed us and the farmers with great success.

It should be noted that in the Shmitah year that began in 1987, I went by the Rebbe as he was greeting people on Sunday. He gave me a blessing, and instructed his secretariat to prepare a donation to the Fund – this time for $800. The next Shmitah began in 1994 and, owing to the state of the Rebbe’s health, he wasn’t receiving visitors. Even then, however, the Rebbe’s secretariat sent a donation for $818.

When I walked out of the Rebbe’s room after that long audience in 1979, I felt a sense of elevation. I had planned on being with him for just a few minutes – that’s what the secretaries had told me to expect – and did not imagine that the Rebbe would dedicate so much time to me. I can say that his interest in every detail, along with his joy and satisfaction at hearing about Jews keeping Shmitah, uplifted my spirits and gave me a lot of encouragement to carry on our work enthusiastically.