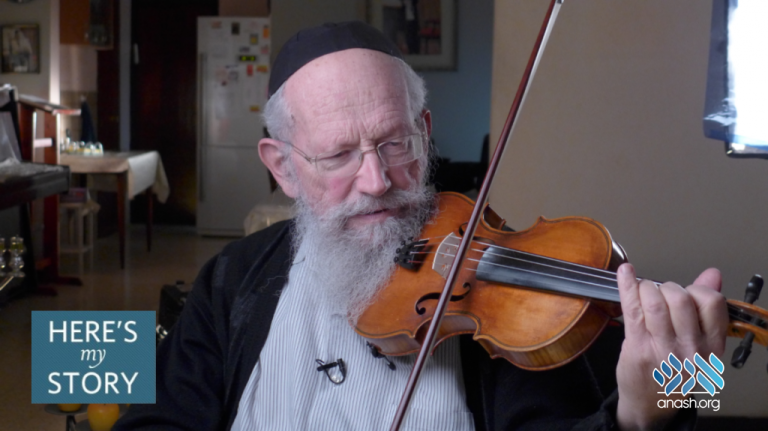 During my fourth year of study at the Technion, Israel’s Institute of Technology, I experienced a spiritual awakening that was difficult for me to define at the time. I searched in all sorts of places before arriving at the conclusion that my path lay in Judaism. As a result of a connection that I forged with Rabbi Reuven Dunin of Haifa, and with Rabbi Moshe Weber of Jerusalem, I began studying at the Lubavitch yeshivah in Kfar Chabad. And, after about a year of study, I began to work as a teacher in the Chabad trade School, and then got married.

My first visit to the Rebbe took place in 1968, a year after my wedding, in the month of Tishrei, the month of Rosh Hashanah, Yom Kippur and Sukkot. As I was leaving for New York, my acquaintances recommended that I take my violin with me, and I did.

I began playing the violin at a relatively young age, and I had been privileged to study with some of the best teachers in Israel. And I played with a number of orchestras, including the Technion orchestra, so I had a wide musical background which I eventually integrated into the chasidic world of music. And indeed, during the time that I was studying in yeshivah, I was privileged to play a few times at farbrengens and at various Chabad events held on kibbutzim throughout Israel.

During my visit to the Rebbe in New York, I played a few times in my hosts’ sukkah, and then came Simchat Torah. At the end of the holiday, the Rebbe held a farbrengen and, after conducting the Havdalah ceremony, distributed wine from his cup. When I came up to receive some, I asked the Rebbe if I might play my violin. The Rebbe looked at me for a moment with a penetrating gaze and said, “Very good, please.”

I took out the violin which, at the urging of some of the chasidim I had run back to get after Havdalah and stored under the bleachers. Two well-known singers, Rabbi Moshe Teleshevsky and Rabbi Shamshon Charitonow were standing next to me, and after a brief consultation with the Rebbe, they told me to play Essen est zich. This song bemoans how easy it is to connect with physical pleasures, yet how difficult it is to pray, its soulful tune expressing a deep longing and yearning for G-dliness.

The hall was packed as I began to play, while the Rebbe continued to pour wine for all the many people who filed passed him. When I finished the niggun, the Rebbe gestured that something wasn’t right and he motioned to the crowd that they should sing the song so that I could learn it.

The two singers tried to explain to me what the Rebbe meant, that there are two nuanced notes that I played slightly incorrectly, and they demonstrated to me the way it should go.

I tried a few times until I got it right. After I corrected that part, the Rebbe asked me to play it again a few times, adding, “Once again, once again,” and “pianissimo,” using the Italian musical term which means “very softly.”

In music, the dynamics of the volume give the sound its color and feeling. From a dry technical perspective, you can play the same part at the same volume a few times again and again, but that would not do the melody justice. What the Rebbe was trying to tell me was that this part of the niggun was expressing yearning, and therefore the softness of the sound has significance. I repeated it more softly, and suddenly the Rebbe turned to me and said, “But the last note you should make a tekiah gedolah,” referring to the forceful long note sounded with the shofar on Rosh Hashanah. And I tried to do that, making it last as long as I could.

I continued to play a few more songs ending with the famous Ufaratztah. I played it enthusiastically, as I was used to playing it at the Chabad events in Israel. At a certain point the Rebbe turned to me and said, “You’ve played it as they play it in Israel, now play it like they play it in Babylon,” referring to the Diaspora.

I found this usage interesting because at the farbrengen the Rebbe spoke about Rabbi Zeira who had come from Babylon to Israel and who then fasted one hundred times to forget the Babylonian method of study so he would be able to learn the Jerusalem method.

I played the song several times over, until I played it the way that the Rebbe had asked for.

When the Rebbe started to leave the hall, the crowd sang Ki B’simchah Teitzeiu, and the Rebbe looked towards me, as though to signal that I should join in. I immediately began to play along with the crowd, and then the Rebbe instructed, “Make a crescendo,” using another Italian musical term which describes a sound that grows louder and louder. I knew the term, but over the singing, I didn’t hear exactly what the Rebbe had said, and I leaned toward the Rebbe to ask what he meant. “The opposite of pianissimo,” he said.

Of course, I played the song again with liveliness, and the whole crowd sang with enthusiasm. It was a wonderful event.

A few days later as we were getting ready to return to Israel, with buses waiting to drive us to the airport, the Rebbe came outside 770 to say good-bye to us. When he asked “Where is Shmuel Katan?” people told me to take out my violin and start playing.

I remember this unique and moving moment:

It was nighttime and we are walking backwards, our faces towards the Rebbe, with me playing. I played Essen est zich, as the Rebbe had taught me, the last stanza more and more “pianissimo,” to expresses the emotion of yearning we were all feeling. I continued to play as we were walking away, getting further from the Rebbe, and I will never forget the Rebbe’s fatherly gaze following us with a look of love and longing.

Rabbi Shmuel Katan served as a chemist and an engineer in the Israeli Air Force, and as a teacher at the Kfar Chabad Trade School. He was interviewed in his home in Kfar Chabad, Israel, in December of 2015.