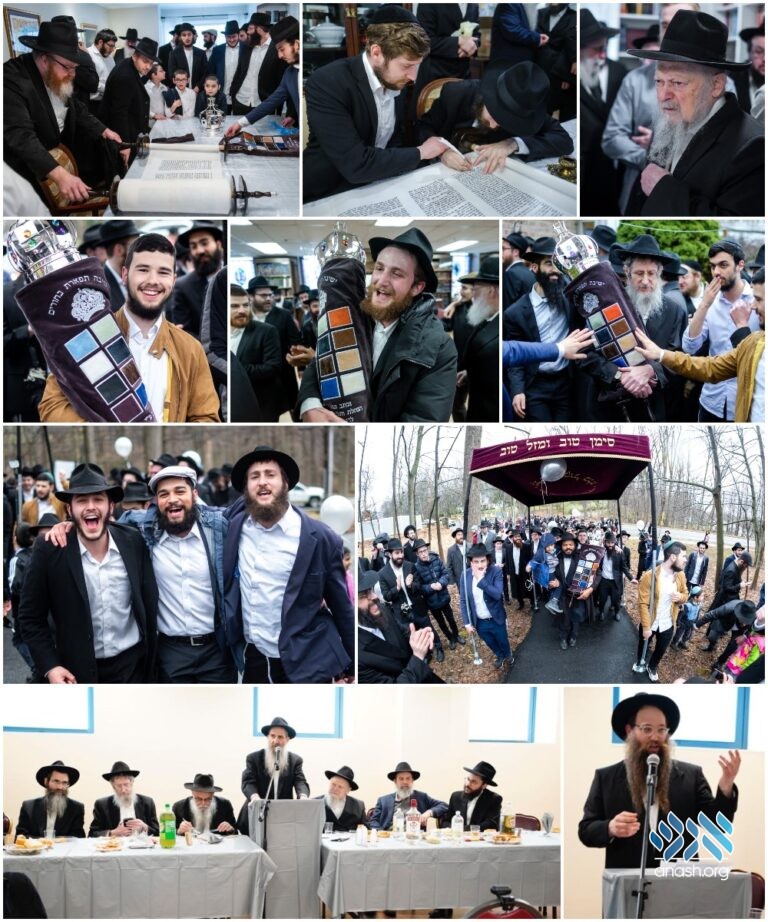 Yeshiva Tiferes Bachurim in Morristown ended a zeman of learning with a weekend packed with very special simchos – a kidush, aufruf, sheva berachos, l’chayim and hachnosas sefer Torah all rolled into a few short days.

Yeshiva Tiferes Bachurim ended a zeman of learning, inspiration, and excitement with a weekend packed with very special simchos – a kidush, aufruf, sheva berachos, l’chayim and hachnosas sefer Torah all rolled into one weekend.

On Shabbos, a kidush celebrated the birth of Rabbi Dovid Dick’s granddaughter, and an aufruf marked the upcoming wedding of Alex Bernstein and Daniella Ellias. Rabbi Yaakov Wagner, who was farbrenging with the talmidim ahead of his father’s 25th yahrtzeit in the coming week, spoke about the need to tap into the power of “chidush” – to rise above that which was and innovate something new.

On Sunday morning, Rabbi Chaim Brafman began the day by teaching the famous ma’amar l’hovin inyan kesivas sefer Torah. This was followed after davening by a siyum of the sefer Torah commissioned to be written for the 50th anniversary of Tiferes Bachurim.

Rabbi Yosef Greenberg represented the early hanhola of Tiferes, Rabbi Avrohom Lipsker zohl zein gezunt as well as Rabbi Wichnin and Rabbi Fitzi Lipskier aleihem hasholom. The words of the Rebbe were echoed – that entering into a new “yovel” must be an “aliya b’ein aroch” – climbing up to an entirely new level from the first “yovel.”

The entire Morristown community flooded the streets to welcome the new Torah. The display of pure and exalted simcha as young and old danced together brought many to tears.

Hakofos in Tiferes zahl went on for hours, joined by the bochurim of Tomchei Temimim and uplifted by the music of Ashi Seper. This was followed by a grand seudah celebrating the milestone, joined by alumni from the last fifty years!

Rabbi Moshe Herson recounted the Rebbe’s earliest instructions regarding Tiferes Bachurim and how the Rebbe chose the name for this mosad. Rabbi Tuvia Teldon, Rabbi Menachem Shmidt and R’ Moshe Morganstern all shared nostalgic memories of the inspiring first years of Tiferes and how it has impacted their lives. Rabbi Shaul Wertheimer, Dr. Yehoshua November and R’ Chaim Mazal each spoke emotionally about how the guidance they continue to get from yeshiva directs them in all of their steps forward.

The seudah was “topped off” by a Sheva Berachos for Moshe and Shira Colin, and immediately followed by a l’chayim for Yehoshua Louis and Tehilla White. Rabbi Wagner also announced at the seudah the launch of a new gemach to specifically aid Tiferes alumni. On clear display throughout the weekend was the care and love that Tiferes invests in each one of its students, and the fantastic effect its students have as they spread the Rebbe’s vision across the entire world!