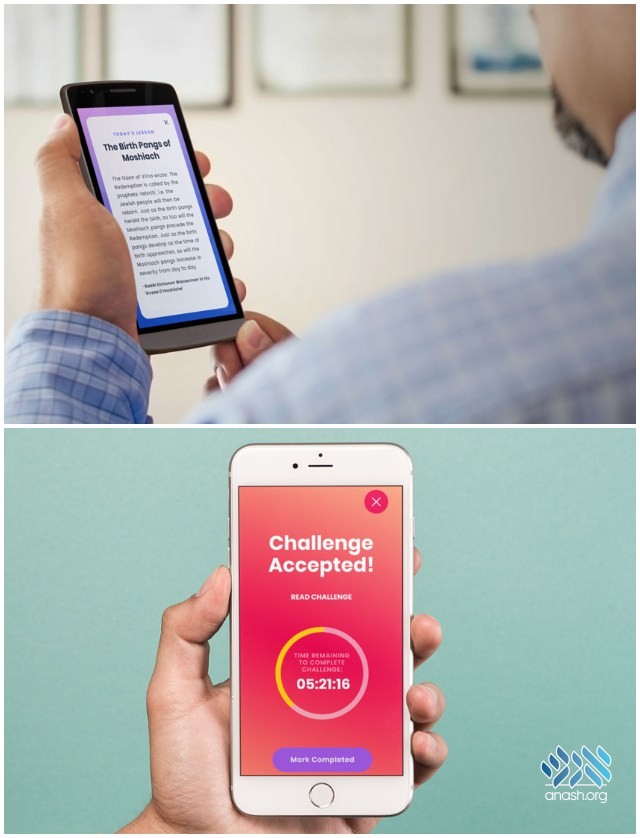 The ‘Moshiach Now’ app, which contains Moshiach lessons, videos, and challenges, has been downloaded by over 10,000 users. A new upgrade contains many new features, including an update to the number of brachos to be said when Moshiach arrives.

Rosh Chodesh Adar is the official launch of the newly updated Moshiach Now App. It is being relaunched after an extensive upgrade. The new update features stunning graphics and offers loads of brand new features and an improved user experience.

Created by the Saber Team Jewish Apps, the Moshiach Now App is part of their lineup of popular applications which includes the Tefillin Guide, Mezuzah Guide, and Chanukah Guide App. With over 10,000 downloads on the App Store and Play Store, the Moshiach App was poised for an upgrade and expansion.

“With so many users we realized that this has the potential to be something big,” says Shmuel Aber, CEO of the Saber Team. “We reworked the app to create a platform that combines learning Inyonei Geula and Moshiach with a practical follow-through, so users can actively participate in efforts toward bringing Moshiach on a daily basis.”

One of the biggest updates is the challenge feature, which allows users to choose from 3 tracks with a unique mitzvah in connection with each daily lesson. The user profile records daily challenge points so users can keep track of their progress.

Another noticeable change from the previous version of the app is the number of brachos that are said when Moshiach comes. Upon consultation with Rabbonim, the Saber Team was made aware that there will be six brachos that will be said upon the coming of Moshiach, instead of the (commonly believed) five brachos. The new upgrade includes all six brachos so that users can familiarize and ready themselves for the appropriate response to Moshiach’s arrival.

Other exciting new exciting features include:

This new update is just the first of many planned expansions for the app. The developers aim to broaden the applications and features with each coming update and would love user feedback and ideas. To share an idea or get involved, please email: [email protected]