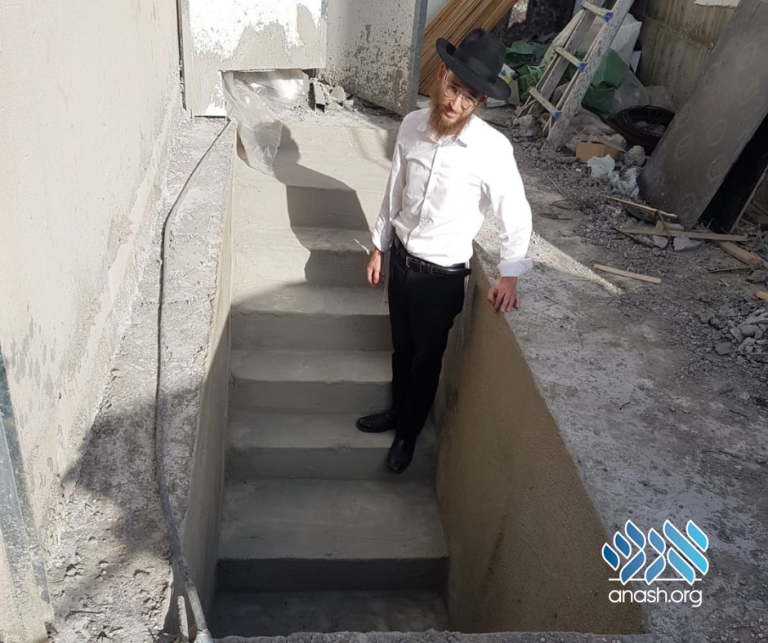 Amid much excitement, the community of Moshav Gilat has just opened its first Chabad mikva for men. The mikva was dedicated by philanthropists Rabbi Meyer & Shaindy Gutnick in honor of the yahrtzeit of Rabbi Gutnick’s father, Reb Sholom Dovber Gutnick a”h, on Chof-Hey Iyar.

This week, after much effort, difficulty and finally, success, a mikva for men was opened in Moshav Gilat. Rabbi Lior Abada, shliach to Moshav Gilat, has tried several times to have the local mikva expanded to include a mikva which is bor al gabei bor. Each time, the religious council rejected his requests due to lack of funds.

When Rabbi Abada returned from last year’s kinus hashluchim, he noticed that the mikva was under renovation. Immediately, he again applied to the religious council, communicating to them the importance of having a mikva built in this way.

Finally, the religious council announced that they were willing to build the Chabad mikva so long as Rabbi Abada would contribute all of the funds. Rabbi Abada was overjoyed. That is, until he inquired into the costs and was told that he would need to come up with 300,000 NIS by the end of the week, or the opportunity would be lost!

That same day, Rabbi Abada began walking from house to house in the community, raising significant funds; it was, however, not enough.

Through great effort and tremendous siyata dishmaya, he managed to secure funding for a majority of the project. Finally, Rabbi Abada decided to come to Crown Heights to raise the remaining funds.

After an exhausting period of going door to door, mustering every bit of strength to complete this holy project, Rabbi Abada noticed a man sitting in his car, sorting through a pile of mail. Figuring he had nothing to lose, he knocked on the window and began sharing the story of his struggle to establish a Chabad mikva for men, the miraculous funding he had procured thus far, and the remaining money he urgently needed to raise.

The man, whom he had never met before, listened quietly until the end of his tale. Immediately, he pledged a donation of $10,000. Rabbi Abada told him that, while this was a generous contribution, it was not enough to cover the rest of the project. To his great surprise, he was not thrown out of the car, but asked to meet the man at his house the next day.

It was only as Rabbi Abada entered the man’s home on the following day that he realized he had been speaking with Rabbi Meyer Gutnick. Rabbi Gutnick greeted him warmly and proceeded to write a check for the full amount still needed to complete the mikva!

At the dedication of the new mikva, the minister of religious affairs announced plans to build new mikvaos in two nearby communities. The news was received with great excitement.