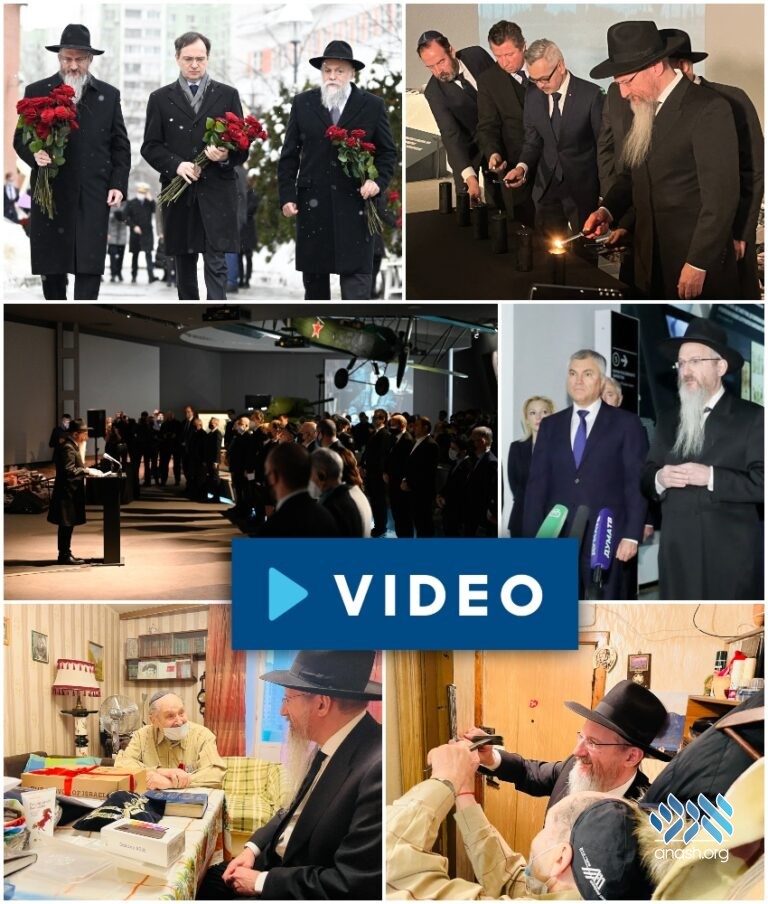 Holocaust Memorial Day was marked in Russia with an impressive ceremony at Moscow’s Jewish Museum, but for Chief Rabbi Berel Lazar, the highlight of the day was putting up a mezuza for a war veteran.

A special ceremony at the Jewish Museum of Moscow marked International Holocaust Memorial Day, the anniversary of when the Red Army liberated Auschwitz’s prisoners.

The ceremony, attended by government representatives, dozens of ambassadors, community leaders, museum administrators, and many media outlets, began with the recital of the “Keil Molei Rachamim” prayer by Russia’s Chief Rabbi Berel Lazar. Also in attendance were Mr. Vyacheslav Volodin, Chairman of the State Duma of the Russian Federation, Rabbi Alexander Boroda, President of the Federation of Jewish Communities in Russia.

The event took place in the Jewish Museum, which opened its doors nearly a decade ago with the financial support of Russia’s president Mr. Vladimir Putin. Ever since, it has seen tens of thousands of visitors monthly, many of them hearing for the very first time about the suffering of our people on Russian and European soil during the second World War. They also learn about the history of the Jewish People since the creation of the world, which undoubtedly causes a newfound respect towards the Jewish population. The impact of this can clearly be felt with antisemitism in Russia now at an all time low.

As part of the assistance projects to aid Moscow’s elderly Jews, the Shaarei Tzedek Chesed Center adjacent to the Jewish Museum, has begun a new intensive project using advanced technological devices which were commissioned and specially adapted for the elderly to be able to connect. They receive assistance from the Chesed Center on a daily basis through a variety of programs which include various workshops, motivational talks, encouragement, and more.

The first to participate in this project are the Jewish veterans who fought against the Nazis. The project opened on International Holocaust Memorial Day by the founder of the Chesed Center, Rabbi Berel Lazar, who personally visited 94 year old veteran Mr. Kushnerov who fought in the Soviet army. Rabbi Lazar put up a mezuza on his door, and presented him with the new device.

Upon receiving this gift, Mr. Kushnerov’s face lit up, and he expressed his thanks for all the assistance that he receives throughout the year from the Center’s employees and volunteers, who together with the JOINT, are of great aid to Moscow’s thousands of elderly and needy.