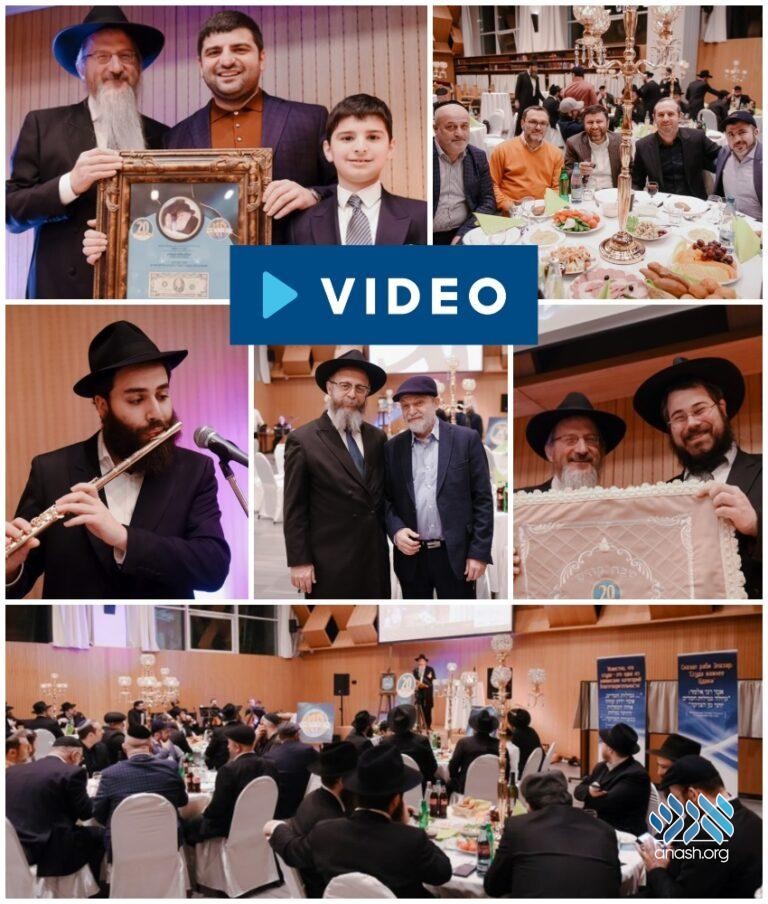 In what has become a yearly tradition, the central Gmach of the FSU once again held its annual Melava Malka Gala Dinner on Shushan Purim. This is the yahrtzeit of the young shlucha Chaya Mushka Lazar o.b.m. in whose memory the Gmach was founded by her father, Chief Rabbi of Russia Berel Lazar. The Gmach assists shluchim, Rabbis, and members of the Jewish community throughout Russia.

This year marks twenty years of extensive charitable activity with the most popular being interest-free loans that have assisted hundreds of Rabbis, and thousands of Jews, with continuous growth each year to the great joy of many.

The event took place in the beautiful Shul Hall at the Machon Chamesh University in Moscow’s Sokolniki district. The Guest of Honor was the Shul’s sponsor, philanthropist Mr. David Aminoff, one of the funds greatest supporters, who heads the Chaza”k Fund which gives financial aid to families with new babies, as well as to alumnae of Moscow’s Jewish schools wishing to get married according to Jewish law.

After the main speech was delivered by the Chief Rabbi, unique gifts were presented to those who donate and support the Gmach on a regular basis. Special thanks were given to members of the Gmach committee who oversee the Gmachs’s activities throughout the year.

The highlight was a raffle amongst all donors and supporters on a unique twenty dollar bill that was sent by the Lubavitcher Rebbe. It was sent to the Gmach in Philadelphia exactly thirty years ago, along with a letter full of blessings and thanks.

After bentching, and a pleasant interlude of Chassidic music, the guests left in uplifted spirits of joy and gratitude for the many charitable activities taking place all over Russia, and especially in Moscow.