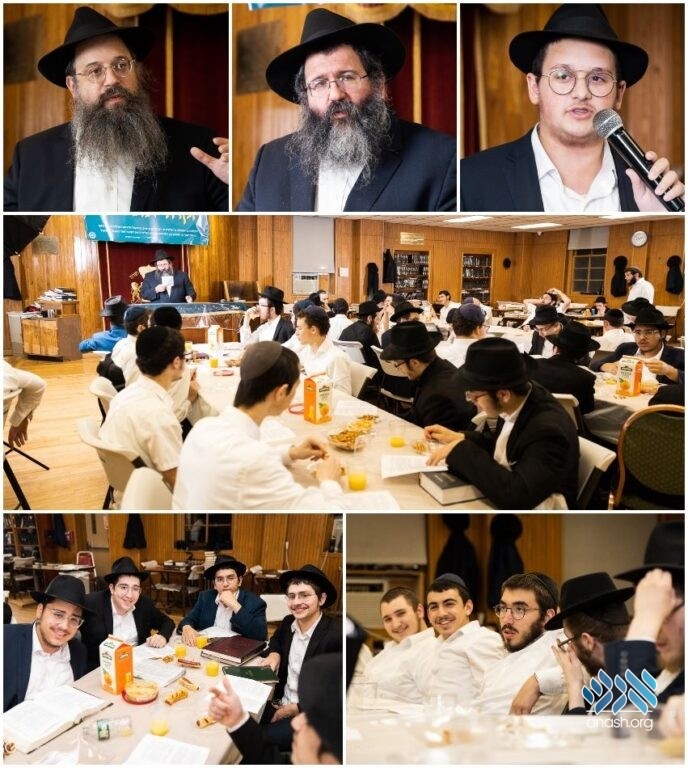 As per instruction from the Rebbe, and in connection with Chof Hey Elul, the Vaad Kinusei Hakel in Yeshivahs Tomchei Tmimim Morristown, arranged a Kinus Hakhel this past Tuesday night, over 100 bochurim participated in the gathering.

During the summer of 5747, the Rebbe said that the preparations for Hakhel should already begin in the weeks prior to Rosh Hashana. The Rebbe, therefore, asked that everyone should start making Hakhel gatherings starting in Elul 5747.

As per this instruction from the Rebbe, and in connection with Chof Hey Elul, the Vaad Kinusei Hakel in Yeshivahs Tomchei Tmimim Morristown, arranged a Kinus Hakhel this past Tuesday night, in the main zal of the yeshiva. Over 100 bochurim participated in the gathering.

The program began with Hatomim Moshe Kaplan welcoming the crowd. He then called up Rabbi Leima Wilhelm, who taught a part of the Rebbe’s letter from Yemei Haslichos 5727, in which the rebbe explains that Hakhel is repairing one’s machashava, dibur, and maaseh. He went on to say that even your typical breakfast should be a Hakhel, to add in Torah and Mitzvos, and become closer to the King.

Following Rabbi Wilhelm’s words, a video of the Rebbe was shown. It included the Rebbe’s address to the Machane Israel Development Fund on 7 Tishrei, and the end of Kos Shel Brocha Motzei Simchas Torah 5748 when the Rebbe gave a special brocha that people see success in making Hakhel gatherings.

To end off the kinus, Rabbi Chaim Schapiro described some of his memories of Shnas Hakhel 5741 and 5748. He emphasized how the whole year the Rebbe was requesting that everyone increase in joy, continuing even after the histalkus of the Rebbetzin on 22 Shvat.

With that, the MC announced that the Vaad Kinusei Hakhel plans on making many more kinusim throughout the year.

A special thanks goes to bochurim Mednel Moya, Meir Danow, and Mendel Susskind for arranging the kinus.