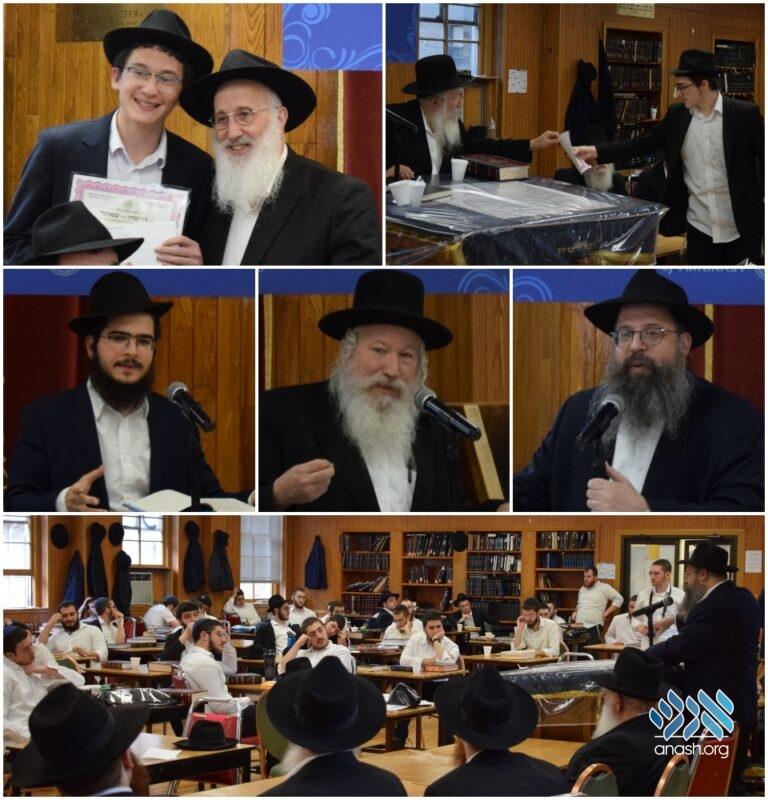 A celebration at Yeshivas Tomchei Tmimim of Morristown marked a siyum on Masechta Shabbos, studied ba’al peh by the bochurim in the Mivtzah Torah program over the past year.

A celebration at Yeshivas Tomchei Tmimim of Morristown marked a conclusion of two highly successful programs that heightened the limmud haTorah in the Yeshiva over the past year.

The first was a Mivtza Torah program, where bochurim studied the entire Maseches Shabbos ba’al peh over the course of the year. The Mivtza brought a noticeable chayus to the yeshiva, headed by Rabbi Moshe Herson, Dean of the Rabbinical College of America and Head Shliach of New Jersey. The Siyum on Tuesday celebrated the bochurim’s accomplishment, and awarded them for excelling in their learning.

Bochur Moshe Aryeh Engel of Denver, Colorado, one of the mesaymim, delivered a sicha of the Rebbe, followed by an address by Rosh Yeshiva Rabbi Sholom Spalter, who ran the Mivtzah Torah.

Rabbi Spalter then distributed the rewards and certificates to the bochurim who had completed the entire Masechta.

The yeshiva then recognized the bochurim who had excelled at a Halacha l’iyun curriculum, run by Rabbi Aaron Dovid Gancz. Rabbi Gancz addressed the bochurim, and then distributed awards to each participant in the program.

The bochurim then heard from R’ Shloimy Greenwald, an alumni and supporter of the Yeshiva, and bochur Shmuly Begun of S. Paulo, Brazil, made a siyum on Shabbos.

The yeshiva also gave special recognition to bochur Ashi Seper, of the Five Towns, NY, who had recently concluded the entire Shas, after three years of studying, and will be celebrating with a grand siyum in the coming weeks.

The end of the yeshiva year also marked the successful conclusion of another year of Haoros Ubiurim of the Morristown Yeshiva. During the past year, the chavrei maareches Levi Greenberg and Avrohom Goldberg, published 2 large kovtzim and a hard cover sefer, with thousands of pages of chiddushei Torah.