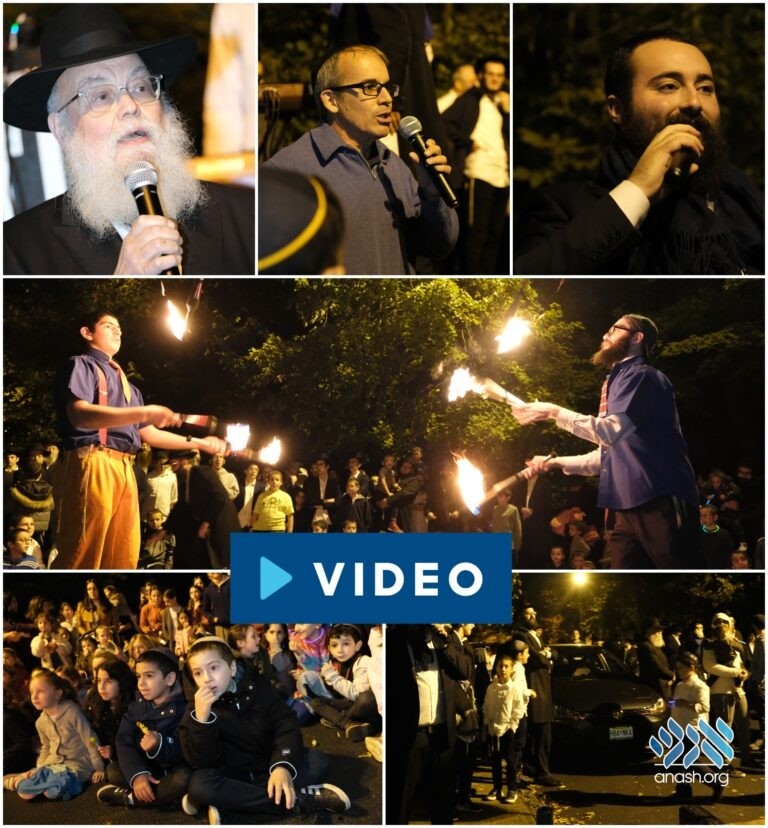 The Chabad community of Morristown, NJ, gathered on Sukkos for their first-ever Mega Hakhel and Simchas Beis Hashoeva celebration, with joyous dancing, a childrens program and a siyum harambam.

The Rebbe says that if you work on Hakhel you are guaranteed success! Who would have believed that this could come together in such an amazing way?

Bochur Zalmy Wagner of Morristown, NJ, decided to pull off a Mega Hakhel event in his hometown and got to work. It dawned upon him that right next to the central community there is a large parking lot that can be used. He set out to contact the county and received the appropriate permits.

Next he brought together local talent. Guitarist Moshe Morgenstern and base player Yehuda Parret joined with local bochur Yossi Perlow on the drums and Tiferes bochur Yehuda Soble on the keyboard to form the band. Berel Dick from Morristown was contacted and was the featured singer, he led the event into a joyous storm of dancing! Kasriel Bongart led a magnificent fire juggling show with the assistance of Avremy Wolosh.

Yet, when the emcee Rabbi Boruch Hecht and the band were talking just minutes before the event they still had no idea if people would actually show up. But then the weather turned out to be perfect and it all worked out in an unbelievable way.

Community spiritual leader Rabbi Zalman Wilshansky spoke about Hakhel and how everyone is a king. Former Mayor Jeff Grayzel thanked Rabbi WIlshasnky for the dvar Torah and said that now he knows that he has a new title not just former mayor but also king!

Rabbi Yitzchak Tenenbaum made the siyum Harambam. The 12 pesukim were recited by the beautiful children while fun loving community member Yankel Miller made sure the program kept on moving along! Morristown based photographer Michoel Livshin captured the evening in the pictures presented here.

“It was an experience to remember! An event which brought the community to an all new level of importance and unity,” organizers said.