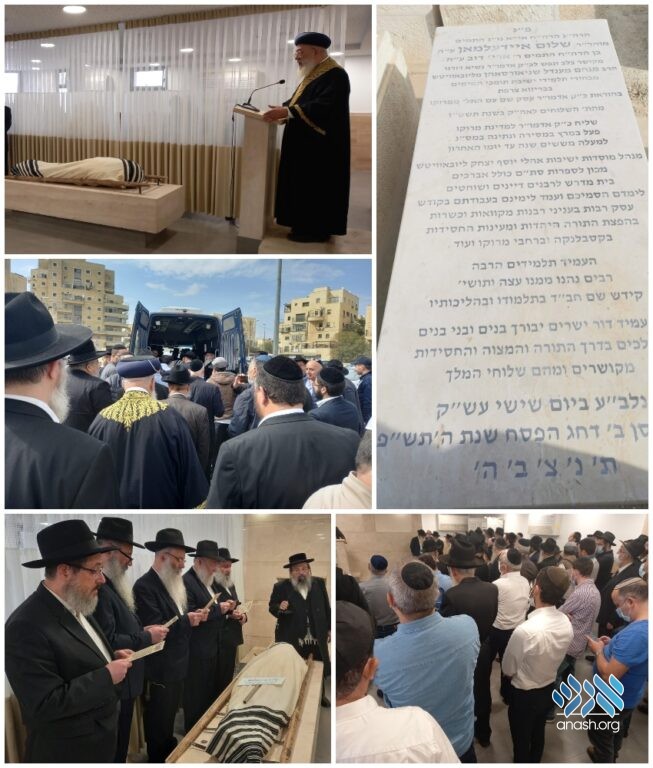 Nearly 2 years after he passed from Covid-19, the Shliach to Casablanca Rabbi Sholom Eidelman a”h, was reinterred in Har Hazeisim in Yerushalayim. Participants were amazed to see, that despite the passage of time, the shliach’s body was entirely complete.

In a special operation performed by ZAKA volunteers, the Chevra Kadisha of Casablanca, and representatives of families, the bodies of seven Jews who passed away from coronavirus and were buried temporarily in the Jewish cemetery in Casablanca about a year and a half ago, were reinterred in Eretz Yisroel.

Among them was the coffin of Rabbi Sholom Eidelman, the head shliach of Casablanca, Morocco, who passed away on the second day of Pesach 5780, at the age of 83.

Rabbi Eidelman was reinterred in Har Hazeisim in Yerushalayim on Wednesday following a levaya that was held at the Shamgar Funeral Home.

For more than 60 years, Rabbi Eidelman oversaw a dozen Chabad of Morocco Jewish schools and is mourned by tens of thousands of students he taught throughout the decades. He opened and ran a kollel where he trained most of the rabbis and shochtim in Morocco. Among his students were Yerushalayim’s Chief Rabbi and former Chief Rabbi of Israel Shlomo Moshe Amar, and Montreal Dayan Rabbi David Raphael Banon.

His funeral was attended by many rabbonim and shluchim including the Chief Rabbi Shlomo Moshe Amar, and Rabbi of Yavne Rabbi David Abuhatzira, both former students of Rabbi Eidelman in Morocco.

Rabbi Amar delivered a moving eulogy praising Rabbi Eidelman for his mesirus nefesh to fellow Jews, and devotion to the Rebbe.

Both the Zaka volunteers and the participants at the levaya were amazed to see that despite the passage of time, the body of Rabbi Eidelman was complete, as if he had just passed away recently. “If one didn’t know who the levaya was for, one would have thought that the niftar was one who had just passed away yesterday or the day before,” Shneur Zalman Berger, author of the authoritative book on Chabad in Morocco, told Anash.org.