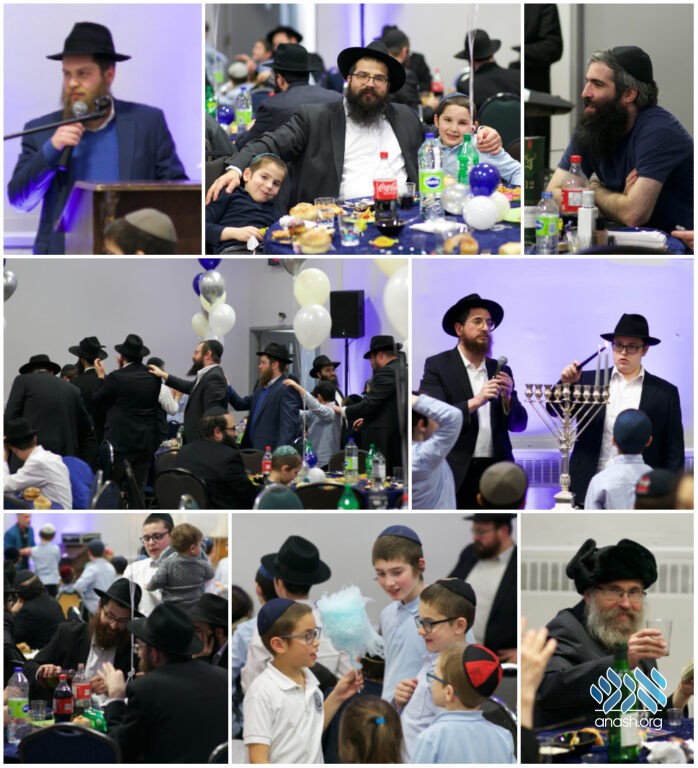 Over 200 staff members and their families gathered at Yeshiva Tomchei Temimim Lubavitch in Montreal for a Chanukah party, celebrating the Rebbe’s shlichus in chinuch.

As MC for the event and as one of the evening’s organizers, Rabbi Moshe Cohen, the Yeshiva’s Director of Development, pointed out that Chanukah is rooted in the word chinuch and Rabbi Mordechai Wenger, from the Yeshiva’s Vaad Haruchni, delivered a dvar Torah along with some divrei chizuk, followed by a menorah lighting by talmid Levi Menkes.

A special children’s program was led by Rabbi Nochum Greenwald, who told an uplifting and entertaining story before calling up talmidim for the 12 pesukim. The children’s program ended with a special magic show by the Amazing Todsky.

Mr. Aaron Spiro and Mr. Simi Wenger, Hanholah members and co-organizers of the event, distributed gifts to the staff, their spouses, and children. Mr. Spiro addressed the crowd, expressing the great sense of gratitude and deep appreciation that everyone has for the hard work that each staff member invests in their avodas hakodesh, day in and day out.

Each man received a gift certificate for a free hat at Bellissimo Custom Hats, valued at $270 USD, and each woman (wife of staff member), received a portable bluetooth speaker, as well as cosmetics. Every child received an envelope with a crisp $5 bill for Chanukah gelt. At the end of the program, the staff sat down for a chassidishe farbrengen, in the atmosphere of Ish es re’ayhu ya’azoru ule’ochiv yomar chazak.

We would like to thank our generous gift sponsors, Levi and Yossi Chayo from Bellissimo Custom Hats, for offering the hats at 50% off. We wish them much mazal for their new showroom which will open at the end of the month in Montreal. We also give a special thank you to Mendel Boyarsky for sponsoring the speakers and cosmetics.

In addition, special Chanukha gelt was given to each talmid by an anonymous donor and former talmid and friend of the yeshiva.

This year Yeshivas Tomchei Temimim of Montreal is celebrating 80 years. Spearheaded by a generous gift from Mr. & Mrs. Norm & Edith Gordon, the Yeshiva has invested over two million dollars in upgrading the current building with the goal of improving the quality of education and ensuring that all talmidim grow up to be true Chasidim, Yirei Shomayim and Lamdanim who give the Rebbe much nachas!