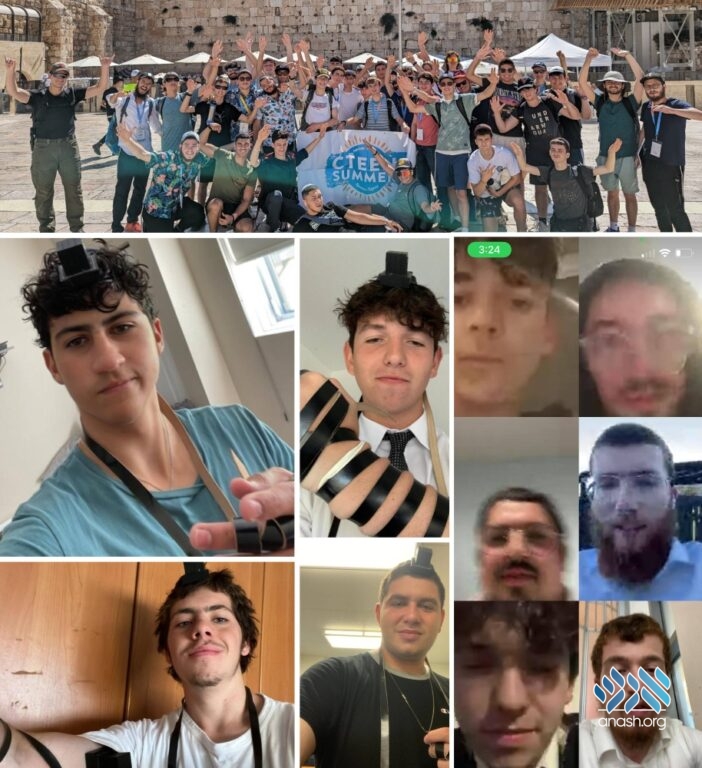 Summer may be long gone, but participants of this year’s CTeen Summer trips are still basking in its warmth. It’s months later and high school students around the world are reaching thousands of mitzvos.

Summer may be long gone, but participants of this year’s CTeen Summer trips are still basking in its warmth. It’s months later and tens of young men are still wrapping tefillin, dozens of young women recite the evening Shema and many utilize their afternoons to study Torah.

“Tremendous work and investment go into preparing for a successful summer,” shares Rabbi Nachman Rivkin, director of CTeen Summer, “but what is less well-known is our efforts in the arena of post-trip engagement. We’re constantly looking for ways to keep the teens connected.”

The summer of 2022 was CTeen’s largest. Hundreds of teenagers divided their time between CTeen Xtreme in the American west, Heritage Quest—a three-week trip to Poland and Israel, and Israel Journey—an immersive twenty-two-day journey through the Holy Land. The teens enjoyed, made friends, discovered their roots and experienced Torah-true Judaism. And then they landed.

“Teenagers the world over return from the trips inspired, ready to commit to a mitzvah or two. But then reality kicks in. How to stay motivated?” asks Rabbi Mendy Kotlarsky, Executive Director of Merkos 302 and Vice Chairman of CTeen International. “We developed the year-round branch of CTeen Summer to address exactly this purpose. Our goal is to continue feeding that spark of Judaism and fanning it to a flame.”

“Throughout the year, we proactively build on the energy and excitement of all our trips,” explains Program Coordinator Mendy Lepkivker. He points to the monthly (and for some groups: bi-monthly) farbrengens, care packages and the mitzvah challenges. “Counselors are constantly in touch with teenagers through our Whatsapp groups and zoom meetups, but the structured programming is what gives them the real Jewish boost.”

In Elul, CTeen Summer hosted a mass virtual farbrengen with Rabbi Menachem Traxler, director of Pantry Packers in Israel. Rabbi Traxler engaged the teenagers with a presentation showcasing the effects of tzedakah in the Holy Land. Post farbrengen, numerous high school students pledged to give charity, daily, for the following month.

Before Tishrei, every CTeen Summer participant received holiday swag: their very own CTeen-themed machzor. The Tishrei farbrengens, divided into smaller, intimate groups, were dedicated to teaching teens how to daven on Rosh Hashanah and Yom Kippur.

But perhaps most interesting was the ‘Coffee with Counselors’—the Cheshvan event. Campers and counselors were provided gift cards to their local coffee shop(s) where they met up virtually, to reconnect and reinvigorate.

But, although the programs keep the teens engaged, oftentimes, the high school students take their own initiative. “We find that the most inspiring,” shares Mendy Lepkivker, “Immediately after the summer trips, campers posted tefillin selfies of themselves on our Whatsapp groups. And then, they began nominating their friends to do the same. The Tefillin Challenge continues until this day.”

One of the initiators of the Tefillin Challenge was Jared Cohen, a fifteen-year-old freshman from Sudbury, MA. Although his experience on CTeen’s Heritage Quest ended this August, Jared pledged to continue wearing tefillin. At the time, his younger brother Alex was studying for his Bar Mitzvah with the local Chabad Rabbi, Rabbi Yisrael Freeman.

At Alex’s Bar Mitzvah this autumn, the thirteen-year-old described his older brother as his inspiration for Judaism, teaching him what it means to live a Jewish life. Alex also pledged to begin trying tefillin. “And the boys’ father approached me as well, saying, ‘I need you to get me some tefillin. If my sons are doing it, I’d like to join them,” shares Rabbi Freeman, “It’s obvious to me that Jared’s tefillin were the impetus for the rest of his family—CTeen Summer is a force that continues, not only during the trip itself, but year-round.”

In Manchester, United Kingdom, seventeen-year-old Michael Burg was invited to Rabbi Sholom Cohen’s house for a meetup after returning from the UK Israel Journey. “I offered to help him put on tefillin. He says to me, ‘Rabbi, no need, since CTeen, I’ve been davening and wrapping tefillin every morning.”

“We have a Whatsapp group called ‘Tefillin Boys,’” shares Evan Jamron, who joined the Israel Journey trip from Harrisburg, PA, “Every day, we alumni post photos of ourselves with tefillin. My inspiration for continuing to put tefillin on daily was the trip to Israel—I discovered so much about my history. I remember thinking: Look how much we Jewish people have been through and the faith we maintained despite all that! Today, I put on tefillin to connect to that part of me.”

As an unexpected bonus, Evan, Michael, Jared, and dozens of other young men all received luxury backpacks as a reward for consistently laying tefillin. Twenty-one-year-old CTeen alum-turned-entrepreneur Matias Lancewicki was once a CTeen leader in Hallandale, FL and now a student in Yeshiva and CEO of Ezri USA. When Matias heard about the “Tefillin Boys,” he was inspired to give back and help the teens make Tefillin a part of their life. He coordinated with CTeen Summer to gift each dedicated teen one of his luxury “EZRI” backpacks.

“I wanted the teens to realize how, once it becomes part of their routine, tefillin can be an easy mitzvah. We gave them thirty days. I was surprised by how many teenagers actually participated—and especially those that continued putting on tefillin, long after the challenge was over,” says Lancewicki.

While the tefillin marathon was off and running in the boys’ divisions, the young women of CTeen Summer took on their own mitzvah challenge. An entire group of girls from the Israel Journey Departure #3 tasked themselves with fulfilling a personal mitzvah for the entirety of a month. Some chose to say Modeh Ani in the mornings, others to light Shabbat candles, while a group of sophomores committed to the evening Shema. “The personal mitzvah challenge was optional, yet every single teen succeeded,” says program coordinator Mrs. Sarah Sherman.

As program coordinator, Sherman is also involved with the CTeen Summer Ambassadors program. Per every trip, one exemplary teenager is chosen by their group leader to be its post-trip ambassador. That teenager receives leadership training, connects with leaders of CTeen chapters and becomes the face of the trip. Once a month, on a scheduled Live on CTeen’s instagram account, a different ambassador is chosen to discuss their experience. Hundreds of teens watch, ask questions and learn together. The result is an interactive, connecting experience.

“First and foremost,” shares Sherman, “We want our teens to connect to their local CTeen chapter and retain their sense of Jewish pride. That’s our goal with all of our post-summer engagement programming. Second, we want to keep them engaged as alumni and connected to the lessons and friendships they have cultivated during and after the trip.”

Sherman describes the partnership with CTeen Summer and Chabad on Campus. Once seniors have chosen their respective colleges or universities, CTeen Summer connects them with the Shluchim on campus. “We introduce Chabad on Campus to our alumni, who receive a care package from them and together, we connect them to their campus shliach. This way a connection has already been made even before their arrival on campus and the results have been phenomenal.”

In today’s “connected yet disconnected” world, many teens are suffering from emotional challenges such as loneliness and depression. In addition to inspiring teens to express their Jewishness, the CTeen summer trips have empowered them emotionally and socially. Marlene Gindi, a mother from Liverpool, UK, shared her story. Once a jolly teenager, her fifteen-year-old son Joseph had become depressed and withdrawn just a few months before the summer. Post his Israel Journey trip, Marlene shares, “I got my son back.”

CTeen Summer’s effect is cohesive. It gives teenagers the ability to connect in a world that embraces disconnect. It imbues them with a happy spirit, warm and loving friendships and clarity about moving forward as proud Jews.

And so, while summer is long gone, the hundreds of participants of CTeen Summer are still actively involved in connecting with each other, increasing in mitzvos and living the lives of Jewish teenagers around the world.