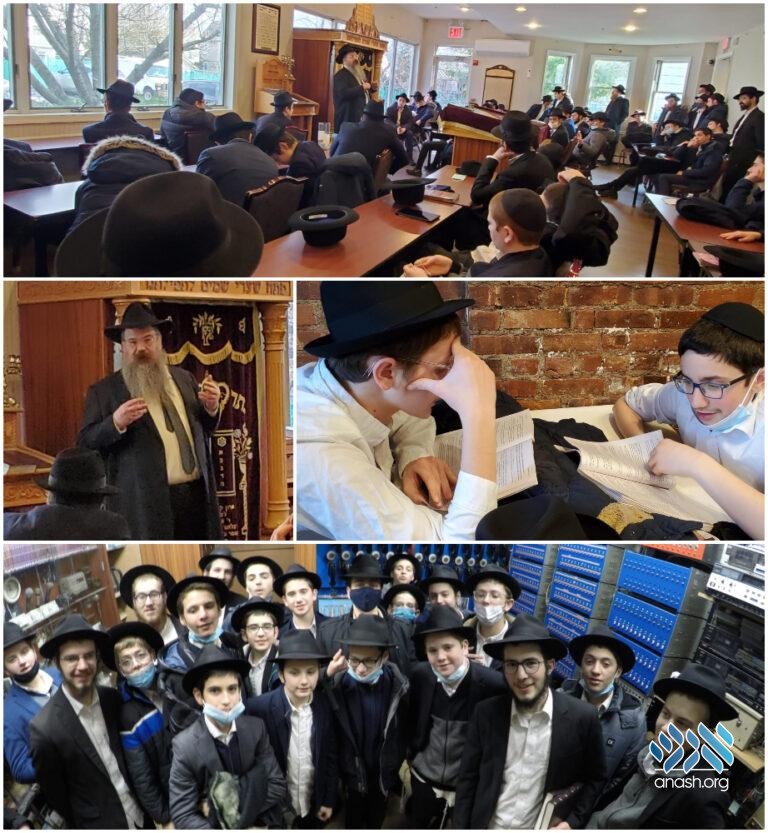 A month-long preparation for Yud Shevat in Monsey Mesivta culminated in a full weekend trip to Crown Heights, with farbrengens, learning and visits to 770 and the Ohel.

A month-long preparation for Yud Shevat in Monsey Mesivta culminated in a full weekend trip to Crown Heights, with farbrengens, learning and visits to 770 and the Ohel.

For over four weeks, the Monsey Mesivta, headed by menahel Rabbi Sender Lustig, prepared for Yud Shevat, the 70th anniversary of the Rebbe accepting the nesius.

Next stop for the boys was the Rebbe’s Ohel. They then continued on to Crown Heights, and headed to 770, where they had the opportunity to enter the Rebbe’s room, opened specially for the group. The boys then were given a tour of the WLCC room, followed by davening mincha in 770.

For the rest of the day, the hanhala had rented out one of the Shuls in Crown Heights, where the boys gathered to learn and eat.

Friday began with a presentation on Yud Shevat throughout the year, presented by mashpia Rabbi Moshe Browd. For Shabbos, the yeshiva headed back to Monsey, where they spent the day davening, learning and farbrenging. A grand farbrengen took place Motzei Shabbos with Rabbi Aaron Dovid Gancz.

“This year was special in the fact that Yud Shevat was on Shabbos, so it was all felt over four days instead of just one,” Rabbi Levi Tiechtel, a mashpia in the Yeshiva, told Anash.org. “This allowed for so many more experiences than those of a regular year, and the bochurim came out of Yud Shvat energized and inspired to continue learning.”