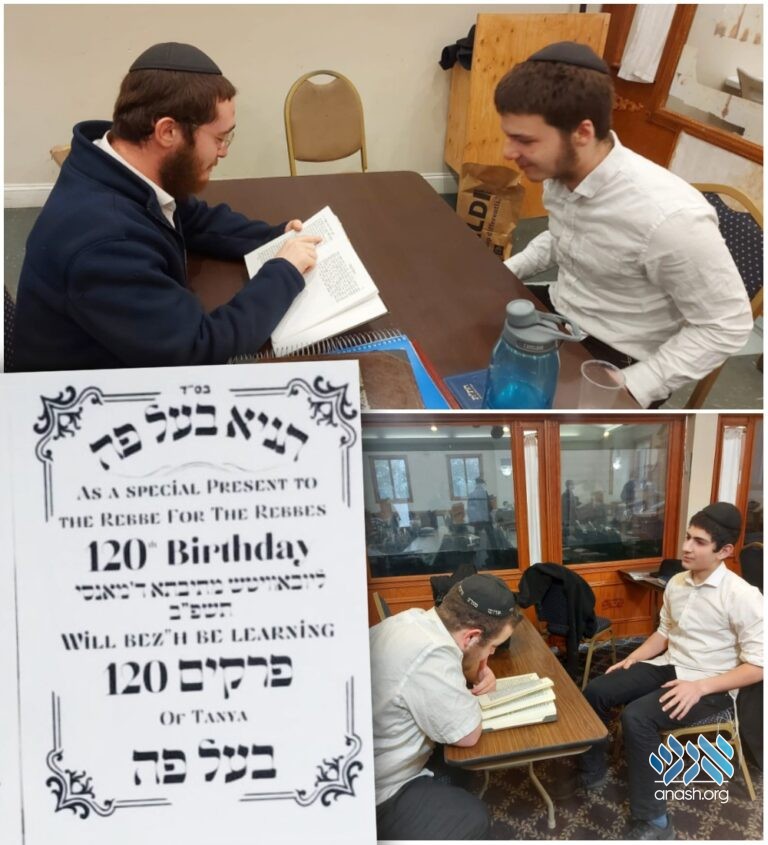 Knowing the nachas the Rebbe had when bochurim learned Torah Baal Peh, students in Mesivta Lubavitch of Monsey undertook to collectively memorize 120 perakim of Tanya as a gift to the Rebbe.

For months, bochurim in Mesivta Lubavitch of Monsey, headed by menahel ruchni Rabbi Sender Lustig, have been preparing themselves for Yud Alef Nissan, the Rebbe’s 120th birthday.

As the special day approaches, the bochurim decided that they wanted to do something, in addition to their other preparations, as a special gift to the Rebbe.

Knowing the nachas the Rebbe had when bochurim learned Torah Baal Peh, they undertook at a recent farbrengen to collectively learn at least 120 perakim of Tanya by heart.

“This grassroots initiative had taken the yeshiva by storm,” Rabbi Levi Tiechtel, a mashpia in the Yeshiva, told Anash.org. “Many bochurim of all ages and hanhalah members have committed to learning perakim. There’s a lot of excitement in the air.”

70 chapters of Tanya have already been pledged towards the ambitious goal of 120 perakim. The yeshiva administration has stepped up to encourage the bochurim in their hachalta by providing monetary rewards to those who memorize an amud or a perek.

“We’re very excited about this initiative,” said Rabbi Teichtel. “We are sure it will bring a lot of nachas to the Rebbe.”