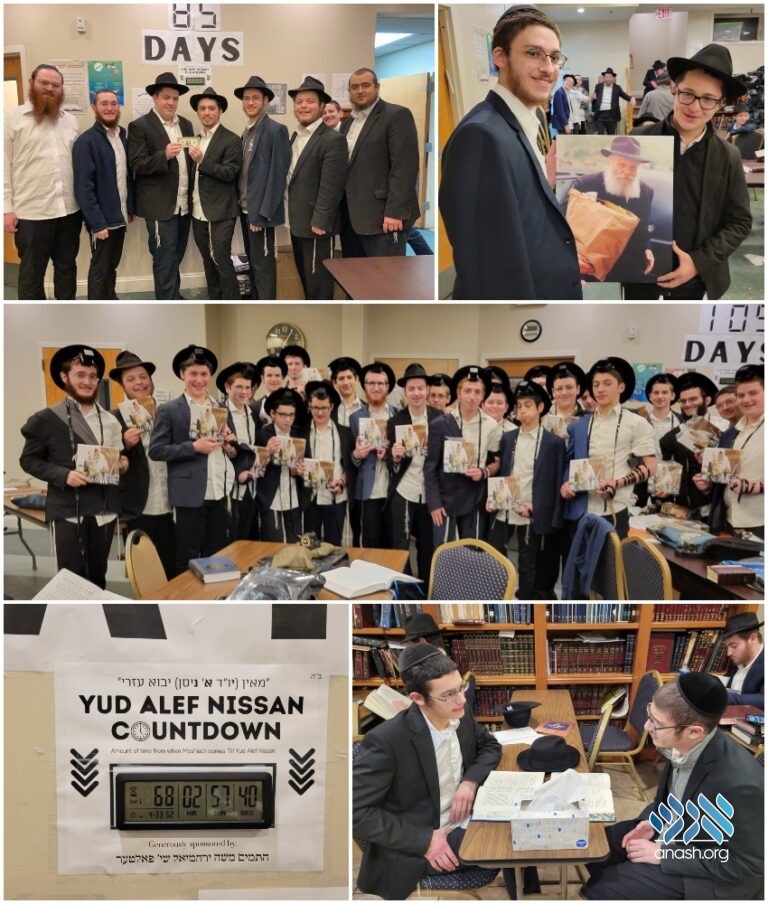 For the past four months, bochurim in Mesivta Lubavitch of Monsey, headed by menahel ruchni Rabbi Sender Lustig, are prepared themselves for the auspicious day of Yud Alef Nissan, the Rebbe’s 120th birthday.

For the past four months, bochurim in Mesivta Lubavitch of Monsey, headed by menahel ruchni Rabbi Sender Lustig, are prepared themselves for the auspicious day of Yud Alef Nissan, the Rebbe’s 120th birthday.

Beginning on Yud Alef Cheshvan, the Yeshiva’s shluchim announced a comprehensive 4-part mivtza that has bochurim coming on time to seder, learning extra during and out of seder and other other preparations for Yud Alef Nissan. The bochurim also accepted to increase in darkei Hachassidus, including learning Sichos and strengthening their hiskashrus.

Six weeks into the mivtza, during a Yud Tes Kislev Farbrengen, the bochurim on their own initiative decided to take upon themselves to learn every day for an extra half hour outside of seder time. So far, the extra learning has continued strongly for months without stopping!

A month later, on Yud Alef Teves, exactly four months before the Rebbe’s birthday, a grand farbrengen was held in yeshiva with Chicago Shliach Rabbi Binyomin Scheiman. Flown in especially to farbreng, Rabbi Scheiman spoke to the bochurim about the significance of Yud Alef Nissan, and how important the day is in the life of a chossid.

As the calendar near Yud Alef Nissan, the bochurim also erected a large countdown clock on the wall of the main hallway to remind themselves of the days, hours, and minutes remaining until the auspicious day.

“The preparations for Yud Alef Nissan can be felt throughout the entire yeshiva, giving a new flavor to the everyday davening and learning,” Rabbi Levi Tiechtel, a mashpia in the Yeshiva, told Anash.org.