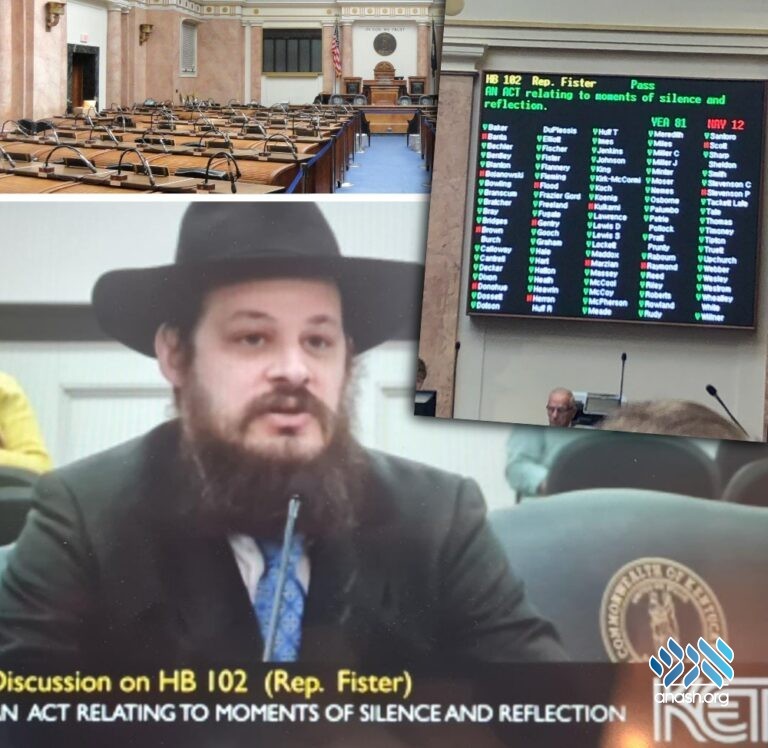 A bill that would require a Moment of Silence in Kentucky schools, giving students the chance to silently pray, meditate or reflect in class, passed the Kentucky House of Representatives this week thanks to the efforts of local shluchim.

A bill that would require a Moment of Silence in Kentucky schools, giving students the chance to silently pray, meditate or reflect in class, passed the Kentucky House of Representatives this week.

Enacting a Moment of Silence in public schools was strongly encouraged by the Rebbe, who began discussing the “Moment of Silence” by name in 1983. The Rebbe explained that the time at the beginning of each day allowed the students to reflect that there is ‘an Eye that sees and Ear that hears’, instilling faith in the Creator and Ruler of the world.

Currently, a Moment of Silence is either permitted or mandated in 35 states; the shluchim in Kentucky, spearheaded by Lexington, Kentucky Shliach Rabbi Shlomo Litvin, are working to mandate it in their state as well.

The bill received initial approval this week, with the legislation approved by the Kentucky House Education Committee with a 16-4 vote. On Wednesday, it passed in the Kentucky House ina 81-12 vote. On Thursday, the bill was introduced to the Kentucky Senate, along with a proclamation honoring the Rebbe, and will be heard by the Senate education committee on Monday.

Rabbi Litvin testified in favor of the bill. Litvin said students need “a basis for healthy minds, healthy backgrounds to be able to study.” State Rep. Killian Timoney, R-Lexington, voted for the bill. He said he knew of several schools that have a “moment of mindfulness” and that it creates a healthy school environment.

“The Rebbe taught that an education shouldn’t just be about math and science, but morals and values. The law helps create that environment, while ensuring that instruction come from parents and not teachers,” Rabbi Litvin told Anash.org.