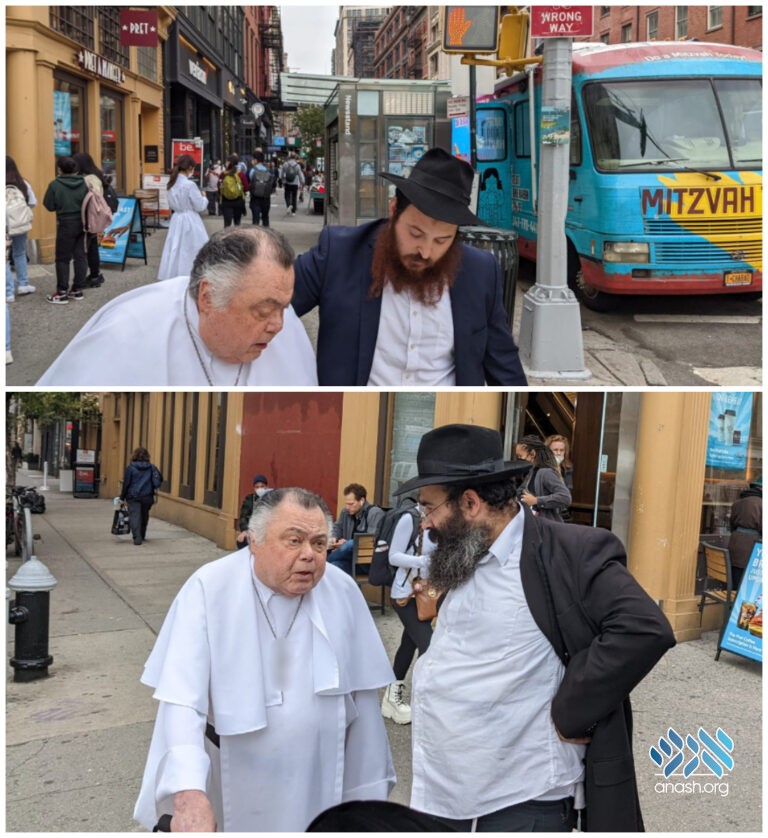 Rabbi Yosef Kratz, caretaker of 770, and Rabbi Yehuda Pevzner, Crown Heights Mivtza Tank coordinator, parked their Mitzva Tank at a busy intersection and began their usual routine of asking passers-by if they were Jewish and if they would like to do a mitzvah.

Then an elderly man approached, and things started getting interesting.

“The truth is that when we asked him if he was Jewish, we were sort of joking. Why would we ask a priest, dressed in long flowing white robes, with a huge cross dangling across his chest, if he was Jewish?” Rabbi Kratz told Anash.org.

But he replied in the affirmative.

“What do you mean? Was your mother Jewish?”

He answered, “Both my parents were Jews.”

The elderly man explained that as a child, his parents handed him over to a church to survive the Nazi onslaught, and he survived the Holocaust living in the church. Following the war, he began studying to be a pastor r”l. In his school, he was constantly bullied and when he complained to his teacher, a pastor who was also born a Jew, the teacher told him that a Jew will always be persecuted…until he becomes a successful pastor. Which he did. He lived in Pakistan and was a priest there until 15 years ago when he moved to New York.

“Why don’t you come to synagogue?” Rabbi Kratz asked the man.

He wasn’t sure, “Is a priest allowed to come?”

“I work for the Lubavitcher central synagogue in Crown Heights, and I invite you to come.”

He asked for a business card, and said he would keep in touch. Seeing he needed help, the two Lubavitchers helped him get a cab and gave him a chair to sit on until the taxi arrived. After all, the man is an almost 90-year-old Jew…

“I talked to him about speaking to people about the Holocaust. He demurred, saying that we have to pray that it will never happen again. I encouraged him to speak to the young people about it, thus ensuring that it won’t happen again,” Rabbi Kratz said.

Before leaving, the elderly man, who until recently had no visible connection to Yiddishkeit, said he would stay in touch, and try to visit 770. “Make sure to prepare some gefilte fish and kugel for me,” he told them. “Or at least some chopped liver.”

Even after decades of living as a priest in foreign lands, his Jewish spark was not extinguished. It flickered deep inside and a short encounter with a fellow Jew caused it to burst aflame.