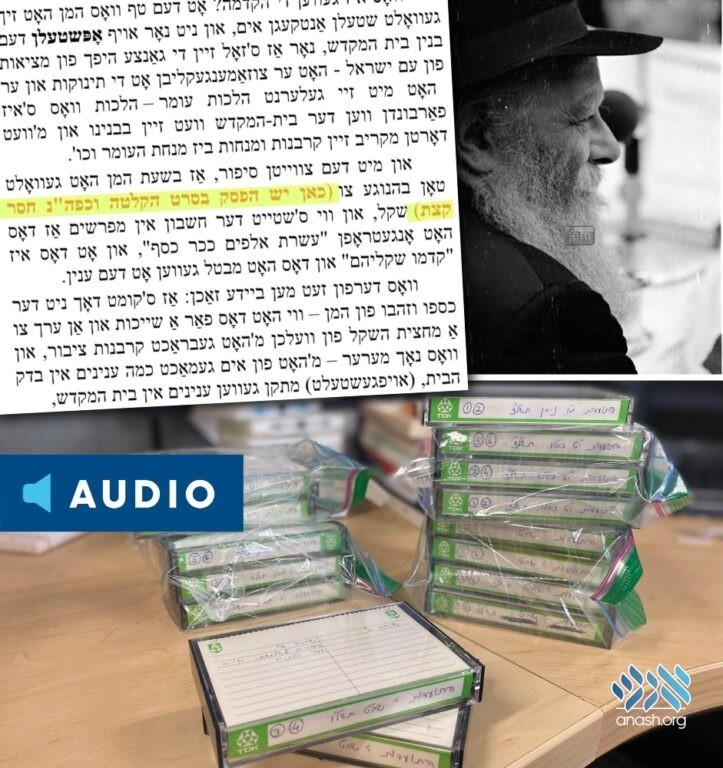 For years, an audio clip was missing from the Rebbe’s farbrengen of 5736, where he convened 72 rabbonim to counteract the United Nations. It was just recently discovered.

In recent weeks, staff at JEM received a call from Rabbi Chaim Shaul Brook of Lahak Hanachos. Efforts to transcribe the Farbrengen of Yud Shevat 5736 ran into an issue when it was discovered that the tape of the Farbrengen was missing a few words in the middle of a Sicha. Does JEM have the missing tape?

A search of the audio archives at JEM, including a newly acquired audio collection, uncovered the missing piece. Mrs. Chana Kievman, with the assistance of her son Rabbi Avremi Kievman, recently transferred to JEM a personal collection of recordings of the Farbrengens in the 1970s as broadcast on the radio at the time. This version of the Farbrengen, only discovered in recent weeks, includes the few short but priceless seconds missing on other versions and completes the picture of a historic moment with the Rebbe.

In January 1976, the United Nations recognized the PLO as a member of the UN Security Council, granting them the right to pass resolutions against Eretz Yisrael. At the Yud Shevat Farbrengen of that same month, the Rebbe decried this recent development and explained that when a Jew is made aware of happenings in the world around him he must turn to Torah to seek out the appropriate response.

At the conclusion of the Sicha, in an unprecedented scene, the Rebbe called upon Rabbis present in the crowd to ascend the Farbrengen platform and address the crowd, using the Rebbe’s own microphone. By issuing a Psak Din in favor of Eretz Yisrael, their own “resolution”, they would preempt the negative resolution of the United Nations. The names of 72 Rabonim present were written down at the Rebbe’s request to counter the 72 nations of the world who stand against Eretz Yisrael.

Learn the Sicha in this week’s Lahak booklet

Watch an excerpt of this farbrengen on Jem.tv by clicking here.

If you or someone you know has access to audio, video or pictures of the Rebbe not yet available to the public, please email [email protected]