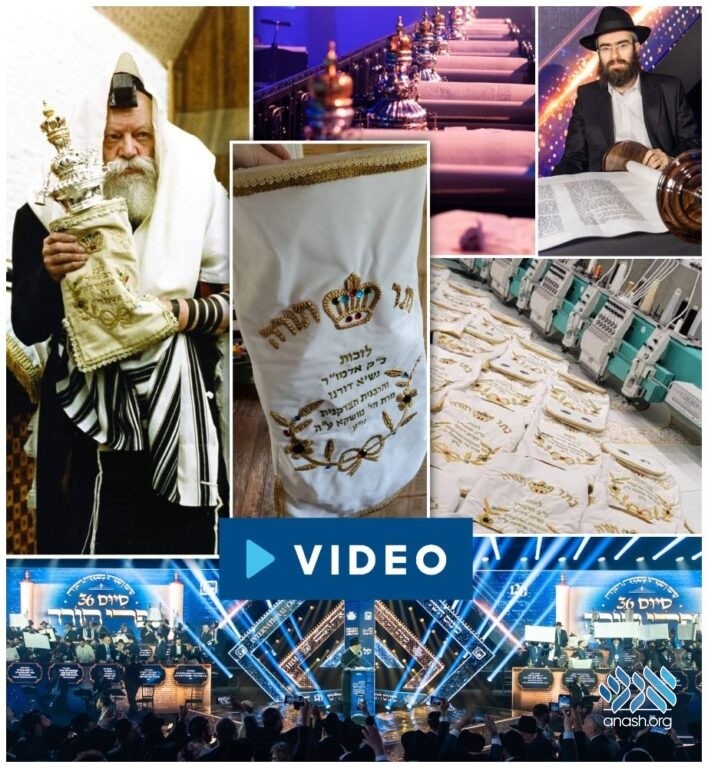 What seemed like a smooth and flawless event at the Kinus Banquet was in fact an international effort that almost fell through, if not for a series of miracles. Read about the incredible story behind the 36 Torahs.

What seemed like a smooth and flawless event at the Kinus Banquet was in fact an international effort that almost fell through if not for a series of miracles. In a conversation with Anash.org, Rabbi Yitzchok Raskin of Machon Stam shared the miracles that made that historic siyum possible.

“Before last year’s Kinus, Rabbi Moshe Kotlarsky approached me with the idea to complete 36 Torahs for Yud Alef Nissan of 5783 to honor the Rebbe. The request, although monumental, seemed doable. I told Rabbi Kotlarsky that I would try, and with Hashem’s help, it would get done.

“The project was progressing on schedule to be finished on time for Yud Alef Nissan when Rabbi Kotlarsky asked if the deadline could be moved up to Rosh Chodesh Kislev for 5783 Kinus. I told Rabbi Kotlarsky that it would be very difficult to get it done by that date, but we would do the best we can.

“Throughout the year, Rabbi Kotlasky asked for regular updates on the sifrei Torah to ensure they would be ready in time. I reached out to many sofrim and was trying to get more and more to help work on this massive project. I even ordered a few extra Torahs as backup, in case the other ones weren’t ready in time.

“Even just two weeks before the siyum, I still wasn’t sure that it would all come together. My project manager in Eretz Yisroel told me, ‘Hashem is on your side. There are so many things that could have gone wrong with this project, that didn’t.’ But even with everything progressing positively, it was still not certain that they would be ready in time.

“As with any Sefer Torah, hundreds of hours go into the writing and checking of the scrolls. Especially in this scenario, where the Torahs were being sent to shluchim who live in far-flung places with no sofrim nearby, it was necessary to give them extra attention in advance.

“As the kinus loomed closer, Rabbi Kotlarsky discussed with me some ideas for the mantalach, the Torah covers. He decided to go with a mantel that closely resembled that of the Rebbe’s Torah. But this was no small undertaking. We had just two weeks to find someone to create 36 hand-embroidered mantalach with a unique design (the particular design cannot be done by a machine).

“Rabbi Kotlarsky insisted that, ‘If there’s a will there’s a way’ and I was finally able to find a factory in India that could complete all of the mantalach in such a short period of time.

“In the interim, we worked with a specialty designer to replicate the rebbes mantle. We had to create the design from scratch and pay close attention to detail to replicate everything down to the color of the beads.

“The embroiderer from India warned that the mantalach would only be ready right before the kinus. I told him that once it was ready, they should let me know and I would find someone to hand deliver it from India. Time was too tight even for express shipping since it could get delayed in customs.

“On Wednesday morning, just as the Kinus Hashluchim 5783 was about to launch in Crown Heights, I was notified that the mantalach in India were ready. I immediately contacted Mumbai shliach, Rabbi Yisroel Kozlovsky, asking if he could bring them when he flew in for the kinus. There was just one major problem: Mumbai is a 2-hour plane flight from Delhi where the mantalach where located. In an amazing hashgacha protis, Rabbi Kozlovsky told me that he was actually on his way to Delhi and would be there in just a few hours!”

Rabbi Kozlovsky shared, “I was really frustrated at the time since I had wanted to fly straight from Mumbai to New York. But I had issues with my visa and was forced to take care of it in Delhi. When Rabbi Raskin called me, I realized the incredible hashgacha protis. I was needed there to bring the mantalach to the Kinus.”

But it wasn’t all done. The mantalach needed to be given to be delivered to Rabbi Kozlovsky at the Delhi airport, where he would pick them up on his way out. However, the embroidering company sent them to shipping at the airport and it was already in customs. Great efforts were needed to extract the items from customs, and Rabbi Kozlovsky had to push off his flight to the next day.

At last, mantalach in hand, Rabbi Kozlovsky landed at JFK airport at 7 am on Friday morning. They had done it, the 36 sifrei Torah, with mantalach hand embroidered to look just like the Rebbe’s, would be welcomed at the Kinus Banquet and sent to their new homes with shluchim from around the world.

VIDEO: The rejoicing as the 36 Torahs were completed at the Kinus Banquet