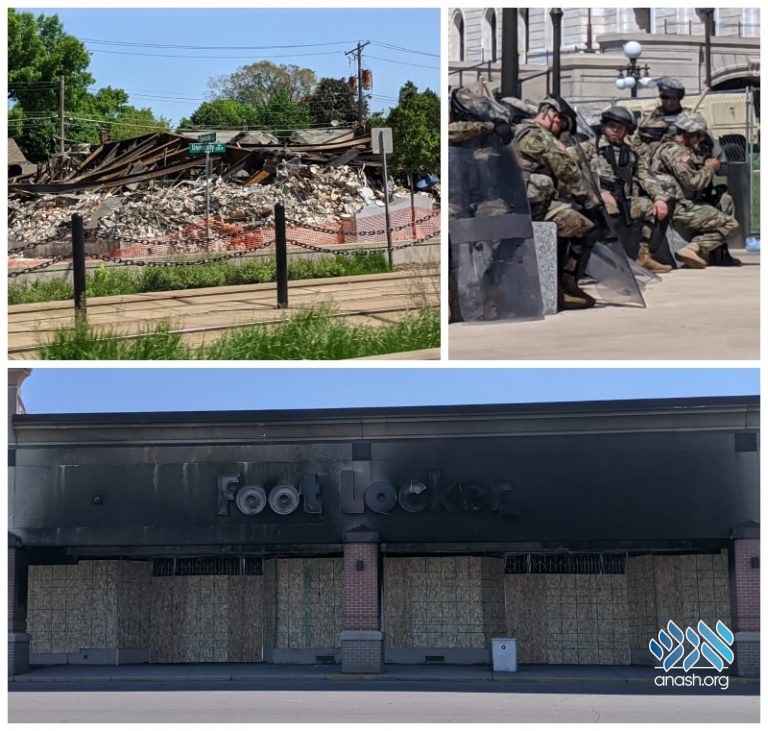 As ‘Justice for George Floyd’ protests descend into riots and widespread looting, shluchim and Lubavitchers in Minnesota tell Anash.org that they are “staying home and are safe.”

As the state of Minnesota is being rocked by protests following the death of George Floyd at the hands of a police officer, shluchim and members of the Lubavitch community say that they are safe at home.

The protests began a few days before Shavuos and spread from Minnesota to cities across the country, including New York, Atlanta and Los Angeles. Some protests have turned into riots and clashes with police, leaving stores in flames and torched cars in the streets. City officials ordered overnight curfews to quell the violence.

In the Twin Citites, Minnesota, over 170 businesses were damaged, some looted and torched, others sustaining minor damage. Hundreds of stores across the two cities are boarded up, and the National Guard was called in to quell further violence.

The Lubavitch community in S. Paul was largely unaffected, with the protests taken place far from the community center. However shluchim in the area and the Litvishe community were both close to the center of the protests.

“The situation is scary,” Rabbi Yitzi Steiner, shliach to UofM, told Anash.org. “Within a close distance to the Chabad house, there are numerous burnt and looted stores. On Friday night, our family was woken up at 1:00 am by thousands of protesters marching down the street of the Chabad house. But we are safe, and there is no real threat of the violence occurring in our area.”

One community member in S. Paul said they “kept hearing sirens over Yom Tov, but did not see any signs of the rioters.”

“We heard that a curfew was announced from a non-Jewish neighbor, but did not see any unusual activity on our streets” he said.