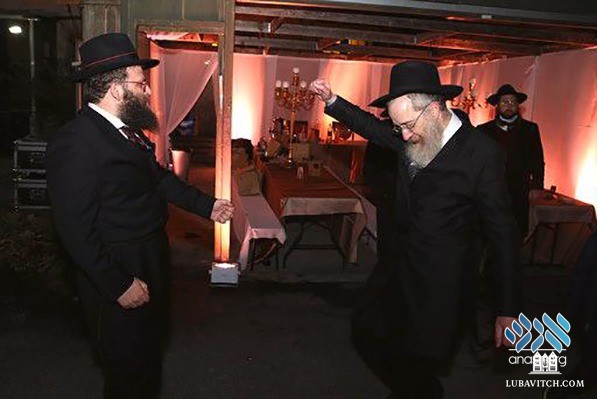 As minimalist simchos are celebrated by couples around the globe, the question of the necessity of large weddings has resurfaced. What is the Rebbe’s opinion on the matter?

The minimalist simchos being celebrated by couples around the globe during the coronavirus lockdown have raised once again the topic of wedding expenditure and the price that we pay for it. In many communities, discussions are under way on how to minimize spending and limit the social pressure for more expensive simchos after the coronavirus passes.

In a recent interview with Kfar Chabad magazine, Harav Yehuda Yeruslavsky, rov of Nachlas Har Chabad and member of Beis Din Rabbonei Chabad, discussed the issue and shared directives he received from the Rebbe on the matter:

The year was 5742/1982 and the Chabad Beis Din for all of Anash in Eretz Yisroel had just been established. One of our first initiatives was to set takanos, fixed rules, on spending at simchos. A proposal was drawn up and I sent it to the Rebbe.

In the response, the Rebbe wrote to me (free translation):

“Regarding establishing takanos for simchos – one should not begin activities with prohibitions, especially with limitations in the joy of the chosson and kalla!

“Once the vaad arranges rabbonim in suitable positions and other positive accomplishments, should you consider establishing prohibitions.”

There were some who tried to interpret the Rebbe’s words as being opposed to limiting expenditure at chassunos. But that’s not what the Rebbe said. The Rebbe was simply saying that we should not begin our rabbonus with imposed rules.

To help clarify the Rebbe’s approach, we bring you a collection of directives the Rebbe gave. In it, we see a clear distinction between rules and prohibitions, which the Rebbe was reluctant to impose, to a proper and healthy attitude, which the Rebbe made efforts to convey:

The Tumult of Trivialities Leads to a Lack of Tranquility

“Chazal say that the possuk “walk humbly before Hashem” refers to the kallah going to the chuppah. This could be understood to mean that, although chassunah spending is necessary and indeed a mitzvah, it must be done in a humble manner.

“The tumult and hype that is made of trivial matters leads to turmoil and a lack of tranquility, and is therefore not a good thing. This is perhaps one of the fundamental reasons for the various enactments by Gedolei Yisroel to lessen the wedding expenses. Besides, “the Torah has compassion on the money of yidden,” and we find certain standards made by Chaz”al “not to embarrass those who cannot afford.”

“Lubavitch never embraced the notion of “decrees,” but for the benefit of chosson and kallah, it would be very worthwhile to reduce expenses, especially those of sheer extravagance.”

A Conversation with Reb Nissan

On numerous occasions, the Rebbe expressed his disapproval of the extravagant spending at Anash simchas. During a fascinating yechidus with the mashpia Reb Nissan Nemenov, in 5719 (1959), the Rebbe bemoaned the character of American simchas and asked him to publicize it:

“I am unhappy with the lifestyle of chassidim in America… A chassunah used to be a small, warm affair, where everyone would contribute, by making some food, and so everyone felt they were part of the simcha. Here, however, the chassunah must be held in a hall, which also adds financial strain on the host.

“Then there is the pressure on the guests to bring a gift, which puts pressure on the  friend who cannot afford one to either go without a gift or to borrow the money. Even if a chossid is willing to swallow his pride and come without a gift, his wife will not hear of it. And so he’s pulled into debt…

“Finally, there is the seating plan. Here, the host must seat everyone according to their social status, without offending anyone. This also adds extra strain on the host. One could well imagine what kind of chassidishe farbrengen could take place in such a setting…

The Rebbe raised the challenge of putting an end to this custom.  “It is difficult for me to tell any one individual not to act in such a manner, for one cannot tell a person, ‘You be the odd one out.’ Yet, this conduct extends even to such trivial matters as paying extravagant sums for decorations…”

In the winter of 5739 (1979), one of Anash reported to the Rebbe that he would make the vort for his child in the appropriate manner.  The Rebbe replied in a short note [emphasis in the original], “This is contrary to the recent custom of Anash to waste money just to outdo their neighbor, and however vain (“pust”) the neighbor is, the yetzer hara incites them to go into debt just to show that they can be even more vain…”

In another handwritten note the Rebbe wrote, “There is absolutely no sense in squandering money on wedding expenses. If only you can demonstrate to other young Anash that a chassidishe wedding consists of abundance in spiritual matters. Precious Yiddishe money should not be utilized to demonstrate that you had nicer flowers than others, and the same for other similar things…”

It Could Support a Class for Six Months

During the early 5720’s, the Rebbe wrote a note to someone, bemoaning the costly chasssunos:

“You are correct in opposing the new chassunah ‘minhogim’ that our fathers did not imagine. The cost is a waste of yiddishe money. Moreover, even if it would be free of charge, many accepted practices are inappropriate. The trend has become to make the central aspects into minor features, and the undesirable has become the focal point…

“Do I have to partake in these ceremonies? And so it will be documented in an album, for the gossipers to discuss the chassunah’s cost? The expenses of one chassunah could cover the cost of a large class in a yeshiva in Morocco for more than six months…”

This note quickly made waves among Anash. One bochur was prepared to make his chassunah in a shul, with a meal of bread and herring, forgoing the hot meal. In a letter dated 20 Teves, 5721, Reb Berel Baumgarten asked the Rebbe on this bochur’s behalf if this is what the Rebbe wants. The Rebbe answered that he obviously does not oppose a hot meal…

During this period, Reb Uriel Tzimmer requested that the Rebbe be mesader kiddushin for the chassunah of Reb Pinyeh Korf.  The Rebbe replied that he had stopped being mesader kiddushin since he was unhappy about the extravagant spending for a photographer at the chassunahs. The Rebbe said, “With that amount of money it is possible to support a class in the cheder in Morocco for six months.” When the chosson heard this, he hurried to send off the money to the Rebbe’s shliach in Morocco…

Minimizing the Expenses Increases the Joy

Unfortunately, there are many who truly believe that by cutting down on expenses, the simcha will be lessened. The Rebbe addressed this notion, saying, “He is preoccupied to get flowers and color pictures for his chassunah so that he is no different than everyone else. At the first chassunah ever, that of Odom Harishon, there were no pictures, and yet it went successfully…”

The Rebbe wrote how minimizing the expense will increase the joy:

And on another occasion:

“I completely fail to understand why you find it necessary to place a strain upon yourself and spend elaborate sums of money to hold a large wedding, when what is really vital is for the wedding to be “large” in a qualitative sense…

“That which the world considers to be “large” and “great” (which in chassidic terminology is termed veltishe hanachos, an entirely mundane approach to matters) with a hullabaloo and clamor, is not at all worthwhile for a number of reasons.”

In the year 5727, a father of a soon-to-be bar mitzvah was in yechidus. On a note he wrote prior to entering, he informed the Rebbe of his upcoming simcha. He added as an aside, that since Hashem has blessed him with the means, he plans to celebrate the bar mitzvah with great harchovah (abundance).

The Rebbe answered that the harchovah could and should be with the ruchniyus. The Rebbe’s answer made waves, and Anash throughout the world began being more particular with their spending on simchas.

Following this incident, one bar mitzvah bochur and his father informed the Rebbe at their yechidus, that in the light of the Rebbe’s directive to have harchovah beruchniyus, the bochur will be saying two ma’amorim! The Rebbe awarded them with a broad smile of satisfaction.