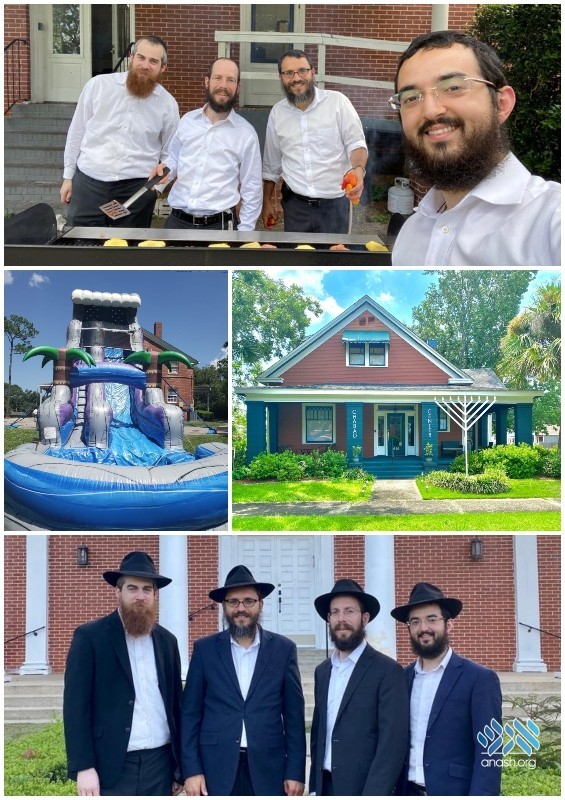 At the mini Kinus Hashluchim in Florida’s panhandle held at the Chabad House of Rabbi Schneur and Chanie Oirechman in Tallahassee, FL, the four Shluchim families committed themselves to purchasing a new Chabad Center before Tishrei.

The four Shluchim families across Florida’s Panhandle met up for a mini kinus at the Chabad house of the head Shliach, Rabbi Schneur and Chanie Oirechman at the Florida Capital’s city of Tallahassee.

The Shluchim took on special hachlotos, starting off by deciding to make more kinusim in the future with the next one taking place before Rosh Hashana.

They also decided to virtually start learning Chassidus together every morning and dedicating themselves to helping Rabbi Mendy and Mrs. Chaya Havlin purchase a home and Chabad Center before Tishrei.

During the last few years, Rabbi Schneur and Chanie Oirechman have brought out three Shluchim to cover all the large cities of the Panhandle. Starting with Rabbi Yeshaye and Rochel Tenenboim who opened Chabad of the Emerald Coast in Destin six years ago. More recently, Rabbi Mendel and Nechama Danow opened Chabad of Pensacola and Rabbi Mendy and Chaya Havlin started Chabad of Panama City Beach.

The shluchim say that a big thank you goes to Rabbi Moshe Kotlarsky for his tireless dedication to make this a reality including arranging a three year grant from Mr. Moris Tabacinic for every Shliach.

But the involvement and care did not stop there. Rabbi Kotlarsky continued to help the Shluchim.

With the generous assistance from the great philanthropists Mr. Moris and Mrs. Lillian Tabacinic, the purchase of the Chabad houses across the Panhandle were made possible.

“The Shluchim and their communities are very thankful and appreciative of the Tabacinic Family and Rabbi Moshe Kotlarsky for their continued efforts and investment in transforming the Panhandle a place of Torah and Yidishkeit,” Rabbi Oirechman said.