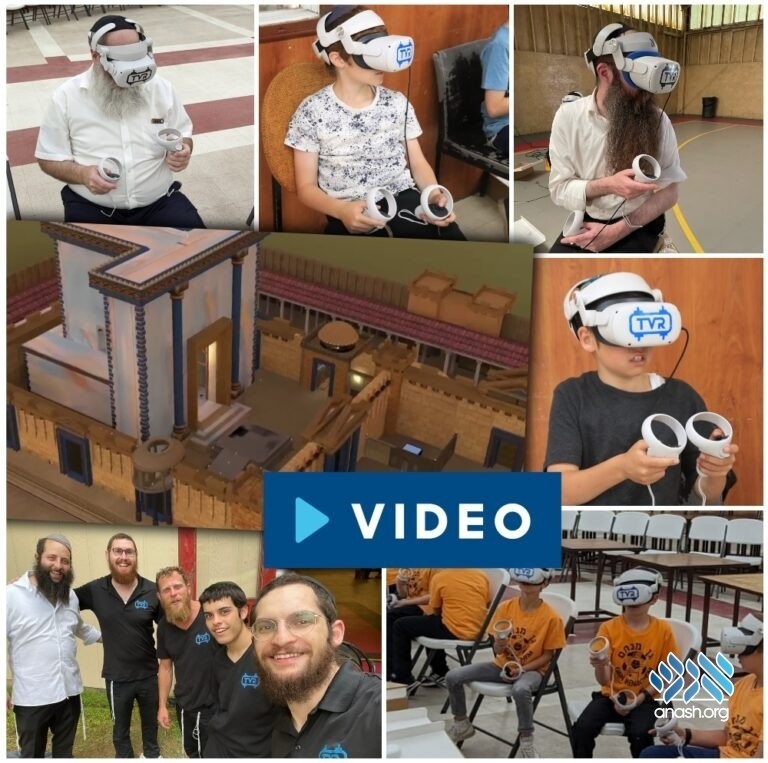 Campers from CGI Montreal, Chayolei HaMelech, and Oholei Torah were amongst the first in the world to play MikDash, a gamified exploration of the Beis Hamikdash.

Nivra, a venture-backed startup founded by Chabad businessmen, released its first product this week. The virtual reality video game, MikDash, where users dash around the Beis Hamikdash at their own pace, collecting tokens and accomplishing milestones, ultimately arriving at the Kodesh.

Over 1,000 campers from CGI Montreal, Chayaolei Hamelech, and Oholei Torah were among the first users. In preparation for Shabbos Chazon, they were given the enviable opportunity to go to the Beis Hamikdash and explore every room, mikvah, and keli in the Beis Hamikdash, for the very first time in over 2,000 years.

TorahVR’s kosher headsets, the first of their kind, arrived in camp this week, enabling 20 campers at a time to play MikDash. This is a small taste of what is coming as Jewish schools worldwide begin to adopt TorahVR into their curricula this coming school year. Educational institutions will have the opportunity to own 25 kosher TVR headsets, enabling each class to use them weekly, with new content uploaded monthly.

The early users were thrilled to have experienced MikDash, one of the many pieces of gamified content that TorahVR will be dropping in the coming months. Over 95% of the gamers had a thoroughly enjoyable experience, with many campers refusing to take off the headset after their 15 minutes of gameplay had come to an end.

One camper was given a TVR headset to play MikDash during his learning class. He was so enthralled by the game, that after being told that his learning class had ended and that he’d need to go to the sports field for activities, he begged for 10 more minutes in the headset claiming that he’d “rather spend time in the Beis Hamikdash than playing baseball”.

Next up, the Nivra team will be in Miami, FL presenting to the attendees of JLI’s National Retreat and giving them exclusive access to MikDash, by TorahVR. In the following week, the team will present to hundreds of educators from around the United States at the Kinnus Mechanchim.