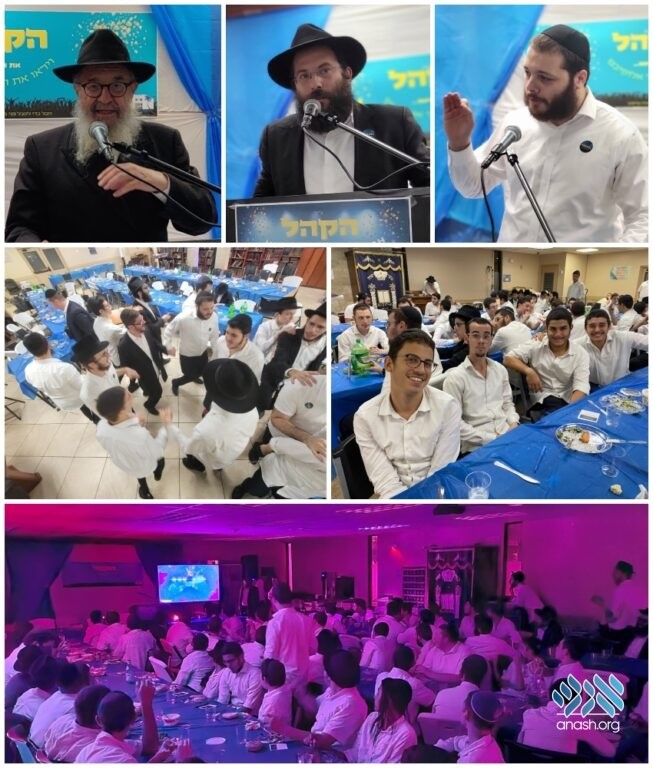 In accordance with the Rebbe’s hora’a of making Hakhel gatherings all throughout the year of Hakhel, the shluchim of both Klurman Mesivta and Miami Zal put together a grand Hakhel melava malka event this Motzei Shabbos – Motzei the Didan Notzach of Beis Kislev.

The Hakhel was held in Zal’s Beis Hamedrash, in order to unite the two Yeshivos.

Emceed by the Menahel of Yeshiva Gedolah, Rabbi Chaim Stern, it included multiple videos of the Rebbe speaking about Hakhel, an inspiring message from the Rosh Yeshiva Rabbi Leibel Shapiro followed by a grand Siyum HaRambam chaired by Hashliach Shalom Ber Gerlitzky.

The Siyum was made by Rabbi Chaim Stern who shared a thought on the halacha that was just concluded. The new Halachos were commenced by the mashpia Rabbi Shmuel Chaim Winter who also shared an anecdote regarding Hakhel.

The event was concluded by Hashliach Tzemach Shanowitz who inspired the crowd on what Hakhel means to every one of us in our day-to-day lives, and reminded everyone to fill out the hakhel card as the Rebbe requested. The event was followed by joyous spontaneous dancing.