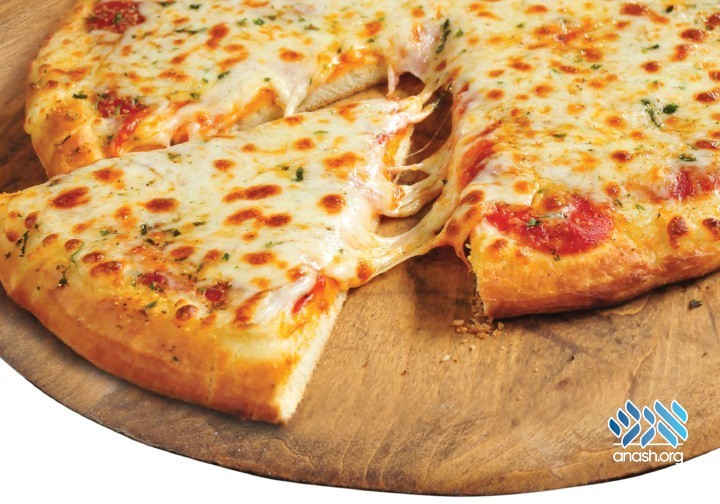 I’ve heard that some pizza is hamotzi and some is mezonos. How do I know?

The Gemara discusses the concept of “snack bread” that is mezonos under certain circumstances. One example is “Pas Haba’ah B’kisnin,” which is interpreted in various ways (see issue 579). The Alter Rebbe accepts the definition of dough made with a majority of liquid other than water, but for a baal nefesh, the Alter Rebbe recommends only pastries with a sweet filling for outside of a meal.

Other examples of “snack bread” are: (1) “Lachmaniyos” – soft pastries made from thin sponge-cake-like dough, which cannot be rolled by hand; (2) “Teruknin” – made from a particularly thin mixture of flour and water but thickens somewhat after being baked or fried, such as crepes or blintzes.

If one plans to eat either his fill or even just six beitzim (336 grams) of snack bread, hamotzi is recited. One who eats four kabeitzim (230 grams) and will be full—including from side foods—recites hamotzi on the snack bread; if full from less, he recites hamotzi over a kezayis of regular bread.

Grain products that aren’t baked, rather boiled (e.g. oatmeal, couscous, noodles) or deep fried (e.g. doughnuts), are not “bread”—which is a prerequisite for hamotzi lechem—and are mezonos not matter how much one eats. When noodles are baked afterwards as a kugel, some hold that it becomes “snack bread” with a potential for hamotzi, but the consensus is that the noodles mixed with eggs don’t constitute dough that is baked, thus they retain their boiled status. Lasagna likewise doesn’t resemble the appearance of bread, especially if it is soft from the sauce.

Some contemporary poskim hold that if one bases a meal on Cheerios or other breakfast cereals, one would recite hamotzi. Others, however, hold that most cereals don’t at all resemble the appearance of bread and remain mezonos indefinitely.

For pizza, since cheese is a meal topping, the topping on its own would not render it “snack bread.” Yet, if the pizza dough is made with juice, and one eats less than approximately 1.5 slices (336 grams) without becoming full, one would recite mezonos. If one does become full from 4 kabeitzim (230 grams), one recites hamotzi.

If one decides in the middle to eat more than he planned, he should first recite al hamichya, wait a little, and then wash and recite hamotzi. (If eating at least four more kabeitzim, he doesn’t need any ordinary bread.)