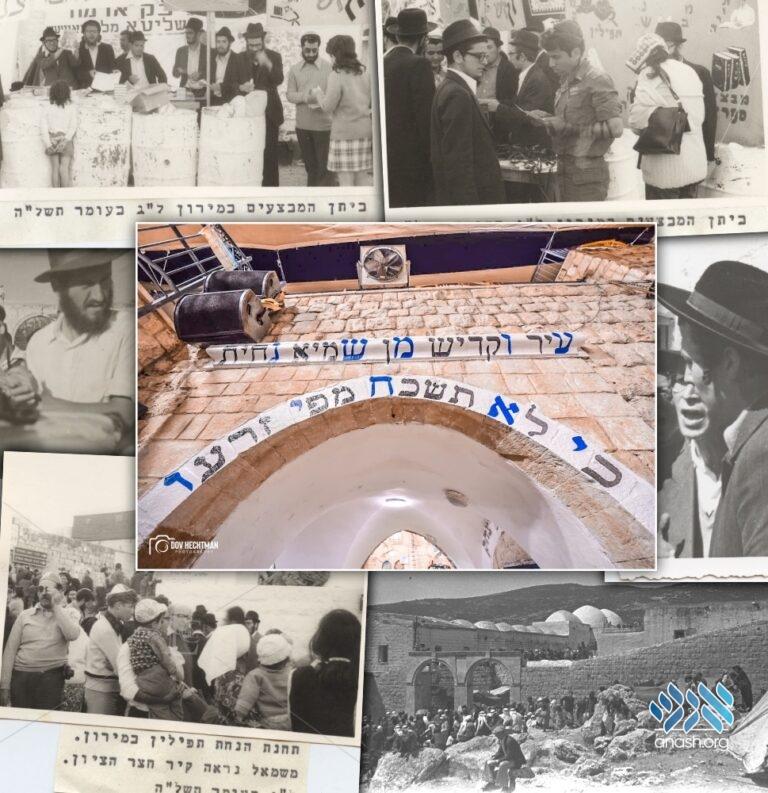 For decades, Chabad chassidim from across Eretz Yisroel would travel to Meron for Lag B’omer, spreading Chassidus among the masses, and offering many a chance to don tefillin. But with the draconian regulations in place this year, the practice is at risk.

For decades, Chabad chassidim from across Eretz Yisroel would travel to Meron for Lag B’omer, spreading Chassidus among the masses, and offering many a chance to don tefillin. But with the draconian regulations in place this year, the practice is at risk.

Anash.org presents an overview of the evolvement of the peulos in Meron over the years, with the tefillah that Moshiach will arrive even before Lag B’omer, and the special day will be celebrated with Rashbi and with the Rebbe.

Before Parades were held all over the world, Chabad Chassidim in Eretz Yisrael would embark each year on a special “mivtzoim caravan” headed for Meiron.

Today, the pilgrimage to Meiron is widely seen as a Chasidic custom, but in days bygone, the site attracted many non-religious Jews each Lag Ba’omer, and they actually consisted of a majority of those present. This presented a unique opportunity for Chabad Chassidim; in 5712, the newly established Tze’irei Chabad decided to utilize the pilgrimage to Meiron as an opportunity to hafatzas hamayanos.

“On Erev Lag Ba’omer,” the trip is described in Bitaon Chabad, “a caravan of five automobiles left Tel Aviv to Meiron. When they arrived that evening, a microphone was set up on the roof of the kever and they broadcast a program of Tze’irei Chabad, including speeches about the Baal Shem Tov, Rashbi, as well as niggunim and chazzaras dach…”

The Rebbe wrote how happy he was to receive news of the initiative. In many letters over the following years, the Rebbe strongly pushed for the continuation of the tradition and encouraged all those “hashayachim lazeh—those appropriate for the task”to make the journey.

The annual tahalucha to Meiron became an official tradition. Dozens of anash would board buses that would slowly make their way to Meiron, stopping off in many towns and cities along the way to speak about Yiddishkeit, and each year, the military would arrange a sound system and radio broadcast for the Chassidim from the roof of Rashbi’s kever.

In 5717, Bitaon Chabad reported a special “Mivtza Hanachas Tefillin,” where “pairs of bochurim made rounds among the endless streams of people and gave more than 1000 people the opportunity to put on tefillin. It was an amazing scene to watch; many of the people pledged to once again begin putting on tefillin every day.” It is important to note that this was a full 10 years before the Rebbe officially launched mivtza tefillin.

The trip to Meiron in those days was a significant journey, which meant that the yeshiva bochurim would miss a significant amount of seder hayeshiva. There were times when the hanhala suggested in letters to the Rebbe that the trip be canceled that year, but the Rebbe always encouraged them to continue.

“Because they did have the custom [to travel to Meiron] in years past,” the Rebbe writes to Reb Shlomo Chaim Kesselman, “it isn’t worthwhile to cancel it entirely and to give place for people to learn pirushim, including some unwanted pirushim [from the cancelation]. On the other hand, there is no necessity that the entire yeshiva make the journey, along with all the teachers and roshei yeshiva etc.”

In a similar letter to Reb Shmuel Eliezer Heilperin, Rosh Yeshivaof Toras Emes, the Rebbe writes that “obviously, it was correct to allow the talmidim to travel to Meiron on Lag Ba’omer, for several reasons, and in this regard it is stated, ‘eis la’asos laHashem vegomer.’

As the years progressed, the Rebbe’s sichos at the Lag Ba’omer Parade began to be transmitted via live hookup directly to Meiron. The Rebbe cherished those hookups; in 5733, when he announced that he would not attend the Lag Ba’omer Parade that year despite how much he values them, the Rebbe also added, “I will admit that I was informed that they would hear [the sicha] in Meiron, because they arranged a hook-up with the military…that is definitely very valuable to me, but nevertheless…”

This Meiron “mivtzoim program” continued for close to thirty years. But then, several days before Lag Ba’omer 5740, the Rebbe announced that it was time for Rashbi to be brought to the Jews outside of Meiron, instructing that parades be quickly organized and held in all cities, especially in Eretz Yisroel.

From that year on, the hafatzas hamaayanos associated with Rashbi was brought to a whole new level, but visiting Rashbi’s physical resting place received less focus. If you want to connect with Rashbi on his day of joy, the Rebbe maintained, the most profound way to do so was through spreading his light to another Jewish child.

This article is culled from “Meiron, the Cradle of Pnimius Hatorah,” by A Chassidisher Derher. To read the full article, click here.